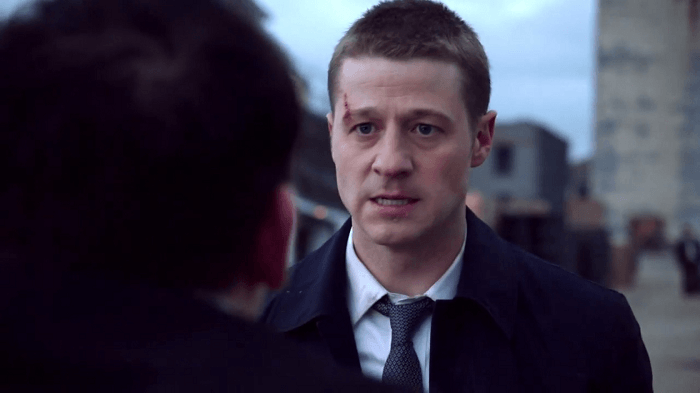 Gotham, which had more pre-show promotion than Beygency membership drives, finally, finally landed on Fox last night with its pilot episode. Since I will not be handling too much recap duty (The Summer of Taj has ended, but let the Autumn of Taj begin!) on these Fall shows, I may gather some thoughts on the pilot episodes for them.

Spoilers be chillin in the fire escape above Crime Alley.

1) Some of the supplementary characters are actually pretty well cast. I imagine that many people will be split on Jada Pinkett’s ‘Fish Mooney’ but as an admitted Jada-Stan, I was ok with it. It’s a little much and cartoonish, but it’s also a “Batman-villain” so what are really asking for here? She handled it well enough for me, appropriately scary and intimidating (and fine for those that care). However, the Donal Logue as Harvey Bullock is probably the most well put together character so far, but John Doman (of The Wire fame) as Carmine Falcone is expertly cast. I assume he will be seldom heard from, but he was easily my favorite part of the pilot.

2) Even without the Easter Eggs and random name drops, it does FEEL like the city of Gotham. The aerial shots of the city with sewer smoke and the great absence of sunshine follow the trope of every other portrayal of Gotham ever, but still, we could use some stability.

3) Of the seventeen hundred proposed villains for this show, Robin Lord Taylor as Oswald Cobblepot seems to be the best primed to be a decent villain on this show moving forward. Mostly because he’s good at being really fucking weird. I don’t know if we ever got a good reason for the other Mooney henchman calling him Penguin since ol boy is shaped like a Bic fine point pen, but I guess the just outright strangeness and personal quirks give him a Penguin-esque personality.

1) Look, the way this show is set up, Selina Kyle will probably be the most engaging character and I’d bet any amount of money that we get a very Selina centric episode within the first few. But that was a terrible start. We all knew how bad the costume looked (as Omar Holmon put it, she looks like teenage Steampunk – Cosplay Catwoman), but the stealing the milk for kittens? The striking a pose at the gates of Wayne Manor? B, you don’t need much to build a compelling story around a homeless girl grifter who pick pockets and outsmarts people, knowing full well she will grow up to be one of the best thieves in the world, so the early Comic Con photo setups are really uninspiring.

2) Can we put a pin in the whole Bruce Wayne and Ivy Pepper characters until like season 3? There is nothing remotely interesting they could even approach to do until they are teenagers. And since Ivy (good Lord, I can’t believe I have to use this name so often) won’t be developing “powers” that let her manipulate plants, I still have no idea what her real function can be in this show.

3) Ben McKenzie my TV cop, I hate it had to be you. Similar to Harvey Dent, I still believe in Ben McKenzie. I’ve seen him do good (though not great) work before. But this grimacing, ultra serious, I am righteousness incarnate version of Jim Gordon ain’t want the Narrows been waiting on, b. The set up of Gordon as the one good cop in Gotham is fine and the tension between him and Bullock? Fine. But they gotta give Gordon a sense of humor. They gotta give us the chessmaster version of Gordon instead of the bullheaded run into certain death without thinking Gordon. If I can’t have glasses or a mustache, at least give me a three dimensional character.

1) I have so many questions with the Barbara Kean character. I’m not trying to stop Erin Richards from getting work and I don’t enjoy discriminating against pretty people, but she is not what I had pictured for the eventual Barbara Gordon. Maybe I’ve been watching / reading too much Batman: Year One, but you’re gonna have a hard time convincing audiences if they ever do the Barbara is pregnant and Jim starts having an affair with Sarah Essen storyline…Which is even weirder since Captain Essen implied some past “history” between her and Barbara. I mean…what do we even do with that?

2) If in fact, that was supposed to be some wink-wink at the Joker when Mooney was interviewing the comedian in the night club, then I need him to not seem so horrified at some PG violence. I know the retconned origin has the Joker not getting “strange” until after he takes a dip in some toxic waste in his brief stint as the Red Hood, but if you’re going to give us all these other tongue in cheek moments, a little hint at the sadism wouldn’t have hurt there.

3) I’m not the first to bring this up, as Keith Chow mentioned this on the Hard NOC Life podcast we recorded last week for TheNerdsofColor.org, but there is a fundamental problem with so many of these characters since Bruce is only ten years old. Outside of Ivy (ugh) and Selina, Edward Nygma is in his mid to late 20s. Maybe. Same for Cobblepot. Falcone gotta be like 50 – plus. Who the hell will Batman be fighting again, the Old Folks Rogues Gallery? The Early Bird Special Crime Syndicate? For a moment I almost got caught up and wondered if we’ll see Harvey Dent. But would there be anything more annoying than a 12 year old with a White Knight complex? Actually thankful for Gotham leaving SOMETHING out…so far.