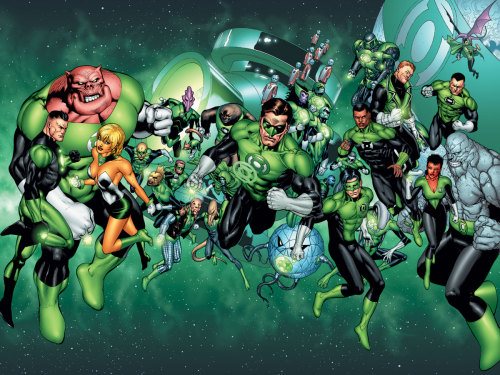 It should be noted that I am a big DC fan. Even after the heavy (and deserved) criticism of the New 52 launch, I still read all the big books regularly, and enjoy a good number of them, even as comic fans have fled their flimsy story lines like affluent folks did the cities (if they come back, does that classify as gentrification?). Having said that, I’ve got plenty of thoughts on how they are shaping their movie universe, which has little to do with comic mythology and more to their method of moving making. Part 1 and Part 3 of this series.

The Big Green Construct in the Room: Why the failure of the Green Lantern movie means so much to the DC Movie Universe

Regardless of whatever debate rages about Man of Steel or over Zach Snyder being the controlling hand for the DCU movie franchises (and there is plenty to debate on both sides) one thing we can all agree on is that the Green Lantern movie that hit theaters in 2011 was horrendous. Like the destruction of Oa bad (sorry for those of you who haven’t read the Lights Out story arc in the GL books).

If Green Lantern, headlined by (at the time rising star) Ryan Reynolds as Hal Jordan, had come out five years earlier, we’d talk about the film and its impact very differently. Looking at Sam Ramii’s Spider-Man trilogy or the Fantastic Four films, you could get away with campy, bad pun wielding characters in your comic book movie because that’s what was expected. Adults, who had little interest in the source material were just taking their kids to see the movie that matched the toys that littered their home. Everything changed in 2008 when Iron Man hit the theater and everyone said, “wait…are you sure this is based on a comic book? ‘Cause this movie is really, really good without the cheese.” The Dark Knight broke the theater 2 months after that, it was all she wrote. We’ve never went back. And so Green Lantern, which would’ve have been bad in any era, just wasn’t going to be tolerated for its lazy writing, cardboard supporting cast and disinterested leading character (well, “man,” lets keep it 100 here, we’re still talking about men almost exclusively). As a bomb in Hollywood rarely has small repercussions, the failure of Green Lantern caused a ripple effect that damaged the brand, stifled interest in future films and indirectly contributed to the cancellation of the critically praised Green Lantern animated series after just one season. All these are reasons why Zach and his merry men might feel justified on cutting bait on the Green Lantern franchise, but that would be a mistake, because Green Lantern is vital to the DCU. As far as individuals, I can understand why the priority casting for the upcoming DC movies have been Batman and Wonder Woman. As far as heroes, DC has a big 3 that can’t be ignored if you have hopes of representing the best of their universe. However, for all the rumors of other casting possibilities like Cyborg or Nightwing floating around, there has been next to no speculation on the next Green Lantern. With Green Lantern being just a few years ago, it doesn’t get the same benefit of being from a “previous era” like the other bad comic book movies it resembles, but if Snyder and company can reintroduce Batman just a few years after the most successful comic book adaptation in history, then they can certainly sell the next Green Lantern as a completely different entity from its previous counterpart as well. And if you’re building the big DCU, you need GL. If you’re planning on doing a Justice League movie, you need GL. Or more astutely, you need the GL Corps. From a purely aesthetic argument, for visual effects, you can’t do much cooler than the spectacle of the power ring. Also, like the potential for Wonder Woman, Green Lantern’s domain is larger than Metropolis or Gotham or Earth, for that matter. The Green Lantern universe is just that, a Universe. The on world – off world dynamic to the Green Lanterns are almost built in for movie logic and continuity of story. You combine that with the fact that Green Lantern is a whole army and not limited to one person, ie, one actor, it gives so many unique possibilities for casting. Don’t have availability of one actor? It’s ok, that Lantern is “off world, during movie, at least we have _________ here.” Also, the GL universe has the ability to have stories on Earth and crossover with the other Justice Leaguers or have completely isolated stories in another part of the galaxy.

The casting options are another reason that Green Lantern is necessary. Look, Wonder Woman is the most famous female heroine. Period. So DC isn’t getting any credit or receiving any complimentary hand-jobs for finally casting a female super hero in their universe. And they shouldn’t. We’ll revisit this if/when they announce a Wonder Woman film, but even if they do, it will really be past due. Casting John Stewart as the next Green Lantern helps a lot of DC’s, how you say, diversity challenges.

They get to cast another impactful character, he’s a POC in original form (God forbid we have another Michael B Jordan situation on our hands…by the way, that’s 100% snark, we could use more chances taken with stock white characters, but I digress), and Stewart actually has recognition from the Justice League animated series. In fact, plenty of people were scratching their heads when Ryan Reynolds was cast in the GL flick because they expected to see the character from TV. While it would’ve been nice, I wasn’t calling foul when Hal Jordan was the Green Lantern the movie centered around because its Hal “Fuckin” Jordan. But if you want to do a full reboot to waft away the stench of the previous film, casting John Stewart is pretty damn good start.

Lastly, and admittedly the most ambitious reason to integrate GL into this new DCU is that for the last few years, it has possessed some of the best storylines across DC. The biggest tragedy of the Green Lantern movie flop is that we didn’t get the natural sequel, the Sinestro Corps Wars, which is in the conversation for best large event story for DC in the last ten years. Speaking of which, there’s no reason Sinestro shouldn’t be given (or resurrected, poor Mark Strong, the only good think about the movie) life on the big screen as a movie’s primary big bad.

No one is going dispute the strength of villains like the Joker or Lex Luthor, but they are also pretty black and white characters as far as morality. Sinestro is the definition of anti-hero / villain. His idea of order and morality is much grayer than your typical villain. The fact that he was a hero (and the best hero) before becoming a villain (and back again), there is too much complexity to leave on the table if he’s not involved. The other huge event that GL provides to the DCU is the Blackest Night / Brightest Day arc. It’s ambitious, and a huge risk, but it is the ultimate get out of jail free card if they ever wanted to kill a hero in one of the movies and bring them back (Crisis, Doomsday, etc).

The fact that DC has this huge advantage over Marvel because, unlike Marvel, their entities aren’t spread over different production studios (the reason you won’t see a Civil War film Spider-Man, Daredevil and the Avengers or even, good God, an Avengers vs X-Men film), it means that no big crossover in the DCU lore is off the table.

We all understand the punchline that was Green Lantern and for those who aren’t intimately familiar, they may be willing to write off the will power slinging Gawds, but the reality is (thanks to Geoff Johns), the GLs are too important to be scrap heaped this early in the game. And besides, the world deserves a better looking Kilowog than what we got before.