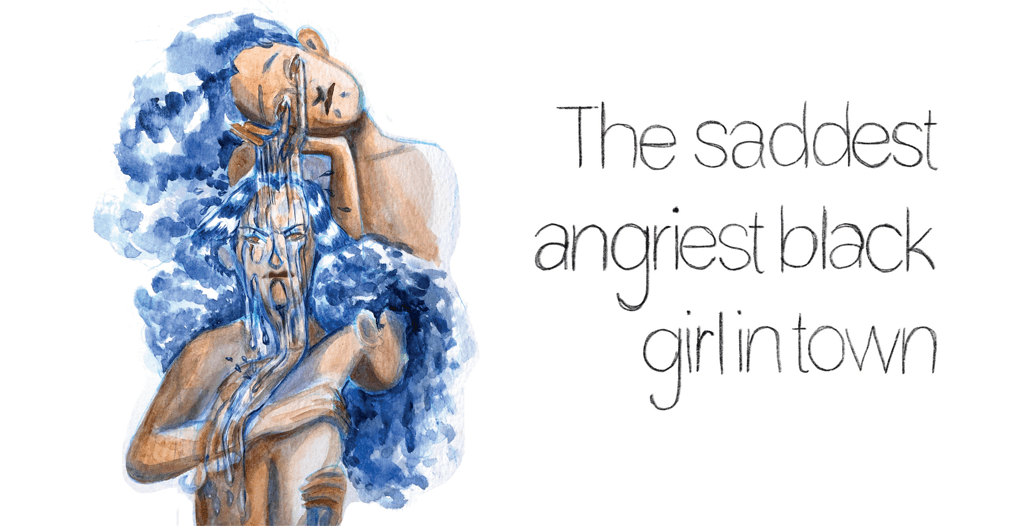 Originally, I know creative Robyn Smith as the artist behind fave Wash Day (which is headed for a graphic novel adaptation titled, The Wash Day Diaries, to be published by Chronicle Books in Fall 2021!) She’s been busy with Nubia: Real One–the YA take on one of DC Comics’ most beloved characters is being published later this month.

She’d had previous work published that I did not have a chance to get my hands on before. The comic was originally self-published by Smith in 2016 and was named one of the best short-form comics of 2016 by The Comics Journal.

Thankfully, Black Josei Press, a press started up by her Wash Day better half, Jamila Rowser, is republishing the out-of-print The Saddest Angriest Black Girl in Town, with a new cover and never before seen process pages.

What is This Comic About?

“The Saddest Angriest Black Girl in Town is an autobiographical comic dedicated to exploring the intersection of Blackness and mental health. It speaks to the contradiction/dilemma of being invisible while simultaneously being hyper-visible.

“To be a Black girl in a majority white space is to be ignored but constantly observed. Feelings of isolation and anxiety push the story along to reveal that this experience, while super specific is completely understood, by those who experience the same. Black women.”

I’m always game for auto-biographical comics, especially those by Black women. Furthermore, I’m also interested in reading more about this intersection of Blackness and mental health on the page via comics. The auto-bio comic takes the reader on a journey through three chapters: Sad, Angry, and Black. The artist and writer, Robyn Smith mentioned on Instagram on how the work came to be made : “I made it after having a hard time expressing my feelings about being one of the only Black persons for miles, while living in White River Junction, VT.” Who might this comic be for? I’d say fans of such work like Ben Passmore’s My Black Friend and anyone familiar with comics that have been featured in zines.

Black Josei Press is a comic book publisher focused on amplifying stories by and for Black and Brown women. It has published the award-winning comic Wash Day, the sci-fi twerking tale Wobbledy 3000, and the upcoming Egungun. With support of this KS campaign, as a small, independent publishing company, they’ll be able to raise money to pay for at least 200 print copies of the comic as well as fulfillment costs and worldwide shipping. The comic is finished and ready to be printed! Digital, DRM-free PDFS of the comic will also be available along with some limited availability of the original comic art pages.

The Kickstarter campaign for The Saddest Angriest Black Girl in Town launched this week and will be active for 28 more days! Check out the link and pledge to support more Black women in comics and more comics that exist outside the massive superhero genre. EDITOR NOTE: Looks like the campaign was fully funded within the FIRST DAY! Follow along with the campaign page for further updates!

Robyn Smith is a Jamaican cartoonist, currently based in NYC. She has an MFA from the Center for Cartoon Studies and has worked on comics for the Seven days Newspaper, College Humor and The Nib. She’s best known for her mini comic The Saddest Angriest Black Girl in Town and for illustrating Jamila Rowser’s comic Wash Day. Besides comics she spends most her time watching American sitcoms and holding on to dreams of returning home, to the ocean. See more of her at her personal website, on Twitter and Instagram!