Technically, Raylan Givens isn’t a cop, he’s a United States Deputy Federal Marshall, which makes him cooler than your average cop with slightly less power than an FBI agent. But who needs power when you “got yourself a gun” and are the second coming of William Munny from Unforgiven. I previously wrote a column about my struggle in embracing TV cops with the recent surge and awareness of police misconduct and brutality, but as I believe (and was pointed out) Raylan isn’t really one of those cats. He’s just an old school gunslinger who gotta be top 5 law enforcer on TV. Period.

(I’m fully aware that the last season is still going and that there is some irony in doing a “dead or alive” on Raylan as we don’t know if he will survive the end or not. But I still wanted to drop this before we know that for sure as that could make this a very different write up). Inside the first 3 minutes of the show and throughout its six seasons, there is one undeniable fact: If you get into a stand-off with Raylan, “There’s gonna be a whole lot of slow singin’ and flower bringin’.” To quote Prop Joe, “That brotha got more bodies on him than a Chinese cemetery.” Don’t matter if criminals come at him with some 10 foot rule knife nonsense or if they think they’ve got him outgunned, Raylan always has the same answer for the God of death: Not today. Unlike Han Solo, Raylan is so good, he coined the phrase: He drew first, then I shot him. Raylan out here giving running starts in gunfights, fam.

Seriously, we gonna act like Timothy Olyphant isn’t Zeus’ only begotten son? We gonna act like this dude doesn’t look like he was once an Olympic level swimmer (cuz he was)? Nah b, TV is for the pretty people and Raylan stay stopping Harlan intersection traffic. Raylan not only has had his rendezvous with all the gorgeous women on the show (for which there are plenty of), but also, his partner Rachel has commented numerous times on how he’s “easy on the eyes” and she don’t even like that dude.

Also, you know why Gary Cooper ain’t walkin’ through that door? Cuz Raylan Givens is. This cat got the most iconic male walk since Denzel was wearing red pinstripes suits before he converted to the Nation of Islam. Do we even need to talk about that hat? Y’all wanna talk about that hat some? Naw, we don’t even need to go there, fam.

Even Raylan acknowledges that a turn here and a break there and he could’ve been an outlaw just as easily as a lawman. Lord knows Harlan County tried to make him that way. His pops Arlo was a career criminal who’s been pullin’ misdeeds since the Truman administration. But the only real dirt that Raylan has done was digging coal with Boyd Crowder back in the day. 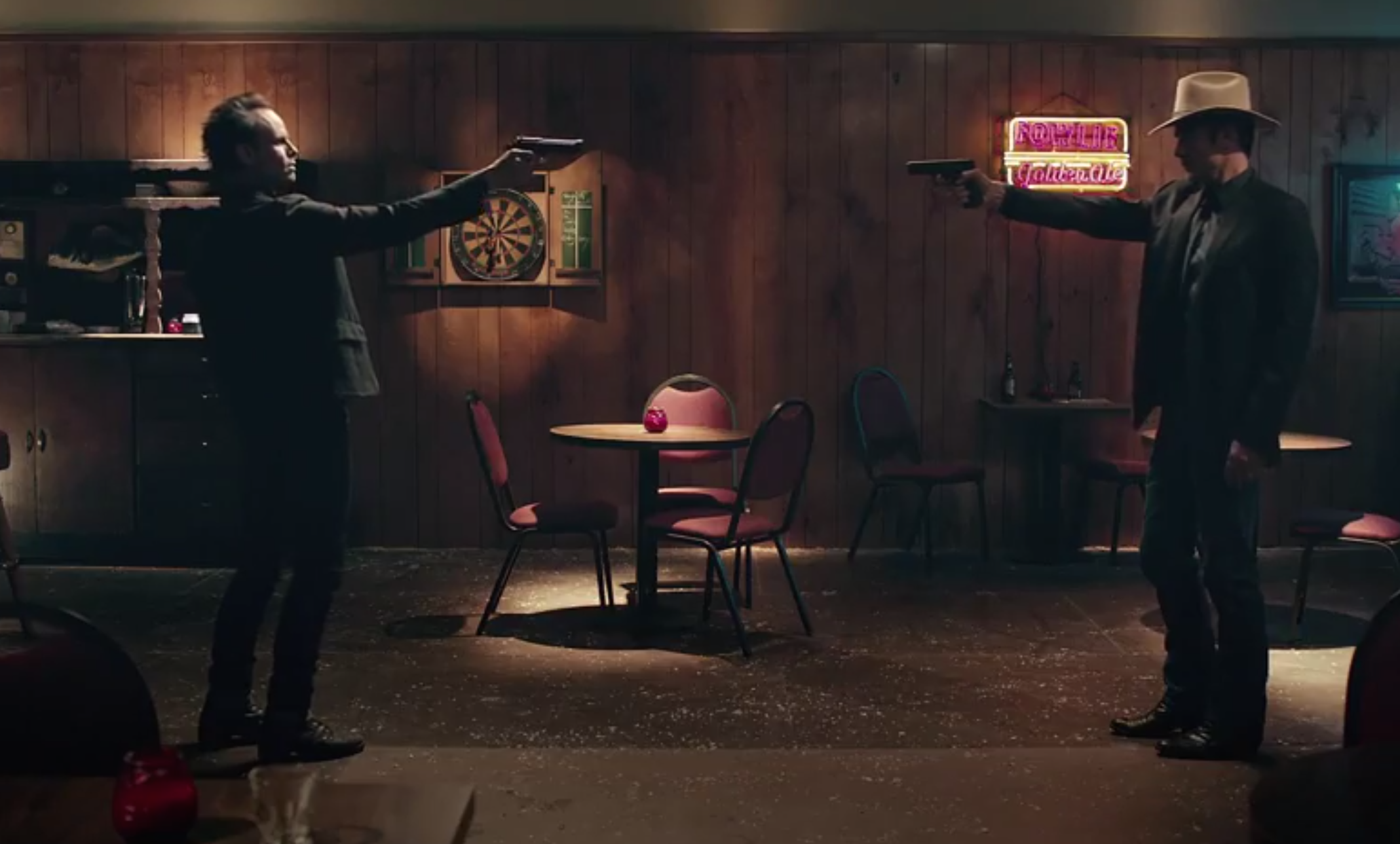 Still, your boy loves to get his gun off, Rocket Racoon style and probably got some shoulder tendinitis from holding his arm in the “go for my piece” position so much. Let’s not act like Raylan don’t live in the grey area of his “Federal responsibilities” either. Whether its knocking around a suspect for questioning, helping his ex-wife return some money she stole from evidence or smuggling a federale across the U.S. Border, Raylan still takes rules and regulations as “mostly outdated suggestions.”

4).”Spit your game, talk your shit / Grab your gat, call your clique.”

Credit the writers obviously, but coupled with Olyphant’s delivery and draw and Raylan might have the best mouthpiece in the game. Everyone on Justified got charisma for days, but because there’s always the threat that Raylan might shoot you afterwards, his one liners tend to carry more weight.

I still contend that the “next one’s coming faster” threat is number one with a glock 9 bullet, but he usually has his best exchanges with his arch nemesis, Boyd Crowder. Boyd is no slouch either, as Nicky Augustine stated “uses 40 words when 4 will do,” but Raylan is the only cat on the show that can keep up with him.

One word of advice if you find yourself talking to Raylan: if he tells you that you need to leave town, don’t talk back, to try to save face and by all means don’t reach for anything, including conclusions. Just go ahead and get to the crib and call a realtor. Moving on the quick like that ain’t cheap.

At the end of the pilot episode, your boy’s ex-wife states, “Raylan, you’re the angriest man I know.” NO DOUBT WINONA, YOU AIN’T NEVER LIED (well, maybe she has once or twice). Raylan is a scary ass dude on a regular day. That dude puts three center mass on a fool without his blood pressure rising a bit. But when he lets the Hulk out, naw man, y’all gonna have to give that man space and worry about city repairs later. What makes Raylan upset? Besides everything? Well, you could try to hold his wife and unborn daughter hostage.

Or try to send some flunkies to kill him. Or murdering a state trooper because you thought it was him, don’t matter if you kin or not. Raylan don’t mind scorching the Earth one time or fifty and letting that shit grow anew if that’s what it takes for him to get his man. They tell you to channel that anger in a constructive way, but for Raylan, nothing is more constructive then the business end of his sidearm.