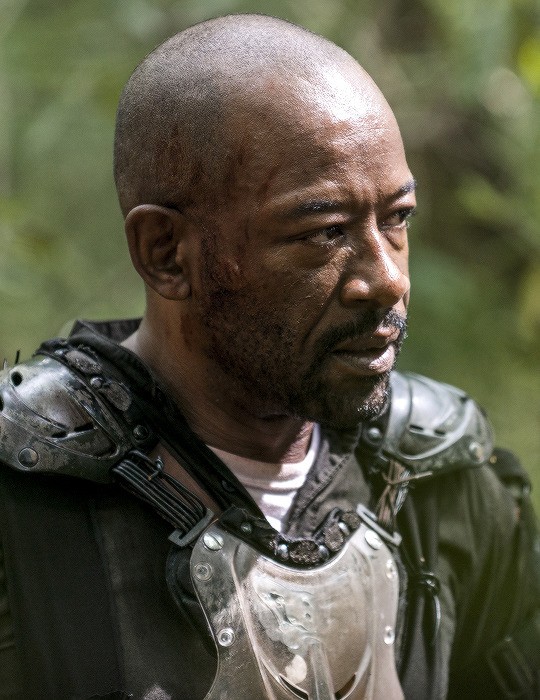 So now that we got the recap out of the way, can we talk about Morgan, right? So I’ve been rooting for Morgan to return to the killing side since… forever. At least since the episode no one needed.

And now I got my wish. But I’m torn. Because we know Morgan was holed up in a ghost town of his own design, equipped with curmudgeonly old man mountain recluse type boobie traps, we know he was in a dark place for a long time.

Because of the white savior who teaches Morgan Buddhism from a well-worn paperback book episode, we know Morgan struggled with his desire to bludgeon to death everyone he encountered. Eventually, he suppressed this desire (after getting his fake mentor killed in the worst choreographed walker in the series’ history) to murderdeathkill everyone. Like most converts, he was the most zealous. It was like he was a vegan.

So the pendulum swung over to “let me escort this spider outside lest it come to harm.” Okay, cool. I didn’t like it. I didn’t think it was practical. I didn’t think it served the group (or Morgan himself). In fact, it actually put everyone id danger. No, I haven’t forgotten the time you tried to keep a Wolf alive in captivity (which was really just a setup for a subplot redemption story).

So I should be happy that the killer has resurfaced. But. But I can’t be.

Now I won’t lie and pretend I was like all the whole here for the Morgan “John Wick Highlight Reel” Jones comeback, but the more I sat with it, the more I felt like an asshole.

LMAO, Morgan went from Thou Shalt Not Kill to John Wick after the dog #ThewalkingDead #Demdeadz pic.twitter.com/UmqBIL0gVI

The thing is Morgan, cold on the inside killer Morgan, isn’t a healthy Morgan. Say want you want about Rick’s waxing and waning killer instincts (and I will), but he has a support group. He has a partner who has herself battled internal demons and come out on the other side able to love. He has a son who killed his own mama minutes after she gave birth, but he is able to love his step-mom (what else we calling Michonne to Carl?) and have adprable teenage romance moments with the town’s only emo girl. He has a brother in Daryl. He has a support system.

We haven’t seen Morga have none of that. Morgan has Morgan and [looks at Sasha lying in a piled of twice-dead walkers] we know what happens when people are pushed past their limits.

This? This walking into danger with a false sense of immortality isn’t exactly bravery. It’s a cry for help. It’s depersonalization. It’s a dude who may be experiencing the same PTSS that led him to seclude himself in that room (where he stabbed Rick). So we can call him a badass or a hero or say, as I did, “finally!” but then what are we– what am I saying to my friends around me who are in crisis or who are processing trauma? When I think about it, it sounds a lot like I’m saying, “IDGAF about your healing. Get TF on with it” wherein “it” is whatever is most convenient for me.

So yeah [downward inflection] I was excited to see Morgan go to war with the Saviors but in the immortal words of Switch:

Because what to happens to Morgan when he has to reconcile who he truly is [hint: not a cold-blooded killer] with what he done?