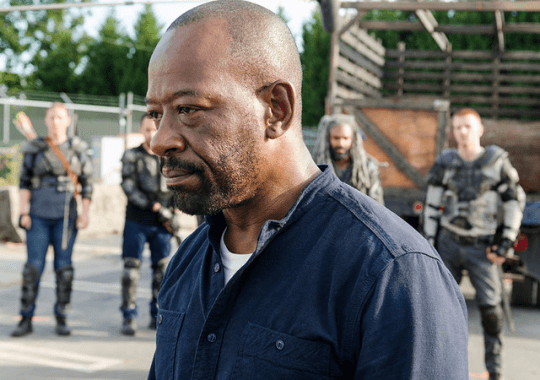 We got that throwback Morgan in this week’s episode. By that I mean, let’s talk about trauma.

That means we have to start with what Morgan has been through and how he managed to cope with that past.

Season 1 Morgan, the Morgan we see the least of, is the Morgan doing—or at least trying to do—what has to be done. He is protecting his son Duane. He is also haunted by the ghost/walker of his wife Jenny who he knows he must shoot, but cannot.

It’s still early in the timeline—early enough that the people we know now didn’t exist. Morgan was just a widow. Carol was an abused wife. Tara was living in an apartment with her sister, niece, and dying father. Michonne was a mother living in a government shelter with her son and boyfriend. Rick was looking for his lost family. They were not killers. They were people going through a traumatic event and dealing with it the best they could.

And then something happened. Sofia wandered out of Herschel’s barn a walker. Michonne’s son was killed by walkers because, in part, of her boyfriend’s negligence. Tara helped kill innocent people because she believed the lies of a sociopath who happened to wander into her life. Rick’s wife died. And Morgan? After he lost his wife, after he looked at her through the scope of a gun and could not kill the thing she had become, after he saved Rick, then he lost his son.

And they were changed.

That’s what trauma does: it changes you, fundamentally. Carol calcified into the killer I have known and loved for so many seasons. Tara’s guilt compelled her to become a dedicated friend and community member. Rick broke (briefly?) with reality and had literal conversations with his ghosts on a dead telephone line. Michonne dragged walkers around with her and walked, shoulder-to-shoulder, with the rotten. Morgan broke not-so-briefly with reality and became both hyper-vigilant and hyper-violent in his mission to keep his corner of the world “clear.”

Each of these people had to find some way to keep going. From the outside, it might look extreme. But who gets to tell a survivor how to survive? It’s easy in the context of the show to allow these people their coping mechanisms. We can forgive the domestic violence survivor her pendulum swing to the side of dispensing violence. We can understand why Tara, having contributed to the deaths of Herschel and countless others at the prison is willing to risk her life for the Alexandrians in general and Glen in particular. We don’t exactly fault Rick for ripping a man’s throat open with his teeth to save his son from assault. And we don’t ask Michonne to speak or to smile; we allow her to do that on her own schedule.

And Morgan? We see him “clearing” and then fighting with Rick. We want him to come back, but having lost his wife, having seen his som die, we understand why he wouldn’t want to. We aren’t happy Rick gets hurt, but we understand why Morgan is defending himself—and it does not matter that he is defending himself against a non-threat. Everything is a threat when you are trying desperately to survive. Morgan—in that room, with that writing on those wall, in that town, with stakes and the traps and warning—is trying to survive and we accept it.

I was not a fan of the Morgan backstory episode for a number of reason, but in context of Sunday’s episode, at least one of those reasons is that a survivor doesn’t owe you their story. It is not their job to become more palatable to you or to win your approval of their tragedy or to provide with the details you might desire in order to validate their story.

But the episode exists and so we know that Morgan was introduced to the coping mechanism he uses now (pacifism) by Eastman. We know that it was a hard journey for him and one he chose because he wanted to survive. If, and I believe this, we are all only doing the best we can with the tools we have, then Eastman gave Morgan a tool. And he used it. Obviously the tool was literally the staff (fashioned from a stake to embody the change that Morgan was undergoing).

We know now, as we might have suspected then, that when the tool of Morgan’s pacifism was taken away by the Saviors, it was foreshadowing. When your method of self-preservation is taken away what do you do? Morgan did the best he could. It’s notable that he held a gun and pointed at a man. This is far removed from the blunt-ended staff we’ve seen him with for so long. When Benjamin dies, a part of Morgan unravels. We see him in the street flashing back to the places he’s been. It looks as though he will revert to the man who clears.

When Morgan realized it was Richard who set the events of Benjamin’s death in motion, a part of him unravels. When Richard tries to explain the nobility of his intentions, you can see Morgan shifting.

When Morgan beats Richard to death with his bear hands, when he uses Richard’s own words, when he at once avenges Benjamin’s death and takes up Richard’s fight against The Saviors, we see a man still trying to survive. And still, being changed. Change is not, as we know, always a forward motion. He confused Benjamin’s name with Duane’s. He returns to violence with Richard’s death, with the sharpening of staff into, once more, a spear. Trauma will burn a path into your body and you will walk it when you aren’t sure what else to do. Morgan has used violence to survive before; why not now? What struck me most about this episode, after Richard’s death was Carol. She gave up her away-but-not-away home because Morgan needed it more than she did. This, too, is what survivors do: make room for other survivors; take turns being the one in need of care and the one caring; what must be done.

It’s easy to allow these fictional characters who are not in our families or in our communities or in circles of friends to grieve and mourn and survive however they must, and yet

and yet, what kind of blood debt do we ask of the actual living survivors whose trauma walks with them like a pair of armless, jawless Walker; whose hurt drives them to the edge of town to just be alone because people have become too much; whose guilt makes them keep secrets they shouldn’t for too long; whose hurt changes them into a new person;whose compounding loss builds a room in their head and covers the walls with words they don’t know aren’t true.

How far removed do you think that is from actual trauma survivors?