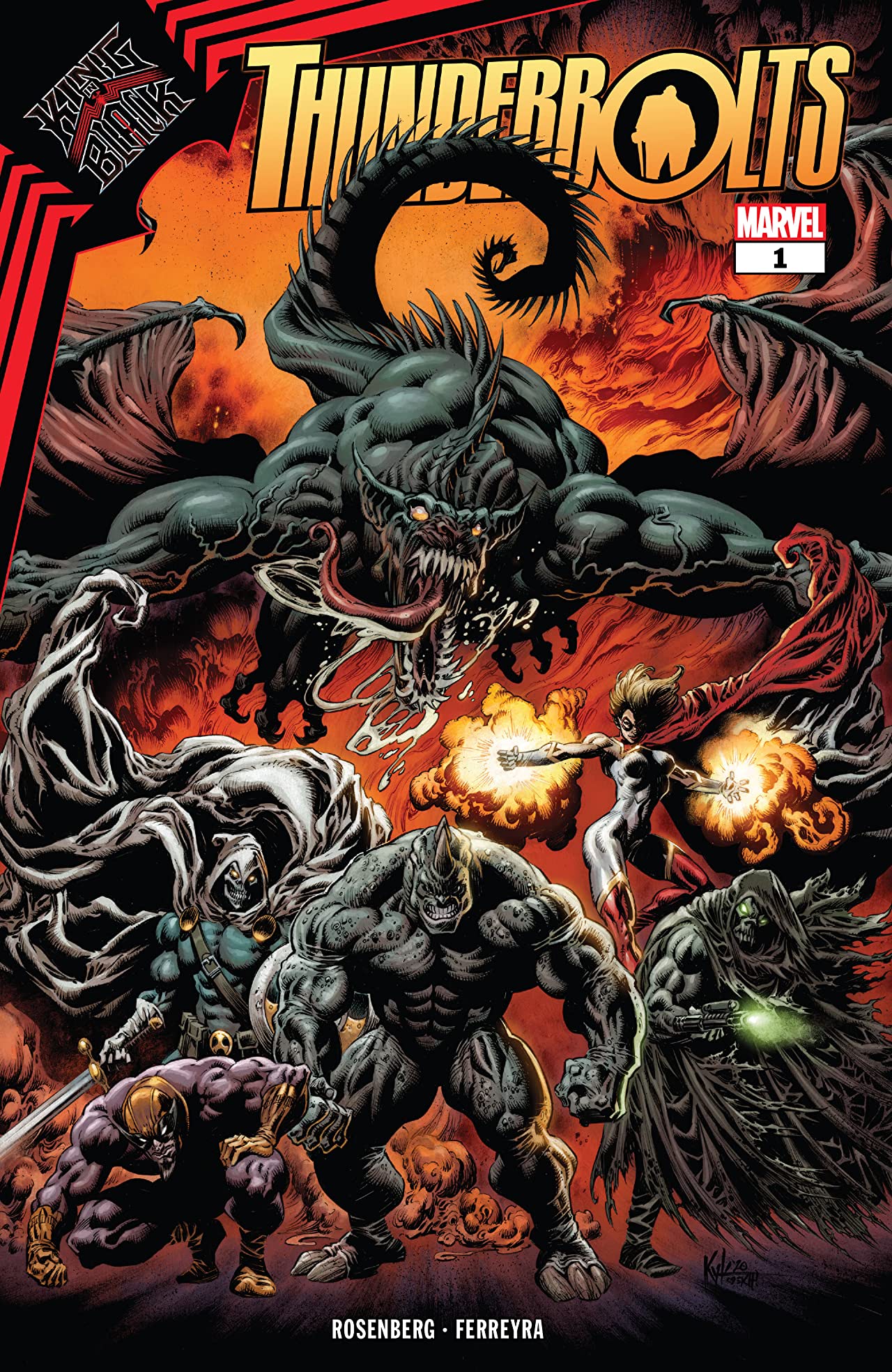 I’m normally cynical when it comes to the planning and execution of Marvel events and the various tie-in books that follow them. I mean, let’s be honest, most of the time I have a right to be. Take King in Black: Thunderbolts #1. It’s a bit strange to begin a new series as a tie book in the middle of an event. However, I’m always happy when a book presently surprises me and the first issue of Thunderbolts does that by taking full advantage of this event to create one of the most fun and chaotic books I’ve read in a long time.

The premise is simple. Being the Mayor of New York, the Kingpin wants to take credit for stopping the invasion of Knull and his symbiotic army. In order to do that he needs a team. Not just any team but one he can control. So, of course, he enlists a group of criminals to act as heroes on his behalf. They have two choices: do the job and become rich or refuse and be locked up or killed on the spot.

Sound familiar? Yeah, there is no denying that Thunderbolts has essentially become Marvel’s version of The Suicide Squad. Writer Matthew Rosenberg has run full steam ahead with that idea, straight to its core. Well, imitation is the sincerest form of flattery. Here, there is a lot about this book that mimics the atmosphere of a Suicide Squad book and it just works. The situation is chaotic, the team filled with nothing but egos, insane personalities, and selfish pricks, and they are totally unprepared for what they are being thrown into.

It’s not unsurprising. Grouping together random villains and expecting them to work towards the same goal never really works out in the end. It’s a bad batch of characters for anything to go right. The writing is on the wall, and it’s great to watch unfold. Rosenberg has a great selection of villains, including notable ones like Rhino, Taskmaster, and Batroc. The best part is never knowing what any particular character is going to do or who is going to bite the dust. It keeps you on your toes and if this first issue is any indication, no one is safe.

Juan Ferreyra’s artwork perfectly matches the comic’s dark and comical tone. He’s especially great at the facial expressions matching the crazy nature of all its characters. Ferreyra’s panels and Rosenberg’s story pair well together. I would say that Thunderbolts #1 is like watching a train wreck happen in real-time, and I mean that in a good way. You already know everything is going to go wrong, but how is fun to watch and keeps you guessing.

9 Unmasked Villains out of 10