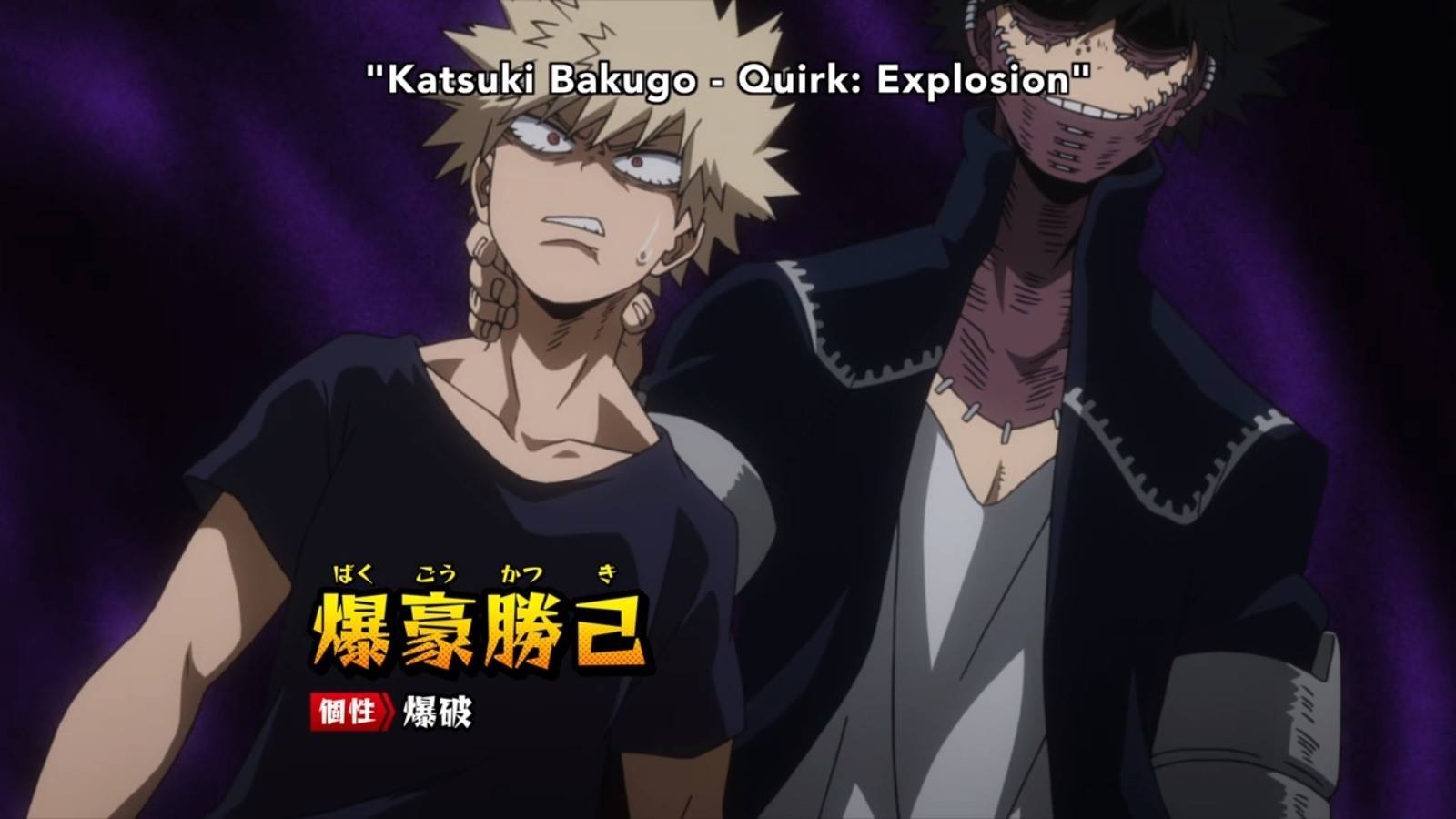 Remember David Xanatoss? He was the goatee-wearing, ponytail-sporting Big Bad of the classic cartoon Gargoyles. His plans were so convoluted and twisted that a trope was invented to describe them. Called the Xanatoss Gambit, the trope describes any plan where every possible outcome benefits the plan’s creator.

I bring this up because it’s important to what makes My Hero Academia‘s villains work. The villains of MHA are essentially involved in an ongoing Xanatoss Gambit- while they may express explicit goals from time to time (killing All Might, capturing Bakugo), those are means to the final end of destroying the superhero society. The faculty of UA High acknowledge as much. 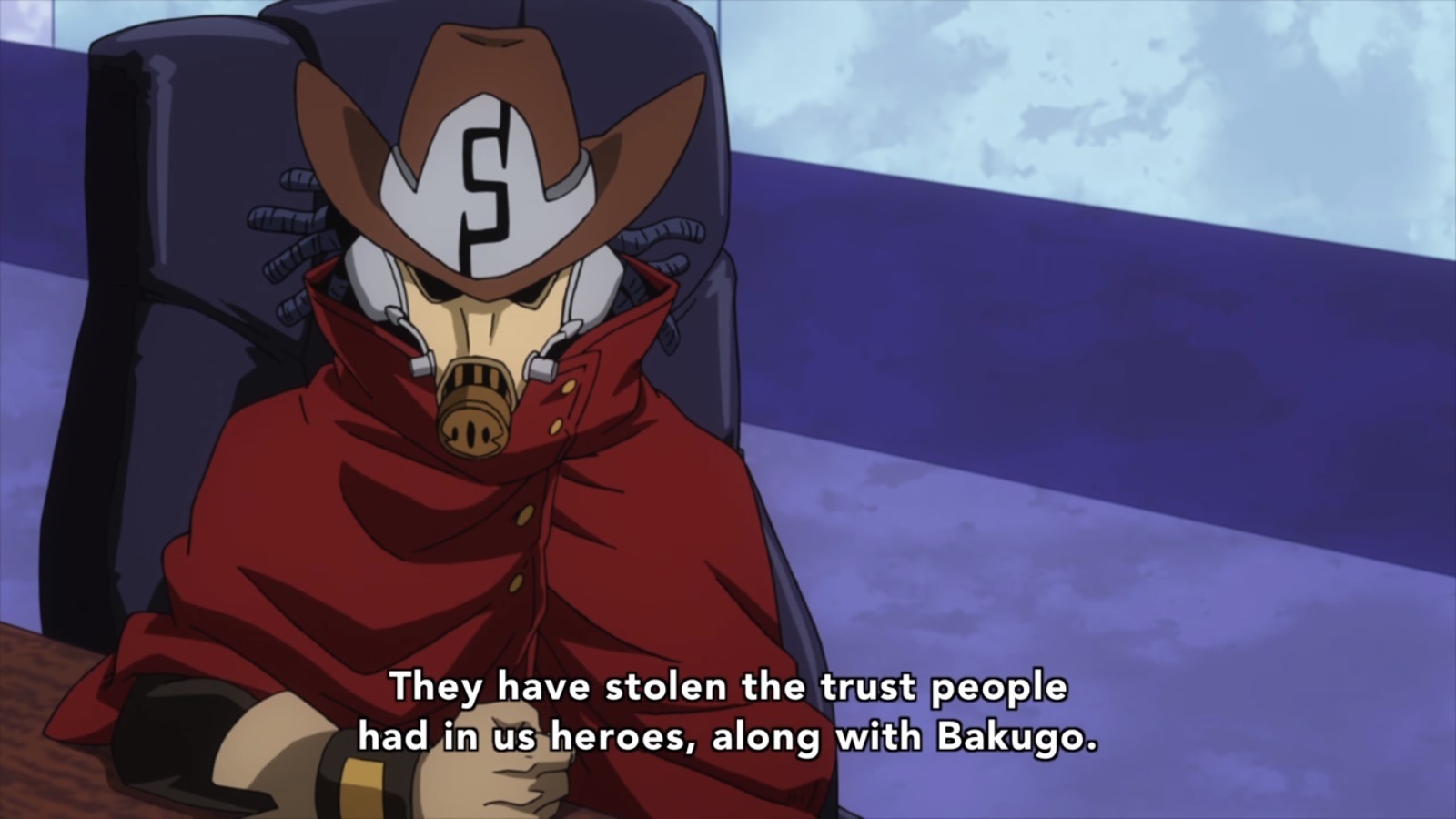 Every attack from the villains undermines the public’s trust in the superhero society, even if the goals of each attack aren’t met. The villains have turned UA’s openness against the school, using the Sports Festival as intelligence for their operations. They’ve even managed to plant the seeds of distrust amongst the UA staff. 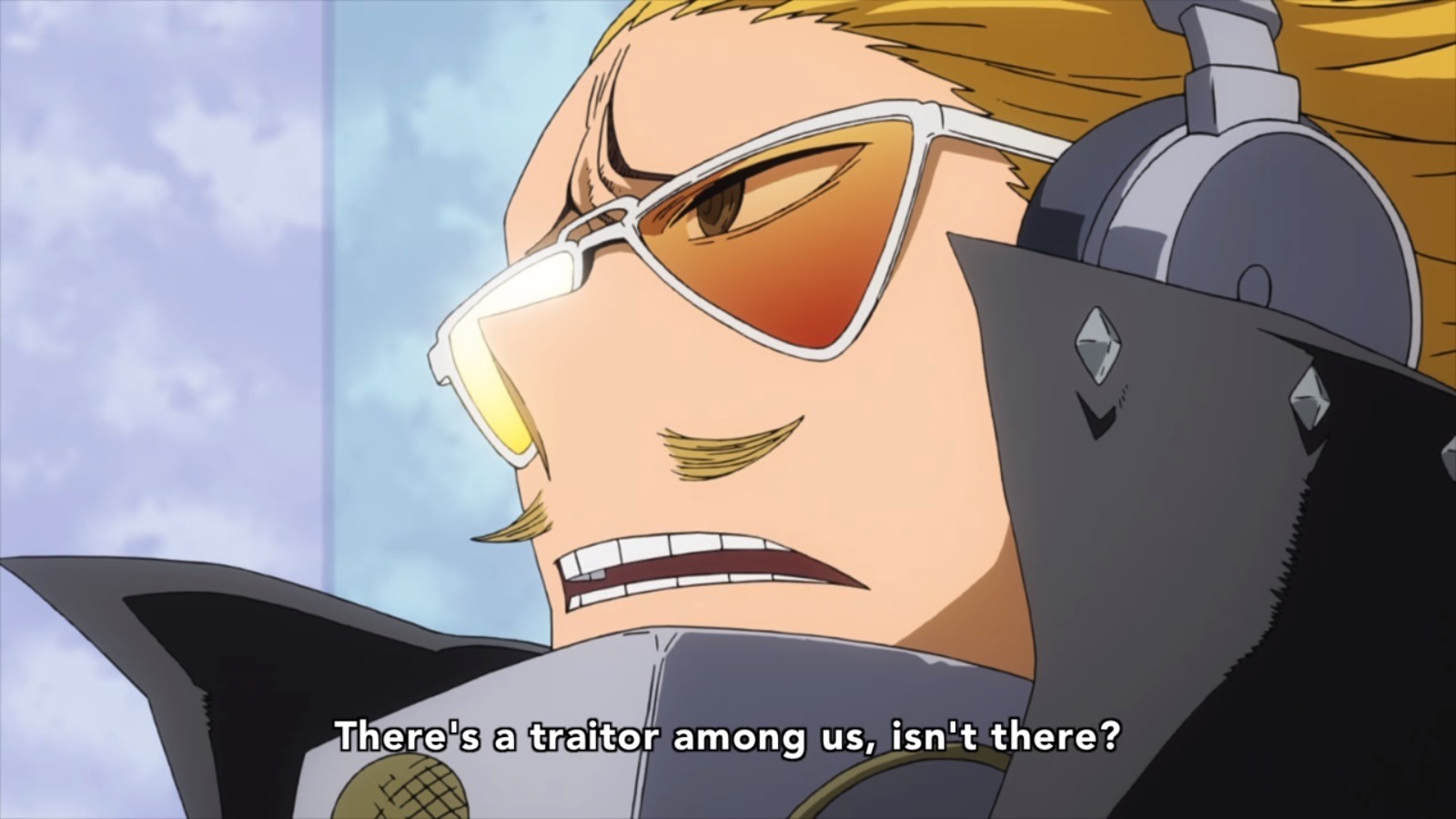 The heroes are on the defensive most of the time in My Hero Academia, struggling against a far better prepared adversary whose zeal matches their own. That dynamic makes it believable when an episode like “What A Twist!” occurs. The threat of the League of Villains is real, because they often win in the long run. This time they’ve done the unthinkable: kidnapped a UA student, seriously wounded several more, and caused society to openly question the effectiveness of the number one hero training high school. MHA has upped the ante by having the villains win on all fronts.

The chaos and doubt the League of Villains causes even seeps into the heroes’ psyches themselves. Bakugo’s teachers and friends are left to consider their failure as their friends remain hospitalized. Even All Might, the greatest hero of all time, is thrown back into questioning his own usefulness. 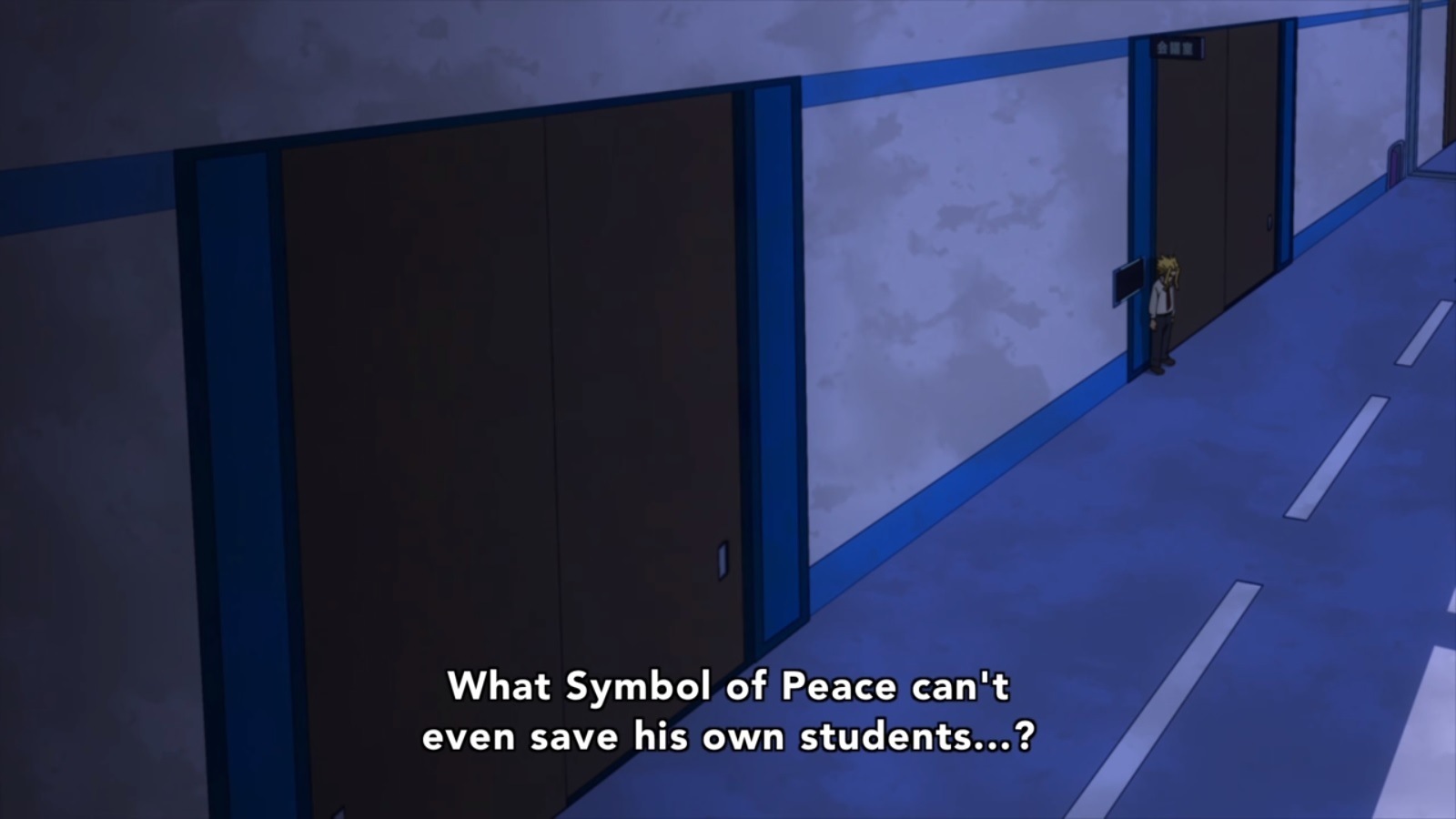 Meanwhile, Midoriya and his friends are fighting among themselves over the best way to help Bakugo. They are still students and cannot act without permission from their teachers. Yet that is exactly what Kirishima proposes as the episode draws to a close. Iida has learned the cost of being impudent with his powers during the Stain incident, but Todoroki has not. The rules of the superhero society are under attack from outside and within, with our future heroes deciding if they should ignore what they’ve been told. How will the superhero society survive both the League of Villains and heroes who don’t follow the rules?

Still, there is hope. Yaoyorozu’s quick thinking has given the heroes a chance to find the villain’s hideout, and All Might compliments her on her growth as a hero. Last week, I wondered if Aoyama would be given the chance to overcome his fear. He did, saving Tokoyami in the process. And despite his worsening injuries, All Might is ready to take the fight to the villains.

The heroes have lost this battle, but the war isn’t over. 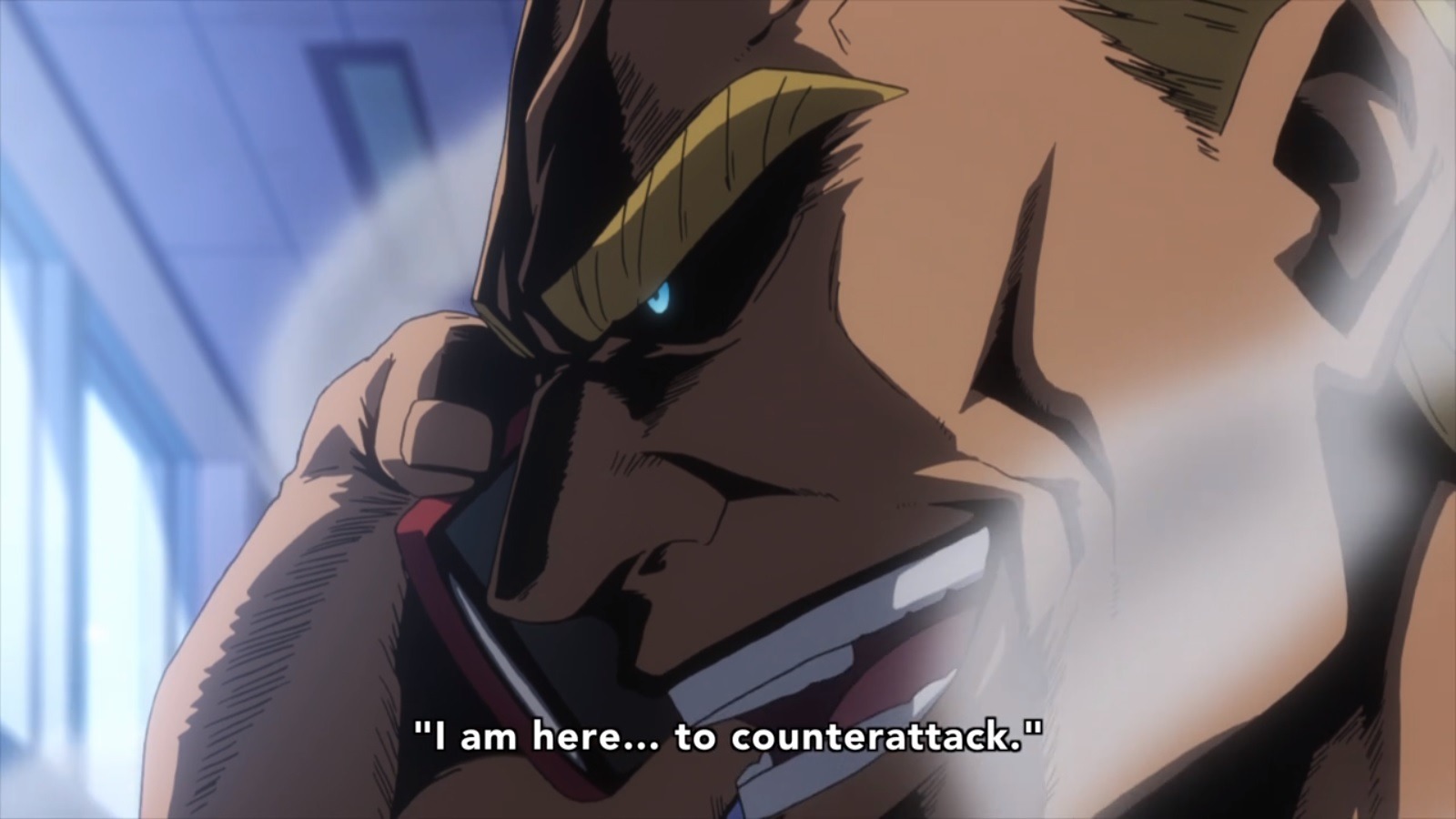