Naruto was a manga so full of characters that each had their own little nuances that made you love ’em or hate ’em. Now there are a few characters that get hate and deserve it for the most part, but there’s one that has been consistently hated on since the beginning. That character is Sakura Haruno, the only woman of the main trio. Sakura has been called useless, stupid, a waste of time, and everyone’s favorite word to use for her… a b****. Now I’m not here to tell you that Sakura is the best character, but I am here to tell you that she’s underrated and unappreciated for the things that she has done in the series. So without further ado, I bring to you, The Story of Sakura Haruno: Underrated and Unappreciated.

Now to start her story we have to go back to the beginning. Sakura Haruno was a little girl in the Leaf Village ninja academy with self-esteem issues and no confidence in herself. She was made fun of for her forehead which her classmates said was too big. She would always cover her forehead with her hair to save her from some of the bullying she would get. Then along comes Ino Yamanaka who gives Sakura a bow to put in her hair to bring the attention away from her forehead. The two would become best friends, and with Ino’s help Sakura gained a little confidence in herself and began to create her own personality.

Fast forward a little bit and Sakura is once again experiencing self-esteem problems. She feels like she’s living in Ino’s shadow and when she finds out that Ino also has a crush on Sasuke Uchiha she decided to end their friendship and become Ino’s rival. All of this stemming from her original self-esteem issues.

Fast forward even further to when the original Naruto series begins. Sakura still has a crush on Sasuke and gets put onto a team with him and Naruto. Naruto has a crush on her and she continuously shuns away any attempt he tries to make to be with her, or even to be friends. Naruto is shunned out of society and Sakura treats him like most of the village does, albeit with more psychical comedy. Sakura has an inner personality that she hides and an outer one that she allows people to see. Her inner thoughts are her insecurities that are released in a somewhat angrier way. Usually her inner personality would point out something that a character does and would say something along the lines of “WHO DOES SHE THINK SHE IS?” It was also used for comedic effect.

An important thing to note about Sakura is that she was just a normal girl. Well, as normal as a ninja girl could be. She had no inner powers, no clan jutsu, and wasn’t a Taijutsu master like Rock Lee. She was just a normal ninja, the Krillin of Naruto if you will. Sakura barely makes it through their first dangerous mission when her team goes against Zabuza and Haku. This is when the “useless” talk started. In this fight Naruto and Sasuke handle most of it while she is basically babysitting the person they’re supposed to be protecting because she was ordered to. She herself knows how weak she is compared to the rest of her team, but she doesn’t run away and stays with the person. She doesn’t do much fighting, but she never forgets her mission no matter what happened in the fight. She doesn’t cry or show any sadness or extreme fear until after the fight is over when she thought Sasuke was dead, which he wasn’t. Again, she has no special powers, she’s just a normal girl… ninja… ah yes, a Kunoichi.

This brings us to the Chunin exams which is where we really see her start to grow into the great Kunoichi she’d later become. The Forest of Death is where Sakura’s real story begins. So again she doesn’t really do much — she hides and lets Sasuke and Naruto show off. But when Naruto and Sasuke are incapacitated after a fight with Orochimaru and gets ambushed by a group of other ninjas, she panics. She has no one to help her, and her traps didn’t work on them. Sakura’s scared and alone until Rock Lee, the taijutsu master who has a crush on her, comes to help. Rock Lee fights all 3 ninjas but ultimately fails (mainly because he didn’t want to use his real powers or take off his weights, but that’s another story). Rock Lee is taken out which leaves Sakura on her own to fight them. One of them grabs her by the hair and tells her that she’s not a real ninja and that instead of training she focused on her looks.

Her whole life, Sakura has done everything in her power to try to keep her confidence up by any means necessary, which includes focusing on her hair. Sakura realizes that people are always saving her. She realizes that if she’s ever going to be a great ninja she has to fend for herself. All the years leading up to this would mean nothing if she dies here, so she uses her kunai and cuts her hair.

She then begins to fight for her life against all 3 of the ninjas and holds her own pretty well until help comes for her and Sasuke wakes up to defeat them. This was a pinnacle moment in her life. She realized that she didn’t care about her looks or her self-esteem or any of that. In that moment Sakura separated herself from how she used to be. In that moment she was among the best.

Throughout the chunin exam and the Ambush against the Leaf Village she shows courage and skill. Her fight against Ino was honest and brutal as a fight between people who used to be best friends should be. Fast forward a little to when Sasuke had gone missing. Sakura loves Sasuke for more than just his “coolness factor” and tells Naruto to bring him back. She’s crying and is basically begging for Naruto to rescue him and he accepts her request. Sakura then realizes that Naruto would always be there for her and even though he loves her, he would do anything as long as it makes her happy. Sakura finally, after all these years, realizes that she had a true group of friends around her, and through her sad tears, there was also happiness.

Now we’re in Shippuden (part 2 of Naruto after a two-and-a-half year time skip) and Sakura has become a fantastic medical ninja with the help of Lady Tsunade, and even learns how to build up her Chakra and gain super strength. Sakura went from not having any special talents other than being skilled with her chakra, to becoming a medical ninja and just about mastering Tsunade’s technique in 2 years. She was no longer worried about self-confidence, no longer worried about her usefulness. She made herself an essential part of the village.

During Shippuden, Sakura proves herself time and time again by defeating enemies and keeping up with all the other ninjas around her. She defeats Sasori, an Akatsuki member and a very powerful ninja in his own right. She had help from an old lady but she still defeated him and that’s all that matters.

And still, even with all of the things she has accomplished, she’s still tagged with “useless” label, although at least the “b****” part is typically gone by this point. Sakura is there with Naruto and Sasuke in the final fight. No longer in their shadows and right up there with them standing tall and proud. Naruto and Sasuke are basically “god-mode” when it comes to their powers at this point and Sakura feels like she belongs right there with them. With a smile she faces all of her haters, her own doubts, her insecurities and more importantly one of the powerful villains of the show and she feels right at home. 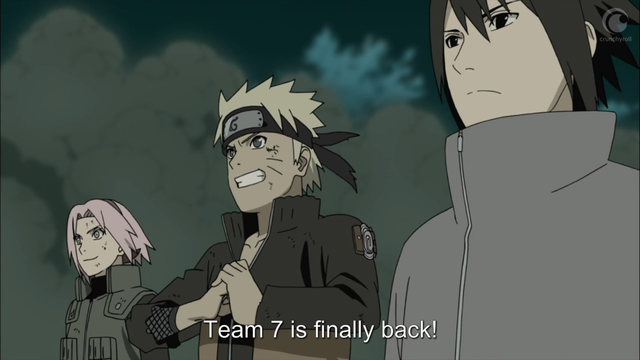 Sakura becomes an important character in the final battle, healing and saving lives as only she can do. You could almost say that without her the final war would have been lost with how much she contributes. Oh, and in addition to all of this… she gets her man in the end. They even have a daughter together. How cute, right?

The story of Sakura Haruno is a great one. She’s a slept on as a character, not only in terms of Naruto characters, but characters in general. I feel like readers didn’t try to understand her and just thought of her character as a typical girl character, or just tossed her up to bad writing. Sakura was underrated, and the things she contributed to the show were unappreciated. She was the most human of most of the characters: she felt weak, she felt useless, and she was bullied. She carried all of that with her until she decided it was time to let go of the past and focus on the future. And while Naruto might be the titular character, watching and reading the series from Sakura’s point of view might have been just as good a story.