Blackness, for many of us, is life; not a choice or even a matter of convenience, but simply life force that we channel in our daily battles. This year, we saw Blackness bursting from unexpected sources in unexpected situations. It was like witnessing a young shinoboi channel chakra on a visual level. The tailed beasts in Naruto and the young ninjas those beasts were sealed in are known as the jinchuriki, were some of the most powerful forces in the world, capable of game-changing power and destruction.

Naruto himself, having the nine-tailed fox sealed inside of him, often increased in power as more of the tails revealed himself. One tail of the nine-tailed fox was enough to worry about. By the time you got to 4 tails, Naruto could level a city and was no longer accountable for the actions that the enemy wrought. Such is Blackness (which would make Fox News the Akatsuki?). Bigots don’t want to be on the wrong side when the tails start showing.

J. Cole Leads A Slave Revolt In A Music Video (6 out of 9 Tails)

Bruhhh, it may not have been Public Enemy bombastic, but this is some of the Blackest shit to happen in an arena (rap) that is 98% Black. J even kept that shit a hunned and knew that his light-complected ass would be in the house during the “G.O.M.D.” video. This shit could be on mute and still be a classic off the gall alone.

Fam, I already gave you run down on how Bree “I got your scalp, racists!” Newsome is a super hero and should have her own comic book.

But let’s not forget that “Bout That Life Bree” shimmied up a 25-foot pole (points for athleticism) like Spider-Woman, removed the pride of the South, and then returned to the Earth while quoting scripture. I mean, what the hell did YOU do with your summer?

The aesthetic of this is Black as humanly possible. Period. Following the tragedy — excuse me, the terrorist act that was the slaying of nine beautiful Black people in a South Carolinian church, one of them being local congressman — President Barack Hussein Obama was invited to give the eulogy at the funeral. The Amazing Grace song is the headline, but Prez basically let at least 8 tails see the light if you listen to his whole speech.

It was basically a longer version of Andre 3000s awards speech when he said “the south got something to say.” Except by south, Prez meant all Black folks. And instead of referring to music, Prez was talking about the racists that walk among us.

I’ve written about John Boyega at length already, but that was before The Force Awakens dropped and before this becoming some of the best footage of the year:

That’s a six tail showing right there. Let me remind you that your boy just got Black Boy Fly on the Red Carpet for the Star Wars premiere. Boyega is basically the type of jinchuriki that walks around with his Beast showing and doesn’t give a good gotdamn who sees him like that.

We gonna skip past the part where White folks favorite joke when talking about this movie was, “I thought that band broke up a while ago!” despite the fact the previews were splashed around like crazy since it’s a Rocky spin-off. Hardy har, muthafucka. We also gonna skip past the fact that Michael B. Jordan was amazing in the role and it was shot beautifully by Ryan Coogler, and yet Sylvester Stallone was the only one to get a Golden Globe nomination (totally deserving for Stallone, by the way).

What we are gonna talk about is how this movie and everything surrounding it brought back the living embodiment of the term Blacktacular. This was excellence wrapped in melanin, picking out its ‘fro with a Black power fist pick. 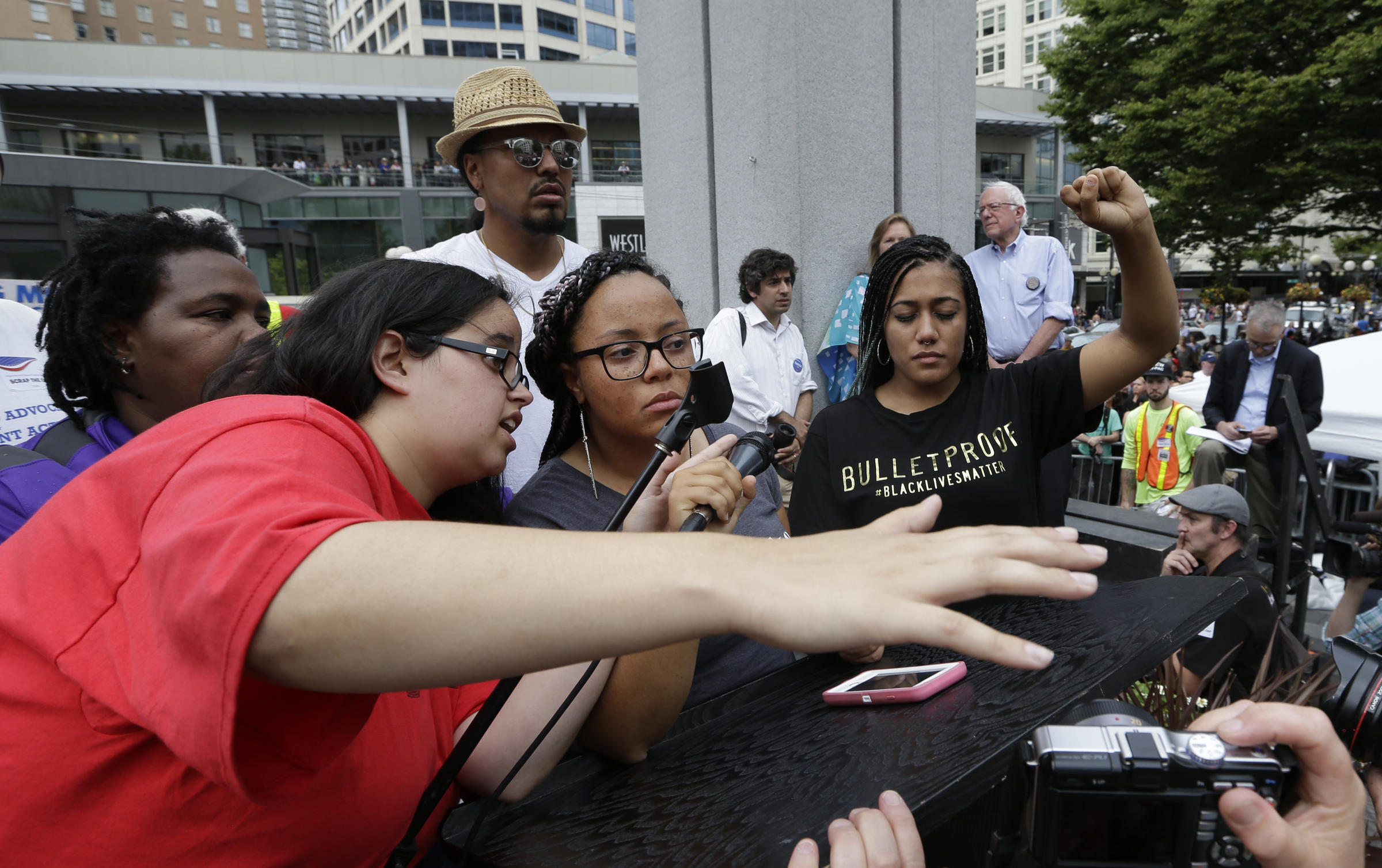 Okay. My very left, very progressive White brethren. I love y’all… I really do. Not as much as you love Bernie Sanders, but still, the love is real. I know y’all hated that Senator Sanders got pre-empted, pushed back, and flustered when all he wants to do is save our poor, poor country. And you know, Black folk, too. But regardless of how many of your friends repeat to each other that Bernie marched with Dr. King or how the official BLM chapter dismissed and distanced themselves from the two women that interrupted Sanders, there are quantifiable facts here. Sanders wasn’t talking about race before things started getting uncomfortable for him. He wasn’t bringing in special advisers to tackle the plight of Black people or now addressing the state-sanctioned violence against Black folks before.

So Marissa Johnson and Mara Jacqueline Willaford, I personally salute your unapologetic Blackness and pursuit of real accountability from well-meaning politicians. Since the summer, Sanders has been the most progressive candidate on race and contrary to the pandering from Clinton, the most earnest politician in the presidential race addressing real world institutional racism. So, all you cats feeling the Bern, you should be thankful to those sistas. They helped fix your candidate.

So here’s the real shit dundata. When I say that someone is poppin’ off about something, it’s because I’m in a public arena that doesn’t permit me to say what I really mean, which is, “Muthafuckas talk shit when they don’t know what the fuck they talkin’ about.” But, I ain’t never said that shit about Congress members at a press conference about one of the biggest terrorist attacks in recent memory. I need y’all to understand how Black this shit be. If I was eating Christmas dinner with the fam and casually said, “well if my cousin wanna pop off about something they don’t know about–”

–my cousin would rush up in the dining room like, “Yo, Cousin Will, I heard you were talkin’ that shit.” If I ain’t sayin’ that shit about the fam, then how the hell my President saying this shit about sitting Senators? The President’s Blackness been leaking all over the place at this point. He is turning into the pastor from Don’t Be A Menace where he’s giving less and less fucks as his time in office draws to a close.

Joe West On The Flash, Every Gotdamn Week (3 out of 9 Tails)

One of the actual real conflicts (not the fake ones where people debate how bad rape actually is because of celebrity stature involved) about the exposure of Bill Cosby is what my generation does with our memories of the Cosby Show, still the most influential TV show with a predominantly Black cast in our history. In that vein, Heathcliff Huxtable was the picture of a Black father that was smart, funny, impactful and most importantly caring for the well-being of his Black wife and Black children. This is before we knew Cosby was spiking women’s drinks or that he would basically spend his post-Cosby Show years telling Black people how terrible they were.

Different generation, different circumstance, different agency. But Officer Joe West on The Flash, played by Law & Order veteran Jesse Martin, isn’t just the best actor on a superhero show, he also plays the best father on TV. Period. I don’t think it’s close. In the lore, Iris West was supposed to be the big impact for this show and The Flash surprised and delighted many when we heard they were casting Candice Patton, a Black woman for a historically White role. Casting her father, Joe West, was probably a byproduct of the former. But there’s no debate that Joe West has made the biggest impact on this show, and watching Martin kill it each week as a father to Iris, the Fastest Man alive, and now Wally West (!!!) is the gift of Blackness that keeps on giving.

I had a very simple reaction when the album cover of To Pimp a Butterfly was first released to the public: “Fuuuuuuck.” And then… “can he do that?” And then, “why the hell hasn’t someone else done this before?” Well, when the album dropped after that, we learned that the content wasn’t far from the cover as Kendrick gave us the most unapologetically Black rap album in a long time. The album isn’t filled with bangers and soliloquies designed to blow out your speakers. It’s basically a rap version of a jazz album with the theme of “Grandma’s Hands” running in the background. Playing King Kunta in a room full of conservatives is like Naruto giving you 400 Shadow Clones in a room full of Akatsuki warriors because that’s his ninja way.

Yo. YO. Telling an engaging story, 100% on Twitter (Black Twitter no doubt!) about Hooters restaurant, trickin’, the trap game, kidnapping, back pages (which I didn’t even know existed before this) and straight murder was the Blackest shit that happened in 2015. Hoe trips, yo?! I don’t care, I don’t care, I don’t fuckin’ care. When’s the last time you read or saw something for the second time and you were pissed off that you already knew what was coming? I was sending this shit to people and waiting by my phone for notifications, checkin’ in with them like “yo, did you get to the part where Z went to the hotel yet?”

These characters had more depth and development to them than most big budget movies get. Zola’s story became the new Wire, where you turned your face up at a muthafucka if you discovered that someone hadn’t read it yet. Not only are there moments where Zola’s story dips into 9 tail territory, I actually want to hear Zola recap some Naruto episodes when the filler get too thick. That shit gotta be better than the Icha Icha shit that Jiraiya be writing.

What Blacker than Black moments are missing from the list? Drop your favorites in comments.