Oh, I love the fantasy genre and I also love how I can get my fix of fantastic comics projects via Kickstarter that cater to this. This particular KS campaign caught my eye and I totally wanted to share the news about it. Galahad and the Far Off Horizon is a comics anthology with five short stories written by Hansel Moreno. The artwork is handled not by one, or two artists but five creatives in total with with tales of “Powerful spirits, living armor & clever witches”.

I had a quick chat with the writer Hansel Moreno, whom I’ve been following for some time now on Twitter about this new endeavor he’s involved in.

Black Nerd Problems: I’m just very impressed and very excited of what I’ve read so far of the anthology: dare I ask where do you go to get inspired to pen all of this? Or what is the process in which you find yourself inspired? How does this universe and world building come about?

Hansel Moreno: I had to pull up my notes and emails to Julian (@magicalseaside) to see what started this story. I was in the middle of my last kickstarter and had experience with a few mini comics but I really wanted to tell a story longer than eight or ten pages, wasn’t only narrated and had external and internal conflicts, something that would really push me to grow as a writer.

I came up with the idea of a world that had magic but it wasn’t an everyday thing for everyone. I had a clear idea of the conflict: A fey plant that could poison the world and a magical suit of armor (Galahad) trying to solve the problem.

I wanted to have the reader understand that Galahad had a conscience/heart so I decided to include his creation and his meeting with Bynne (the hedgewitch who accompanies him in The Garden of Galahad). In this setting an elderly farmer/retired knight, Lance, decides to use the limited knowledge to bring his old suit of armor to life so he can have some help around the farm. As Lance teaches Galahad how to care for plants we get to see the tender and caring side of a huge hollow and voiceless suit of armor. From that point the story spiraled out into the story you’ve read where Galahad and Brynne embark in an adventure to return the fey plant back to where it belongs.

BNP: Personally, I think collaborations are important between artists and with this project you’ve joined again by two artists that you’ve previously worked with before on other comics–Chan Chau and Julian Adkins. What was it like jumping back into the saddle to work on this like with familiar talent, with friends?

HM: Chan and Julian are extremely talented creators, I am so thankful to have had the opportunity to work with both of them. Chan colored the pages previously illustrated for The Witches Laugh so we really haven’t had a chance to collaborate a second time. I cannot wait to work with them again on something new. I have an idea already but I’ve been working on the anthology and need time to raise a budget for a new project.

Julian and I had previously worked on a one page short (Homecoming) for a facebook group that had one week/one page comic challenge. After that we tried to do a short in eight pages but the story was just too complex to tell in that length and we abandoned that idea for now, but hope to revisit that story at some point. By the time we started working on The Garden of Galahad we were very much in sync. This is pretty much my opinion, you’d have to reach out to Julian for his thoughts.

With character designs, plot points and layouts there were little to no revisions. I had a thought and Julian was able to visualize and bring our ideas to life almost instantly. Going through the “Making of” pdf that John (Julian’s partner at stilleatingoranges.tumblr.com) is putting together is almost like a photo album of the last two years of our lives. I think we all can’t wait to see this book in print and take a nice break from the hustle and bustle but honestly I cannot wait to make something new together with Julian.

BNP: While it’s true you’re still fairly new to comics with only a few years under your belt, I wouldn’t chalk up your inexperience as reason to avoid your work. If anything I’m moreso excited to see a newer writer flex and show folks what they can do. For all those who are unfamiliar with you and your work–this Kickstarter Campaign will be their gateway comics project to you: what would you like them to walk away with after supporting this project and reading this anthology?

HM: I like the idea of a simple story: Galahad needs to save the village. At face value that’s what The Garden of Galahad can be interpreted as but I hope people can sense some of the optimism in these stories. The value of friendship, determination, ingenuity and perseverance in the face of almost insurmountable odds. It’s a collection of magical and fantastic adventures but there are themes that can, hopefully, help people in real life.

Here's a process GIF of a page from Galahad and the Far-Off Horizon, which is in its final week on Kickstarter! https://t.co/SnRgT2c6Ty pic.twitter.com/PqJSWUSs10 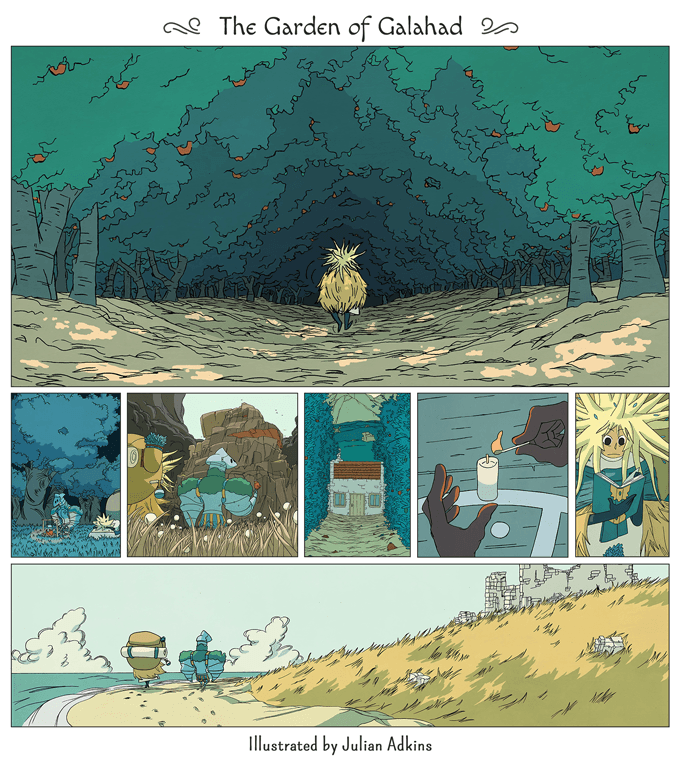 I had a chance to review one story in particular titled, The Garden of Galahad illustrated by Julian Adkins with assistance from John Adkins. At 49 pages long, it is the longest short in the entire book and it is also the story that serves to introduce the readers to the universe in which all the other stories additionally take place. I’m not sure what exactly I was expecting but I would myself blown away–just in awe. It is a lovingly crafted tale of enchanted objects and well meaning witches, of dedication and wanting to right a wrong. It is a profound piece of work standalone: uniquely illustrated and colored with panels that feature landscapes that capture the eye. At the end of those 49 pages I had not a dry eye and a new appreciation for storytelling via the art form and median of comics. If this was the main dish, the side dishes, other stories, if you will must be complete the experience and make this a project worth backing.

This is a project with many hands contributing as there aren’t are the artsts and the writer, Ha Mo on board. Everything down to the last detail was been and carefully crafted by a talented crew:

I can’t forget Julian Adkins’s talents on the gorgeous wrap around cover and the eye-catching end papers by Emily Osborne.

The other stories in the anthology will take place in the same universe that the first story, The Garden of Galahad introduced. These stories will further flesh out what we know about this place and give us more unique characters and much more great art to compliment what writer Moreno has penned. The artists on deck include: 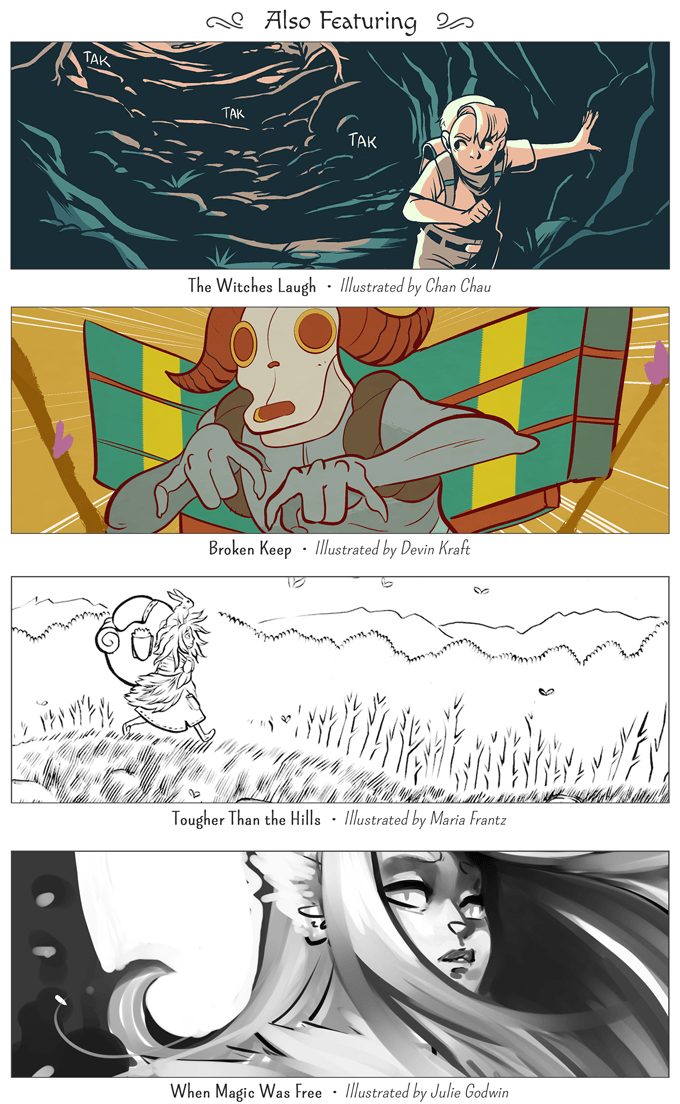 This whole endeavor looks like a real treat. Fans of the indie/smaller press comics circles will love this one for sure. Check out this project’s Kickstarter campaign now in its last week as it is a nearly to it’s goal and on its way to awesome stretch goals from other talented creatives. here.