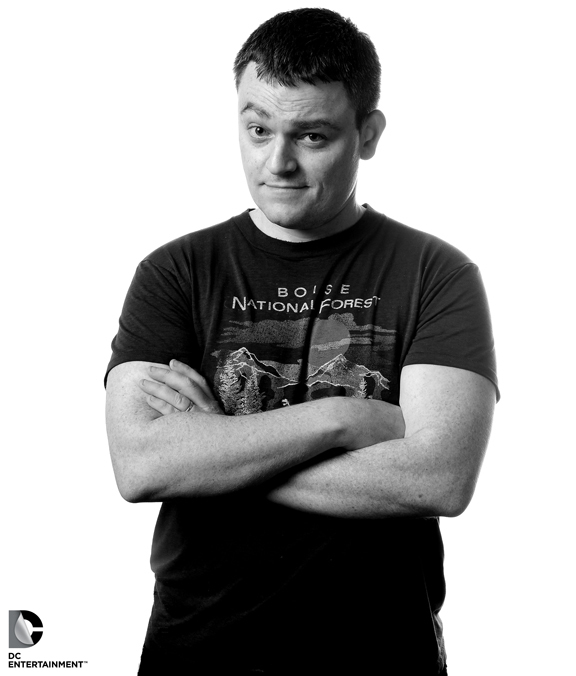 I was lucky enough to briefly sit down with Scott Snyder on behalf of BNP and ask him about all the interesting things he’s doing with Justice League. It was just a quick five-minute interview, but Scott gave me more than I could have hoped for in the short time we had.

Morgan: Your Justice League has a pretty diverse cast. Why did you choose this lineup of characters?

Scott Snyder: The thing that really was the driving force for me was sort of the emotional tapestry of it all. I wanted a character that would be a great entry point. I knew what Grant (Morrisonn) was doing with Hal and where the role would be for Hal at that point so I wanted to bring in John Stewart because to me, that combination of being somebody that has tremendous baggage because of what happened in Cosmic Odyssey and Xanshi dying, you know, who else has been responsible for the death of a planet? There’s so much emotional richness there, and sadness in a character that I want to bring in to remember his heroism in ways that he hasn’t seen in a while. So that’s why I picked a character like him. And Kendra, who is a new character (on the team) as well.

I wanted a character who essentially suddenly doesn’t understand her own mythology anymore. And as many lives as she’s had, she’s a complete mystery to herself. She starts to realize that maybe there’s a design to the lives that she’s been woven through. Maybe there’s a reason these lives happened. And Martian Manhunter, the third character that’s been away from the book that I’m bringing back. To me, he’s such a perfect Chairman because, in this particular moment, he can understand everybody’s thoughts and feelings, and I get to write all those through him, and yet he’s somebody who is so private about his own feelings. The big lesson of the first arc is that he needs to be able to show them what he’s most afraid of as well.

So these three characters, these kind of new additions that make it a little more diverse, just in terms of the newness of the book and all of that stuff too, it really came from a place of what emotional conflicts are gonna work best as singular characters and also with each other. So Martian Manhunter and Kendra have a relationship, a friendship that really delves into some of those issues, John Stewart and Flash become really close. Superman & Batman are kinda my two guys for comic relief and deep heart, all that stuff. And Wonder Woman & Aquaman have a friendship that starts to explore “What do you do when magic and divinity starts to fail?”

Morgan: The omniscient narration is one of my favorite parts of the book. Tell me a little bit about what inspired you to use it, because I feel like you don’t see it too often in comics. At least not recently.

Scott: Thank you! I’m so glad you brought that up, honestly. That was a huge source of anxiety for me at first. I went back and I read a lot of my favorite comics. Like stuff by Len Wein, Jim Starlin’s Infinity Gauntlet. And I love the grandeur! And the majesty of that omniscient narration that’s just like “Somewhere in deep cold space, a mystery unfolds.” But people started to think, I think, that it was spoon feeding, or it was corny or whatever. But when I started looking at it, I was like no, it adds a sense of scope and it adds a sense of, you know, this epic tale. So I wanted to bring it in and I love it! It’s my favorite device.

In the next issue, I’m starting to get to use it for fun. Luthor is piloting this thing through Superman’s brain and it’s this big moment of drama, and he’s like looking up and the narration goes “And he looked up into the heart of the multiverse, and suddenly, something looked back!” And then it’s a close up of Batman and it goes “Something very pissed off.” And I get to use the narration even for comic relief at this point. I’m learning that it’s nimble and what I want people to get from this book, honestly, is embedded in the use of that narration. I want it to feel magisterial and grand, but I also want it to feel fun and inclusive. I want you to feel like the Hall of Justice doors are open to you. Your favorite villains are in the Legion of Doom, your favorite heroes are over here. And they are arguing over something that’s about this moment in time.

Like right now we’re all going into our own camps, whatever political beliefs we have, I feel like we’re getting farther and farther apart. And the challenges we’re facing, there’s hardly any conversation across different camps. And Luthor is like: Exactly! Great! Civilization has been 2,000 years of derailment. We wanna go back to our biology, our DNA. We are villainous and I know because I’ve seen the future. And Martian Manhunter and the Justice League are like, no, we’re better than ourselves. Justice itself is a concept, it doesn’t exist in the natural world. We need to be better and reach across these divides and try and save the multiverse from totally crashing and burning by being self-sacrificing. So they’re locked in this struggle against one another and that narration to me, it’s all one piece. The tone, the crazy packed to the brim mysteries and all of that.

I want you to open this book and feel like this is everything about comics in one place that I enjoy and scares me and—it’s my opus, dude. I know it sounds really hokey, but I mean it. I’m writing this like if I never wrote another superhero comic afterward, I could leave this one on the table and be like you know, that was incredible.

Justice League is released bi-monthly, so hop on that if you aren’t already reading. In a few years, I think people are gonna look back at this run the way we look at Snyder’s Batman now.

See our SDCC coverage over on twitter via the #BNPvisitsSDCC tag!