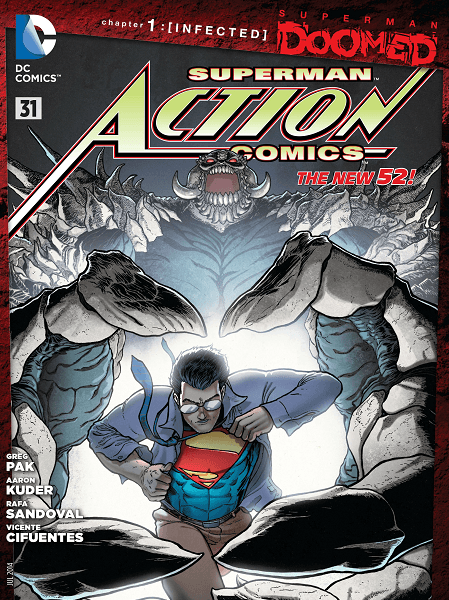 Pak and company continue in the aftermath of Superman basically sawing Doomsday in half to stop him from destroying the world where Smallville is ground zero. The bulk of the issue deals with Superman dealing with the damaged done to him during the fight with Doomsday and the physical and emotional changes he is enduring because of it. I was surprised that there wasn’t more weight giving to Superman’s decision to kill Doomsday since it’s always been a point of contention with him, but I was thankful it wasn’t explored as much because frankly: that’s become a bit tired. Instead what we see are the interactions, near and far with Superman and how everyone chooses to help or comfort him.

Of course, Superman being vulnerable in more ways the one means that Senator Lane has his blood up to take advantage of the situation. His meet up with Steel seems to be an ominous one, as Lane might actually have a point of keeping tabs on Superman with his dissolving mind state.

It’s an interesting issue as it handles the fallout for everyone, not just Superman, but further illustrates that they are just bystanders to whatever he decides to do.