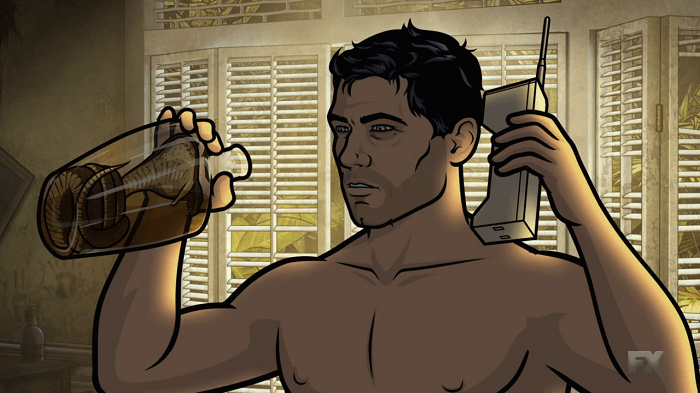 Off the top, from the tippy-top, this week’s Archer had one of the best opening sequences it’s ever had. Sterling went through his whole morning routine in the break room by using Pam’s crying vessel as an accessory was just brilliant. The rest of the episode didn’t quite reach THAT height, but all in all, this was a pretty good episode. Pam is an emotional wreck because her sister is getting married. And because she wasn’t chosen as a Maid of Honor. And because the woman that was chosen ahead of her once gave a blowjob to a guy she liked back in high school behind a grain elevator. Yeah, Pam is going through it fam. Hate it had to be her. Sterling, who isn’t always a terrible guy, not 100% of the time anyway, agrees to go with Pam to the wedding as her date (since that would be better than nothing, and nothing is worse than going with a black guy…). On their way through the airport, Cyborg Barry (who was on his way to kill Sterling in New York City (you only have to say New York)) overhears them on their way to Chicago and changes his travel plans. This sets up another Archer vs Barry scenario instead of the wedding.

Overall the jokes are mostly good, some falling flat or just being avenues for better ones. Pam’s sister Edie is…good lawd. Like, I don’t know if I can articulate how horrible a person she is and this is on ARCHER mind you. She goes so hard in the paint on the insults, I could barely keep up. She’s definitely like the vicious version of Pam, with all the vulgarity and directness. She might be the Thanos of put downs. Allison Tolman rocks the voice talent for her (of Fargo, the TV show fame) and just kills it. I hope she makes more appearances.

Honestly, I would’ve like do see a conflict in this episode minus Barry’s involvement. That story is kind of recycled and typically ends the same way, but Archer has done great with the small town story, like “Bloody Ferlin” when Ray went home to defend his brother. Edie gets plenty of time, but I would’ve like to see her in her element at the wedding, let alone the rest of Pam’s family.

This was a pretty weak episode for the B squad too. With Sterling disappearing to rural Wisconsin with Pam, Lana is trying to get someone to babysit AJ while she gets her Rambo training on for the weekend. There’s a few funny one off jokes (like Ray pulling the Curb Your Enthusiasm bit on the elevator). Everything else was pretty easy to forget (for instance, I have forgotten most of those already). Except this one:

Cyril obviously has plans of trying to get back with Lana, which, bruh…can Lana date someone outside of the office? I can’t…I just can’t do this again.

A decent episode with Pam and Edie as the centerpiece, but they really could’ve done more if they didn’t have to adhere to more Cyborg Barry drama.