And you say Star City! This week we start off with a gang of thugs making a drug deal. After the drop, a SWAT team rolls through and a shootout goes down. They demolish the criminals. Seconds after SWAT handles the perps, SCPD rolls through off the strength of a tip from their Criminal Investigator. The SWAT team (led by True Blood‘s Rutina Wesley) turns rogue and murders the Star City officers.

Let me upgrade ya…

The writers seem to have remembered that Oliver Queen recently decided to run for mayor. He reveals to his team that he decided to run and they all start to go IN on his liiiife. Felicity throws him a girlfriend bone and tells them that Palmer Technologies has decided to fund the start of the campaign. But the team members quickly point out that he has no idea what it takes to be a politician, so he needs to get his shit straight.

They decide to use Blood’s old office as their campaign headquarters. But they don’t just take his campaign office. Oh no no no! They take his super secret lair, throw some D’s on it, and upgrade it on some archery-customized-next-level S.T.A.R. Labs shit. Cisco comes through and helps Felicity trick out the new pad.

Felicity finds out some cops were murdered and the team is on it. As they investigate, Felicity goes to work. She and Black Cisco, Curtis Holt, are at Palmer Tech figuring out how she’s getting these crazy code texts. The Code is 2 years old and coming from there in Ray’s lab. I mean, do I even need to say it? He’ll be back. As sure as we were with Sara, he’ll be back.

New Crooks on the Block

Felicity teleports back to the new ArrowLair. Together they all figure out where the SWAT murderers are holed up and go snooping. They don’t find anyone, but the gear they find that says SCPD indicates that they are definitely dealing with some traitor cops.

Laurel out here getting more people to hate her. This time it’s her dad. She bringing this dude down to the boiler room dungeon where they have Sara chained up in. Lance is like, nah, that is NOT my daughter. Laurel provides a few words of encouragement and thinks she’s making a breakthrough with her dad believing Sara might still be in there… then Sara chokes her out with a chain! Safe to say, he’s good on this. Team Arrow is trying to find out who these killer cops could be. They know they’ve been taking down drug dealers then pocketing the goods so they decide to use Thea’s old connect to set up a drug deal in order to bait the bad guys.

Ollie pays the shaken Lance a visit, and informs him that other cops are the culprits. Lance is pissed he has crooks on his payroll… yes, even though he’s a dirty scoundrel himself. So Oliver tells Lance that the drugs for the ambush deal are in this specific warehouse and to leak the info so they take the bait. Thea and Dig are out on their dopeboy flow when the crooked cops show up and Team Arrow springs into action. Arrow and company think they got the jump on the cops but they’re much more formidable than expected. They’re out here blocking arrows, shooting capture nets, and disabling the Canary Cry like it’s nothin’. An eventual stalemate occurs and the cops hightail it out of there. But not before Captain Lance gets a good look at the dark-skinned head of the pack.

Back at the new lair, they discuss what the hell happened with all this fancy weaponry the bad guys were whipping out left and right. Lance reveals he might have re-instated the anti-vigilante task force. He gets a few death stares. The killer cops know Lance recognized them and are debating whether they should take him out. The head boss lady, who we soon find out is named Liza Warner, lets them known her vote is the only one that counts.

She has a plan, and it involves Lance.

Felicity and Curtis are ready to decipher the hacking mystery when Felicity reveals the real reason she isn’t going full-fledged inspector is because she doesn’t want to hear the last thing Ray (her ex-boo) said before his death. This is the same girl who immediately gets smiley every time she walks into the lair as Oliver is fulfilling the CW no-shirt quota, busting out dem salmon ladders. She need to stop frontin’.

Felicity, we don’t believe you, you need more people!

Lance goes out to meet up with Damien Darhk in order to ask for his advice about Sara. Darhk keeps it 8 more than 92 and tells him that Sara’s soul no longer resides in that body. His best bet is to end her misery.

Back at ArrowLair, Felicity discovers who Warner really is and starts hacking the city’s cameras to find her. What they find is unexpected. Lance speaking with Darhk.

Lance is in the dungeon, breaking down something severe. He’s about to off his daughter’s spiritless body when Laurel shows up to convince him otherwise. As Lance leaves the premises, he gets attacked by Warner and the boys. Laurel takes down one or two of them. Probably one. They escape and bring Lance to the SCPD Contraband Disposal Facility. Lance tries to get gangsta, and Warner lets him know they very much plan to use his Captain’s access to get in. He tries to act like he still has some power then gets bodied into letting them in.

Team Arrow must have an insane amount of alerts for their squad and affiliate because Felicity finds out that Lance’s access pass was used to get in the disposal facility and they suit up.

Canary shows up first and demolishes dude who took out her Canary Cry.

It was pretty dope. Thea pulls up and bow punches some dude to sleep, then Oliver takes down Warner. Dig gets some action, then Ollie saves Lance. Two minutes later, Lance returns the favor as Oliver gets a knife to the back by a somehow freed Warner. He sweet talks her into remembering that she’s not a criminal and in fact, a good cop in a terrible position, while Star City crumbles around them. She lets Mr. Queen go and is ready to have her rights read to her.

Post-battle, Ollie is uber thankful for Lance’s surprisingly great way with words. Lance is ready to turn in his badge and admit to being a crooked cop when Ollie tells him that he’s the main reason he decided to run for mayor and is still needed. 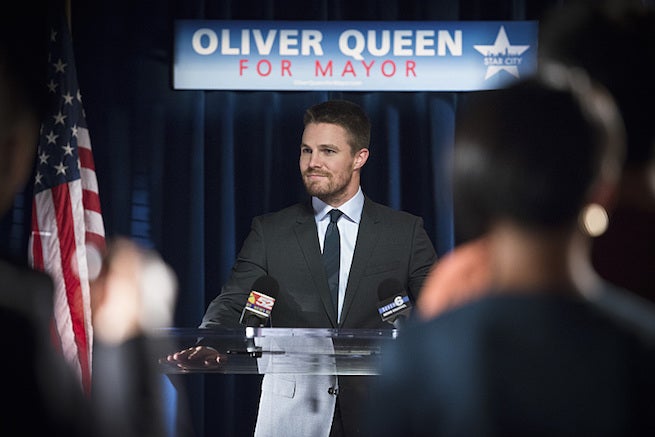 Campaign headquarters has a hell of a lot of interns. Thea got all her club followers to sign up to help the campaign, then hands Oliver his candidacy speech. And boy does that man make a speech! He preaches hope, overcoming challenges, trust and uniting everyone in order to bring the city back to its former glory.

Someone (maybe Darhk?) seems to have gotten some sort of vase of magical evil. I wonder what this will entail.

Laurel heads down to feed and water her pet demon when she finds out that Sara has escaped. Dun dun dun! 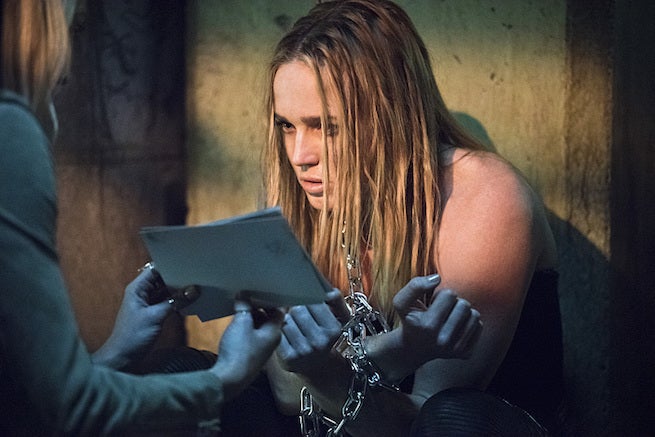 Flashback: Oliver is helping the woman he saved stay alive. He goes back to the camp only to be forced to show the boss, Conklin, the dead body. He brings Conklin to the woman’s magically dead appearing body and turns around. Right before he leaves, Ollie shifts her jaw and she wakes up. On Conklin’s walk home, he finds Mr. Queen’s mission communication device. Flashback battle in the works!