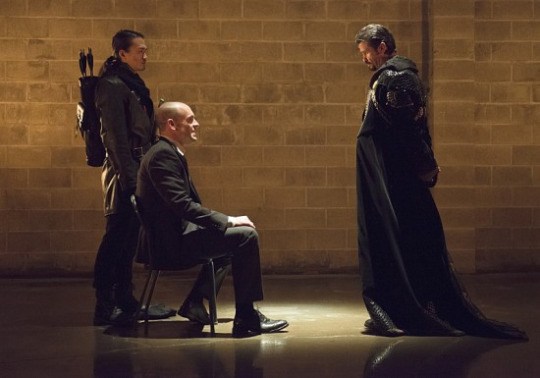 Man listen, Maseo out here being a straight up asshole. He done went and killed the May of Starling City and he took a shot at Felicity as well. Yo Laurel was in that office too, man.

Maseo: Ray? Ehh, don’t know you like that. Captain Lance? Ehhh. Haircut is doing you more damage than death could. Laurel…. hmm… no, I want the viewers to suffer. Felicity… hate it had to be you but that Olicity / Ralicity ship bout to SINK!

He let that shit fly and Ray C.I.A.’d himself in front of the attack for the save. I done told y’all they needed to get these Bow permits under heavier surveillance, now look what’s happening. Captain Lance is on his “fuck all that happy-to-be-here shit that they want me on” and ordering a complete man hunt for the Arrow. Laurel can’t talk no sense up in him. Thea and Roy were up in bed chilling when they saw the May assassination report on TV. They been in bed for a whole episode. Yo, y’all was getting it on that long?

Back at the Quiver they trying to figure out their next move to capture the impersonator. Ollie knows it’s Maseo, so he gotta suck it up and ask Nyssa for help. You know damn well Nyssa wasn’t bout helping his ass for shit since her father wants Oliver to whitewash the throne. Oliver hits her with that “What would Sarah want” GUILT TRIIIIIIP. She later shows up to the hideout and gives them the location where Maseo is hanging out. Then she proceeds to tell them she is not about that “rolling up on the fucking league of assassins life….payce”.

Meanwhile Ray up in the hospital. That arrow he took made a blood clot in his brain. His body so weak right now that surgery would kill him, but if they wait then the brain clot might kill him. Ray’s like, “You know I got tiny nanites. I wanted to call them microbots but you know copyrights and shit. Anyway, the tiny machines could go up in my head and dead that clot for me no problem.” The doctor was like, “Yeah that’s great and all but we don’t do no experimental shit in this hospital sooooooooo….. let’s just see what happens if we wait it out.” Felicity’s mom shows up to support her daughter and give her a high-five for finally nailing down a boyfriend.

Team Arrow arrives at the location Nyssa gave them. Diggle is watching from afar via sniper rifle wishing a league of assassins would try something.

[divider type=”space_thin”]
The party looking mad weak until Diggle tells the team ayebody is on the roof. Ollie comes out shooting immediately. Maseo caught his shit and was like, “Kill everybody.” Not sure how you supposed to kill dude when ya want him to be the new leader but whatever. How Roy come out the gate and shut like two dudes down with bows? Yo everybody was fighting on the roof and it felt like a 90’s -D scroller beat’em up. I’m talking Double Dragon /Streets of Rage / Final Fight boss battlescene on top of the roof. Right after the elevator fight scene. Y’all SNES / Arcade folk know what I’m talking about.

[divider type=”space_thin”]
Oliver gets the drop on Maseo and Ra’s Al Ghul comes out clapping his hands sayin, “Whooooo now that was dope. He sweep-kicked you so you swept him with ya bow. That was nice… sooo take my place now? Come awwwwwwn do it guy. Come aaaaaaaawn.” Ra’s tells him he will either die or be locked in a cage — oh, not by him but by the police who should be showing up any time now. Ollie sees them Fox 5 helicopters out and DUCKS. Yo him, Roy and Laurel jump off the building. They shoot grappling arrows and Oliver catches her ass. I will give Laurel some credit, cause me? Nope. I woulda took all 85 flights of stairs down. Fuck that noise.

The police is after Team Arrow like it is a cut scene from Grand Theft Auto, yo. Oliver ducking right, Laurel and Roy running through the warehouse. Roy has to hit some dudes with flesh wounds to get away. Captain Lance has Laurel at gunpoint till Nyssa steps in. Diggle has to bring the whip round back for Ollie to hop in. My man unloading explosive arrows on the police and just raising the property damage. Shit was straight hectic man.

Back at the hospital Felicity’s mom was pulling all the G-shit. She said, “Aye…if those tiny whatever robots can save ya man’s life, you better stick them shits in him. Fuck, this waiting around shit take the chance. Roll that …1-sided-die? I forget what board games you play. Just do it.” Moms is so fucking with it. She distracts the doctor while Felicity tells Ray this shit bout to go down. It all worked out too, well…

Felicity saves his life cause she so ride-or-die. Ray expresses that he loves her and she freezes up like someone cast a Freeze spell in an turn-based strategy game about Middle Earth. She does the “Wow, that’s….yeah….mmm hmm that is that… Lawwwwwwwwwwwwwd. You want ice cream? Lemme get you some socks…ice cream…I’ma..yeah.” She tells her mom and again her mom comes through and tells her the real about how she loved Oliver and this man loves her. Sheeeeeeeeeeeeeeeeeeeeeeeeeeeeeeeeeeeeeeeeeiit, you better choose the winner girl.

Back at the precinct, Maseo done knocked out Lance and dragged him back to see Ra’s. Yo man, Ra’s out here being an ass about shit now. You know damn well why he got Captain Lance there. My man got Lance talkin’ bout “Yo…. you ain’t goin’ believe this shit… *looks over shoulder* but ya wanna know who the Arrow really is? *looks over Lance’s shoulder*”

“
Ra’s done snitched on Ollie about Lian Yu. His time with Sarah. Every. God. Damn. Thang. Y’all. Come on Ra’s this shit just getting fucking low and grimey now. Laurel tries to see her Dad again to talk some sense but he isn’t having it. He straight up said he knew that Ollie was the Arrow. She tries to call him but it is too damn late, Ollie already back at the club ducking out for his life. He went to Diggle talkin bout “I got nowhere else to go.” Yeah that’s what happens when you fucking broke, Oliver. The whole team comes over and sees Captain Lance talking ALL THE SLANDER on Oliver being the Arrow. Daaaaaaaaaaaaaaaaaaaaaaaaaaaaaaaaaaamn, SNITCHING IS RUNNING RAMPANT THIS SEASON. Against the team’s wishes Oliver heads in to the precinct. The police draw guns on him so fast that a couple actually fly at him straight from the holster. The team got to see him in there and they are like, “What the fuck is this mess man?” Ollie was on his “the truth will set me free” shit (we see in a flashback him telling Shado’s sister (May) what happened to her and her father). The team looking at him like, “Bruh. There is no way in fuck it will.”

Roy is not about to let his hero go out like that man, he grills the team that something has to be done no matter the cost. Meanwhile Captain Lance talking aaaaaaaaaaaaaaaaaaaaaaaaaaaaaaaaaaaaaalll the shit to Oliver in the back of the swat van heading to Blackgate prison. Talkin bout some “You ain’t ever love this city. Oh you supposed to save people? How come ya mom’s dead, Tommy dead, and Sarah dead then? ….You ain’t a vigilante you just a fuckboy villain at best.” Ollie was up the river until this happened.

That your plan Roy?…Word? See you doing the most right now. That look on Ollie face isn’t appreciation, he lookin’ at Roy like, “You totally tore my outfit man! And shit, how many cats going to wear my freaking costume man?!!?!?”