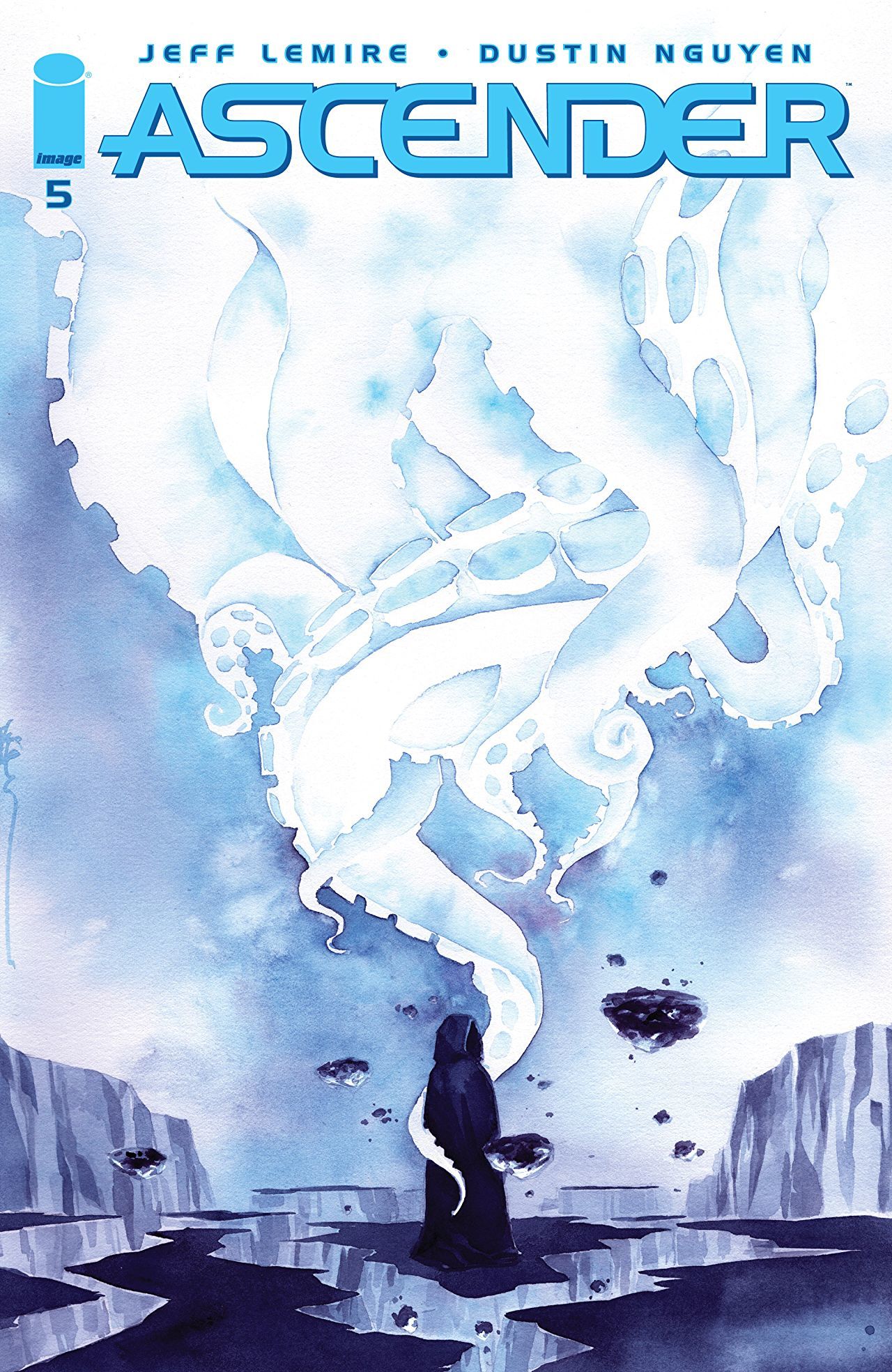 Ascender continues it’s less is more approach as Lemire and Nguyen reintroduce us to some characters of from the past while subverting our expectations for what’s to come in the series.

I’ve said this before, but Jeff Lemire really knows how to write comics well. He knows what needs to be said and what you need to see. Reading his comics never feel clunky, and they always let the artist shine with more room to tell the story visually. It’s gotta be incredibly difficult balancing refraining from writing too much and leaving so much space for the reader to fill in. I can understand how this might be frustrating in a world where a comic costs $4. Ascender is always a rather quick read. But I’d rather have a quick read that values a consistent formula for storytelling than a 5,000 word 22-page comic that fills each panel with unnecessary dialogue. Plus, like I said, this approach really allows Nguyen to take the driver’s seat and tell the story more visually.

This issue catches us up to what Captain Tesla’s been up to over the past few years and let me tell you…it doesn’t look like much. She seems to be a shell of her former self who buries her problems at the bottom of a bottle. But she’s still a captain of sorts. Just not of a sleek space vessel. Now, she helms a raggedy regular boat. She’s still a badass tho. As it seems a lot of her rigid reservations are a thing of the past. She’s middle-aged, jaded, and she’s seen some things so she gives the minimum amount of fucks.

Over the past few issues, Andy and Mila have been escaping some of the vamps that run things on their planet, and reaching Tesla was supposed to help them get off the planet and far away from capture. The only problem is that Tesla doesn’t like being bossed around, and the time that it took to get on the right page was too much. My guy Andy gets a stake to the heart and Mila, Tesla, and her first mate, Helda, set their sights to the open seas and a ship that can get off-world. Don’t worry about Andy, he’s not dead but he might be pretty different the next time we see him.

In its first five issues, I don’t think we can say what this series is building towards quite yet, but if you would have told me a few months ago that we would be getting a story that featured pirates on the run from vampires, I wouldn’t have believed you one bit. Yet here we are, and I still don’t believe it.  I’m all here for it, though. Whatever’s to come, I’m excited to see the dynamic between Tesla and Mila. Tesla is already rough around the edges. She’s always been that way, but now with another kid around– a kid that’s no doubt going to remind her of Tim-21– it’s bound to get interesting between them.

Ascender #5 gives us pirates vs. vampires plus a jaw-dropping moment from one of the series’ main characters.