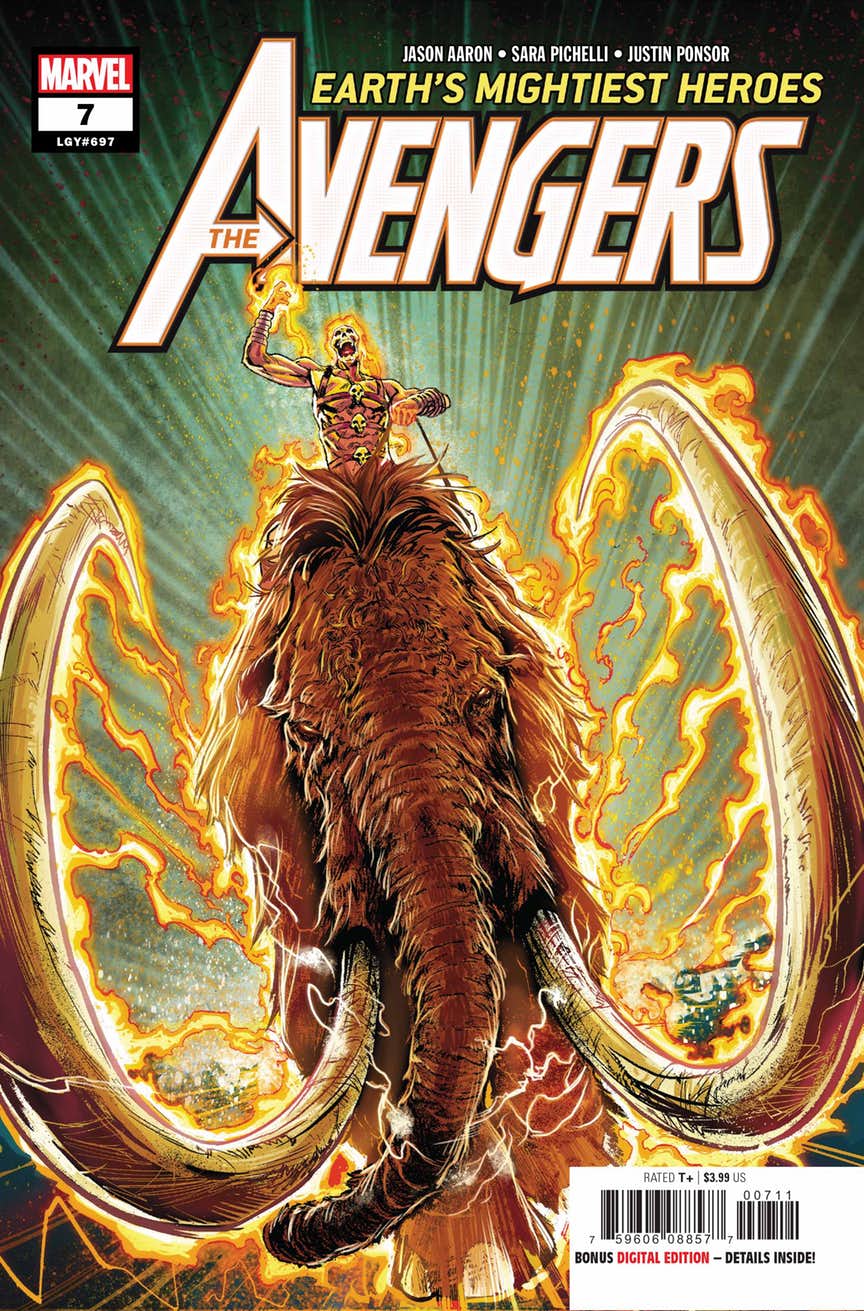 Avengers #7 was the kind of comic you read where you just know that the creative team probably had as much fun writing and drawing it as you did reading it. Jason Aaron writes and there’s a surprising guest appearance by Sara Pichelli on art. Pichelli occupies a special place in my heart as the co-creator of Miles Morales.

From the start, Aaron and Pichelli throw us into a flashback to one million B.C.E. A nameless boy smarter than the rest of his cave-dwelling tribe meets a handful of iconic names in the Marvel Universe, becoming the first Ghost Rider in the process. After his tribe falls prey to a traveling stranger armed with intelligence and and advanced weaponry, our future hero is moved by a thirst for revenge. One could say he was possessed by the Spirit of Vengeance (Ah? Get it? Anybody?). He gets the power in straight biblical fashion from a smooth talking snake who reveals itself to have a familiar name. Now, armed with a flaming skull and an equally inflamed mammoth, our Rider is ready to do battle in ancient epic fashion. The fight includes a surprise reveal of the villain followed by the appearance of two other ancient Avengers.

When the “Ancient Avengers” were revealed in their big Marvel Legacy release, I audibly rolled my eyes (trust me, it happened). Truthfully, I’m still not too impressed by the concept. But this solo story was just fucking good. The story had a beautiful mix of Marvel mythology and actual classic literary tropes and myths like the hero quest and temptation by an evil serpent.

It was great to get a little taste of Sara Pichelli. She really got to play around with the medium in a story of dank caves, snowy tundras, and flaming mammoths. It was just amazing to look at. There’s a fair amount a conversation between the hero and villain which worked out because Pichelli puts a lot of dynamism in the characters’ faces. You can feel the tension of the scene and it makes the comic that much better. It’s a shame she won’t continue on the book in the upcoming arc but it was great while it lasted.