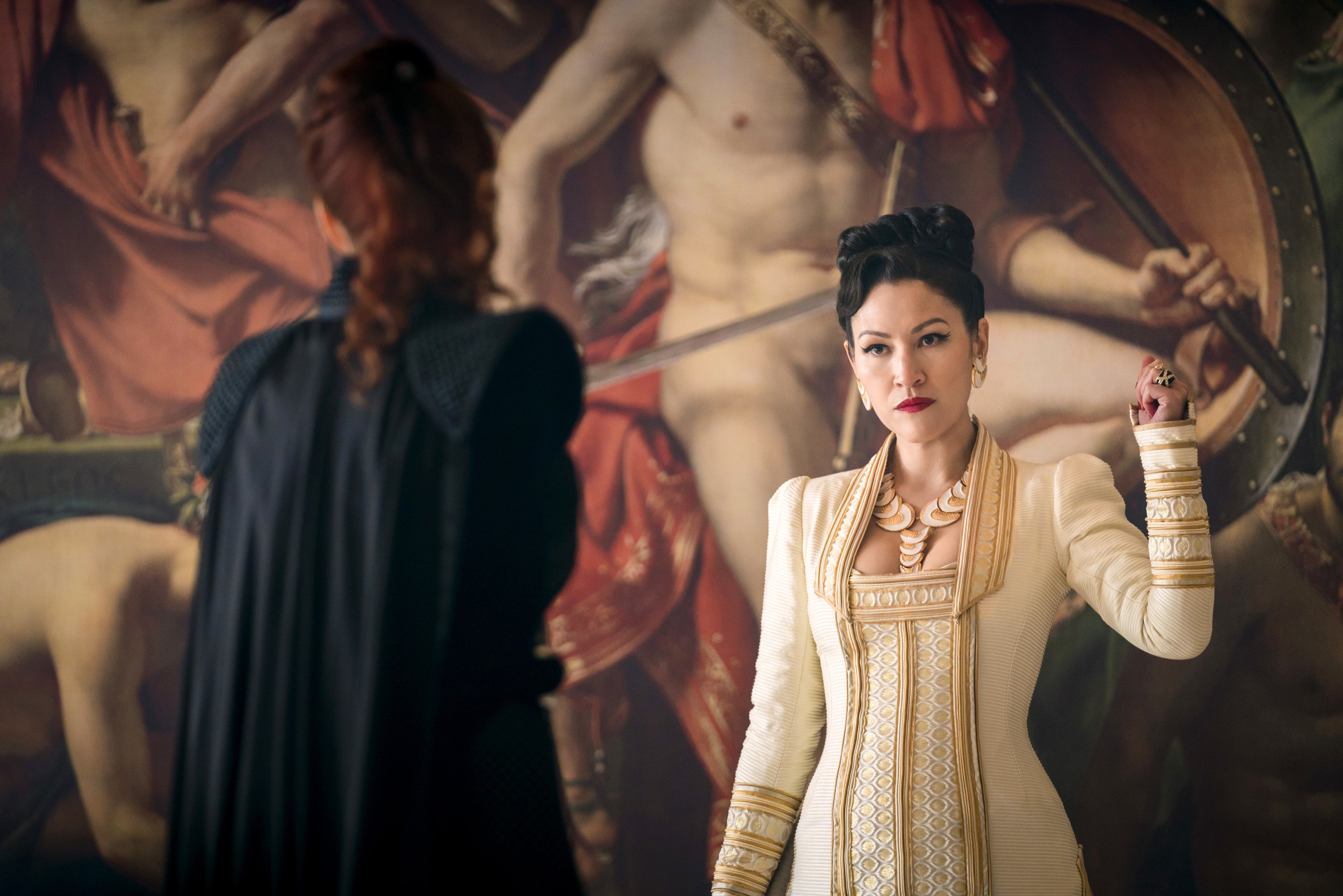 We begin with the image of the Master having a vision that seems to freak her her out. Straight away, we move on to the Azra Museum, where the majority of this episode takes place. As MK tries to teach Nix how to manage the dark gift, all of a sudden he sees Sunny and Bajie arrive with the latest crop of cogs. MK attacks Sunny, goes all black-eyed, and beats the shit out of Sunny. Pilgrim stops him before MK can snap Sunny’s neck for killing his mother.

As she nurses his wounds, Cressida calls Sunny “Sanzo”: a name that Pilgrim seems to know, as well. Pilgrim tells Sunny that they are brothers from the lost city of Azra, chosen to lead. According to Pilgrim, the two of them — along with the sister Sunny can’t remember — were attacked by the Black Lotus. He tells Sunny they can “shape” Henry’s gift, and proceeds to temporarily heal the child.

Out on the Island; Pilgrim’s zealots find the entry to the Meridian Chamber, the birthplace of Azra. Cressida tells Pilgrim that in order for the machine to work it needs an offering from both Pilgrim and the Catalyst: in the form of the Azra compasses.

Meanwhile at the Sanctuary, Minerva and Gaius plot on Baron Chau. Honestly, all I can think about is how equally hot the two of them are, and how much I ship them. I came out of my ponderings long enough to see these two lovebirds kiss, which: FINALLY.

Elsewhere in the Sanctuary, Lydia and Moon discuss the upcoming battle with Baron Chau. Lydia wants to be on the frontlines because she knows if Minerva is killed, she will have to take charge anyway. Moon would rather she stay away from battle, but no one tells Lydia what to do (which Moon seems to already know about her). They, too, hook up. All of a sudden, I’m a bit overwhelmed by the romantic relationships of my two favorite lady Badland badasses. I didn’t really enjoy all the cheesy dialogue between Lydia and Minerva talking about cleaning up their husbands’ messes, and this nonsense about “a woman’s work is never done”. The feminist solidarity doesn’t make up for the fact that four out of five of the top folks in the Butterfly Nation were boning the night before.

As Bajie wanders around the Island Museum, we find out that 1) He can read Azran and 2) He has trust issues when it comes to the priestess and her motives. Bajie asks Cressida about the Meridian Chamber and deduces that the last time the Meridian Chamber was activated the end of the world happened, along with the creation of the Dark Ones. What Pilgrim and Cressida want, aaccording to Bajie, is to create an army of Dark Ones only Pilgrim can control. I’m gonna go with NOPE on that one, thank you very much.

Down the hall, Sunny brings Baby Hank to meet his Uncle MK, who finally uses his words and confronts Sunny about murdering his mother. Sunny admits he doesn’t even remember killing her, and decries his life as a brainwashed Regent. What Sunny really wants, though, is to find out from MK if he can trust Pilgrim. MK warns that everything Pilgrim says comes true, whether good or bad, which sounds really foreboding.

At last, our third old married couple, Bajie and Sunny, have it out about Pilgrim and the Azra zealots. These two are all the drama with none of the satisfaction that comes the night before battle. Sunny is single-minded and only cares about saving Henry, which Pilgrim claims can happen if Sunny plays his part. Bajie feels very strongly that the Azra zealots cannot be trusted, and he tries to steal a bomb to blow up the Meridian Chamber. In a total dick move, Sunny lets Bajie get taken prisoner and prepares to activate the Chamber.

Out near the border the Widow and Chau battle it out, and, can I get meta for just a moment? Sherman Augustus, the actor who plays Nathaniel Moon, shows up and shows out in this scene! This had to be a blast to film, with an entire battle going on and all the amazing fight choreography. Anyway, Nate Moon is a killing machine and honestly, I love one Regent. This fool dropped his bowler hat, got an arrow in the shoulder and killed fifty-leven of Chau’s clippers while Lydia held the last line of defense. Even wounded, Moon is a beast, but he can’t escape a clipper who has him on his knees, ready to chop his head off. Luckily, Lydia has the bow and arrow set that the Widow gave her when they had that cheesy pseudo-feminist conversation earlier. She shoots homeboy in the eye and slow-mo rears up on her horse. This is the hero saving the dude in distress, if I know my archetypes. After winning the battle, Moon realizes that Lydia is injured when she passes out after getting to safety.

The Widow, Tilda and Gaius infiltrate Baron Chau’s house. She has a trap ready and waiting. Archers take aim at Minerva’s head and once again, fate intervenes. Before she can get a dozen arrows to the face, time seems to stop and the arrows hang in the air. Cue THE MASTER, who averts the danger and kills Chau and her archers while leaving Minerva alive. The Master promptly sticks two fingers onto Minerva’s head, knocking her out. Did she just get her gift back???

Down in the Meridian Chamber on Azra Island, Sunny and Pilgrim place their compasses in the slot to activate the machine. Pilgrim takes Henry into his arms, and heals him right then and there. Sunny thanks Pilgrim but when Pilgrim opens his eyes, they’re black: having absorbed not only Baby Hank’s sickness, but also his power.

Bajie done told ya, Sunny, not to fucks with these crazy folks.