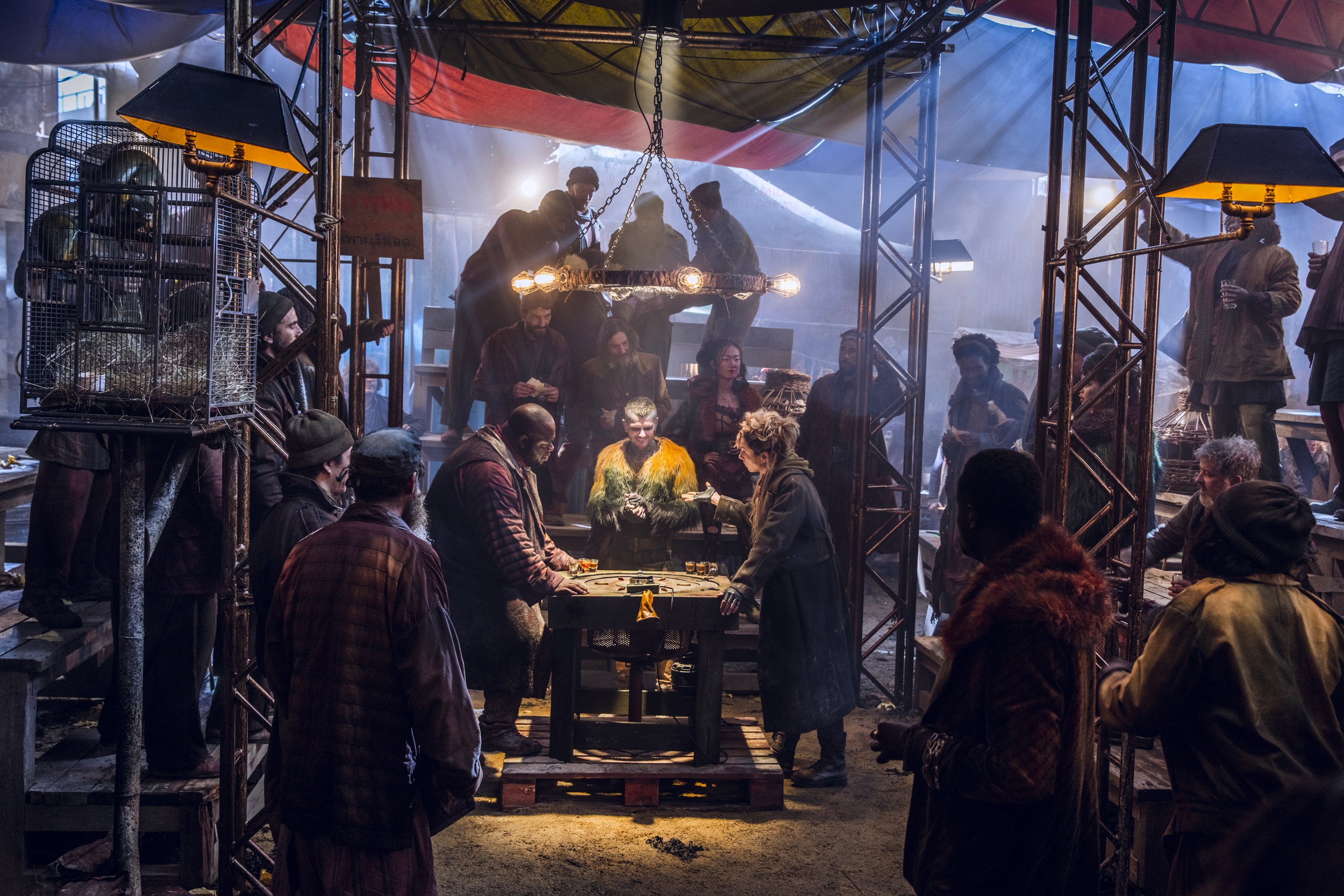 This episode begins in a place we haven’t seen before. It’s a Badlands marketplace, where we see the regular folks hanging out, selling wares, and interacting. The setting is colorful, exciting, and one of the more visually interesting episodes I’ve seen in a while. There is booze, dogfights, and a knife game of chance that involves a woman who turns out to be Bajie’s ex-wife, Lily. Excuse?! Yeah. My main bae, Bajie married a smuggler badass then ran off Bajie-style to go chase Azra. He and Sunny need her help, but she is still pissed at Bajie for being a dick at some point in their shared past. After a pretty intense fight scene that involves Bajie, an octopus, and Baby Hank along for the ride, the four of them escape to Lily’s boat and head down river toward the Azra Museum.

Meanwhile, Lydia, Tilda, and Odessa discuss the need to work together or die. Lydia wants to eventually help the cogs out of serfdom, and Tilda wants to save the refugees, but all Odessa wants is out of the thug life. Tilda tells her that she can’t just abandon the refugees, and Odessa takes that to mean Tilda is willing to abandon her, instead. They kiss and then Odessa is out, and I think they just broke up, ya’ll. I will truly miss the LGBT representation of Tilda and Odessa. Just don’t go running back to MK, because he is acting like a total douche at this point, girl.

Over on Museum Island, Pilgrim preaches to the newly kidnapped refugees, letting them know they are free to leave, but they should really stay. One of Chau’s clippers lets Pilgrim know that Castor has been caught, and Pilgrim immediately knows Cressida sent him out to die. He confronts her, calling the priestess disloyal and sneaky AF. He threatens her to suffer if she goes behind his back again, leaving Cressida to contemplate her life choices.

Back on the boat, Sunny and Bajie have a broment as they discuss Bajie’s marriage and past. Bajie admits he was an awful husband and that Lily might seem shady, but she has a good heart. As the two of them stand there talking about their feelings and whatnot, Sunny has a vision of himself as a young boy walking across the boat deck. He tells Bajie that ever since Auntie Ankara’s house, he’s been remembering more about his childhood. He also believes he’s been on the boat before, and has a couple of memories that involve what looks to be a group of refugees being transported in the Lily’s boat, which was given to her by the River King. Now, if you remember, the River King is the dude who sold Sunny into slavery when he found out Sunny hadn’t given him MK’s head but an imposter’s instead. He HATES Sunny. Apparently, Lily owes him money and shouldn’t even be on the river while he’s looking for her. Too much river-based drama for me, fam.

Sit Down, Be Humble

Tilda bucks up and decides she has to fight alongside Minerva, even if she doesn’t trust her mother any longer. She doesn’t want to be regent, but Tilda is willing to help the Widow beat Chau and win the war if it means the refugees can find peace. The band is back together, guys! Minerva reveals that she has Castor and tries to find out about Pilgrim’s gift, but Castor remains loyal. He doesn’t tell her anything she wants to know, and Nathaniel Moon thinks they should chop off his head and send it to Pilgrim. For once, the Widow is more levelheaded, and she decides to tend to his wounds and send him home.

Lydia, Tilda, and the Widow head back to Museum Island and try to solidify peace with Pilgrim. Minerva doesn’t want him as her enemy, but she also has no desire to join his cult. Pilgrim asks Miverva to humble herself to him, and I swear I laughed out loud. Have you MET the Widow?? She tells him that she will not humble herself to him or any man, and it’s a win for futuristic feminism, ladies and gents. Ginger queen is out here ten steps ahead and lets Tilda know she has a plan that involves everyone underestimating her because she’s a woman.

On the riverboat, Sunny finds himself surrounded by the River King’s assassins, who Lily sold them out to, because of course she did! They have sweet Bajie with a knife to his throat, and the River King tells Sunny to come quietly.

*Narrator’s voice* He does not.

A pretty great fight scene ensues on the boat deck with folks falling overboard and barrels barreling over people. In the end, Sunny does the damn thing, per usual, and Lily has a change of heart. Together, Sunny, Bajie, and Lily take care of the killers and capture the River King. He offers to lead them to Pilgrim and since he does own the river routes, it seems like a good idea to tie him up and keep him hostage.

Those doubts that Castor has been holding onto finally surface now that he’s home and with Nix. He tries to tell her that perhaps Pilgrim is wrong about more than they know, but MK walks in, super nosy, and yells at Castor not to talk to Nix that way. Seriously, MK needs to mind his own business, but hey, that’s just me. Castor flips out and tries to fight MK, until Pilgrim shows up. He tells Nix to take MK downstairs so that her brother can sleep. Nix grabs MK’s hand, all in front of her bro, and takes off. Is it just me, or is the dynamic of this “family” incredibly strange? That point is reiterated when, after comforting Castor and showering him with love and affection, Pilgrim scoops him up and breaks his neck.