Season 2 / Episode 7, The Book of Blood: Chapter Three: The Sange

There is a thin line on network television between a sci-fi show doing the genre well and crashing and burning, never to be seen again. Variables such as talent, air-time, fanbase, writing, and themes can make or break a show. Inherently, superheroes are otherworldly, whether because of origin or ability. The superhero is a tenet of science fiction, in a way. The superhero is an embodiment of technological or environmental advancement. They are tasked with balancing “normal life” with saving the world from itself.

What I have enjoyed so far in Black Lighting is the show’s ability to ease into science fiction, particularly for a Black audience. Plotlines involving meta people and pod kids with powers has been balanced out with the depiction of life in Freeland for a Black family with superpowers. That is, until this part of the story. All of a sudden, there are folks bleeding metal, white supremacists with powers, and hot bartenders who metamorphosize into who knows what. *Heavy sigh* We were doing so well.

This episode starts right where the last one left off. Jefferson is looking for the missing Perdi baby and Anissa helps Anaya with the Sange twin. After briefly communicating with Anissa, Jefferson decides to go into Sange country. There they have Perdi hanging from the treeline outside the property. Not a great sign, but Jefferson is in a pretty decent mood since he found Gambi’s drone tracker in the bushes on his walk through the woods. He admits to Anissa that his equipment needs recharging, and lo and behold, gets caught up with the Sange pretty fast. 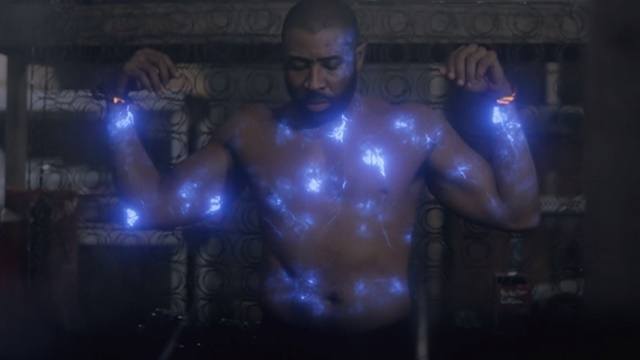 Of course these white folks have all the vestiges of white supremacy. There’s a confederate flag on the wall and reasoning from The Looker, Sange HBIC, about Black power versus white power. “Why is white pride racist and Black pride okay?,” she asks innocently. Ugh. Jefferson seems almost as annoyed as me. He busts out of their ridiculous set up, in which they plan to electrocute Black Lightning. Really? I mean, no one thought that perhaps this man could possibly have powers that are unique to his being and not his suit? He escapes and finds the little Black baby they’ve basically left upstairs alone. He then heads over to Henderson’s house to drop the baby off and find Anissa.

Back at the old abandoned hospital (??), Anissa brings Lynn in to help with the Perdi baby and Anaya. They both notice the metallic gleam in the baby’s eyes and the fact that the alloy sample Anissa took from Deacon basically rolls out of her purse to try and reconnect with the baby. The same thing happens to The Looker, so there’s definitely more story there, unfortunately.

At the compound, the Looker “senses” the baby and the Sange are soon at the hospital to confront the group. Right before Anissa is about to get choked out, Jefferson shows up and the two of them take out The Looker. Anissa knocks The Looker into next week. She’s left bleeding out, while all her followers wake up from her mind control. Anissa goes into a completely adorable rant about mind control and Theta Waves while Jefferson suggests they give The Looker to the ASA. Fun times, lady! Good luck with those guys.

After the showdown, Anissa takes Anaya home, where they find out Anaya’s mother died in the fray. Anaya isn’t too excited about being home, but her father accepts her and both babies with love and open arms. Anissa heads over to Grace’s house, where they snuggle on the couch watching sitcoms. Grace excuses herself to head to the bathroom. Her skin is morphing into something we haven’t seen before. Could Grace be a secret meta? Who knows, honestly. Whatever is going on, she’s keeping it from Anissa, which will most likely take a wrong turn somewhere down the road.

After Jefferson leaves Anissa and presumably drops The Looker off with Lynn and the ASA, he heads over to the exact location of his bestest bud and father figure, Gambi. The pair have an emotional reunion, and Gambi apologizes for playing dead. Still, he realizes that whoever tried to kill him is still out there and insists on staying hid for a while longer. Oh, Gambi! We love ya, bud.

Meanwhile, Jennifer and Khalil are going through it. Jenn is nowhere to be found, but has been to therapy lately. The Pierces visit her psychic therapist, who is discreet, but spills a wee bit of tea as soon as she’s confronted by Lynn and Jefferson. She tells them that Jenn is more powerful than any meta she’s seen and they should be careful with her and the path they put her on. Jefferson seems to accept this more than Lynn, but Lynn isn’t the one with powers, after all. Elsewhere, Jenn and Khalil discuss Tobias’ hold on him. Jenn decides to get involved and helps Khalil escape Freeland. She reveals her power to Khalil, and the two of them kiss, then roll off into the sunset and out of Freeland.

With only a single episode left in the season, I’m wary about the loose threads left in the narrative but hopeful that Black Lightning will get back to basics and focus on the numerous family and community issues that have come up in the last few episodes. Here’s to hoping!