Season 2 / Episode 6, The Book of Blood: Chapter Two: The Perdi

The Looker? I don’t know her.

What? Did the writers find out not enough white folks watch Black Lightning? Is that why we have this weird storyline involving really racist white folks in the Southside with super powers (I just threw up a little bit in my mouth writing that sentence). I’m just. No. We were doing so well! What I’ve always loved about BL is that the show seemed to be written by Black folks for Black folks. It didn’t worry about catering to the typical comic book fanboy demographic (read: white, cisgender, male). BL transcended that mess. But now *wails and tears clothes* NOW I am just so confused.

As my fellow Black Lighting fan and BNP writer Lauren Bullock, so eloquently puts it, “Hm? The Looker? Never heard of it. Weird how they’re only focusing on Lynn and Jen.”

We start this episode with some weird white girl who seems to be the source of the silver alloy what not coming out of Deacon in the last episode. This lady, apparently called “The Looker”, has infected a whole bunch of white meth-heads to do her bidding, which has not been explicitly named, except we know it’s super racist. Okay. Apparently, there are two groups in South Freeland, the Perdie, who are white, and the Sanjay, the Black folks. They have hated each other since the beginning of time, or some shit, for no real reason except racial differences. Enter Anaya and Deacon, starcrossed lovers, who are having a child together.

Anissa, the ever conscientious medical worker, has decided to hunt down this random pregnant patient to let Anaya know her boy Deacon came into the Clinic all roughed up, leaking metal from his face, and died in Anissa’s arms. At the farm, Anissa is confronted by a bunch of Black hillbillies with guns, but she’s just there to help, friends. When she tells Anaya about Deacon, IN FRONT OF EVERYBODY, Anaya goes into labor. Not only that, but her Black boyfriend is pretty pissed that she picked Deacon over him. So pissed, in fact, he was the one to kill him.

God this is bad, but it gets worse.

In what seems like a span of 4-7 minutes, Anaya gives birth and, OMG, she’s having twins! No one knew! The first one is gathered up by Anaya’s parents but the second one–dun dun dun– is white. White?! Yup. She done torn the family apart! On the other side of South Freeland, the Looker knows something is up and sends her meth metalheads out to the farm to find out what is going on. A fight breaks out, but luckily Black Lightning shows up because Anissa has her tracker on and SURPRISE Gambi is alive and well and helping out via drone. Wait. Gambi’s what…?? No wait, hold on, there’s more. The Looker ends up with the Black baby and she’s like, “eeewww bring me the white one.” And scene.

Look, I say all this because I had to get it out of the way and because I thought if I write it out, maybe the plot will start to make more sense.

*Narrator’s Voice* It did not.

As my fellow Black Lighting fan and BNP writer Lauren Bullock, so eloquently puts it, “Hm? The Looker? Never heard of it. Weird how they’re only focusing on Lynn and Jen.”

Over at the lab, Lynn is forced to deal with the death of the 14 pod kids at the hands of Dr. Jace’s false data. She stands in front of the parents of all the kids in stasis to tell them that 14 are dead but doesn’t divulge who. Parents are understandably upset and an angry mob forms to confront Lynn, who is escorted out of the area by her crew and the hubby. On her way home, Lynn is once again confronted by the same angry father, who lightly crashes into her fender in order to get information out of her. She can’t tell him anything, though, and drives home shaken and not a little freaked out. 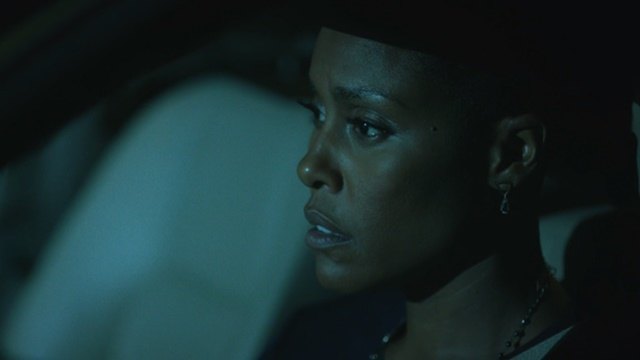 At home, Lynn opens a bottle of whiskey and starts to drink her sorrows away, only stopping long enough to snap at Jennifer, who comes downstairs for a snack. Ever the pragmatic, Jenn tells her mom while the deaths were not her fault, the pod kids were her responsibility, and Lynn answers back by storming out of the room to go worship the porcelain goddess. After she vomits up her dignity in front of her teenage daughter, Lynn just kind of collapses into her sadness, which is a very real outcome of a horrible situation.

Even though I hated this episode, this interaction between Lynn and Jennifer felt incredibly poignant and necessary to the *aherm* plot of the show. Lynn is pretty hard on Jenn, and I enjoyed seeing the mother/daughter dynamic shift a bit. Lynn isn’t perfect. No mother is, and our relationships with our daughters suffers when we try to pretend we are. Speaking as a mom of a teen, this scene felt very organic and important to character growth. That being said, I dislike where this whole *hand waves* thing is going.

Over at 100 headquarters, Khalil is still acting a fool for Tobias. This boy! He needs a talking to, for real. Tobias sends him to kill the good Reverend because Rev refuses to walk away from the Clinic. Well, the Reverend don’t play, and lays into Khalil when he accosts him at his car. Short of calling Khalil by all three names, the Rev lets Khalil have it. He reminds Khalil that he don’t have to do a gotdamn thing but “stay Black and die.” Yes, brotha! Ain’t that the truth? So, Khalil lets the Rev live, which upsets crazy-ass Tobias, who decides to teach Khalil a lesson. With his fists.

After the fight with Tobias, in which Khalil gets his butt kicked, he goes to visit Jenn. She hugs him and tells him he’s not alone, but really, this boy made his choice. I don’t feel sorry for him. He does find out that Tobias was the one to shoot up the church march and the reason Khalil was paralyzed in the first place. Which, honestly, I thought he knew already. Who else would have done that, dummy? God. This episode was awful.

We have 2 episodes until the mid-series break. Here’s to hoping this storyline a) doesn’t suck as much as I fear it will and b) is over soon.