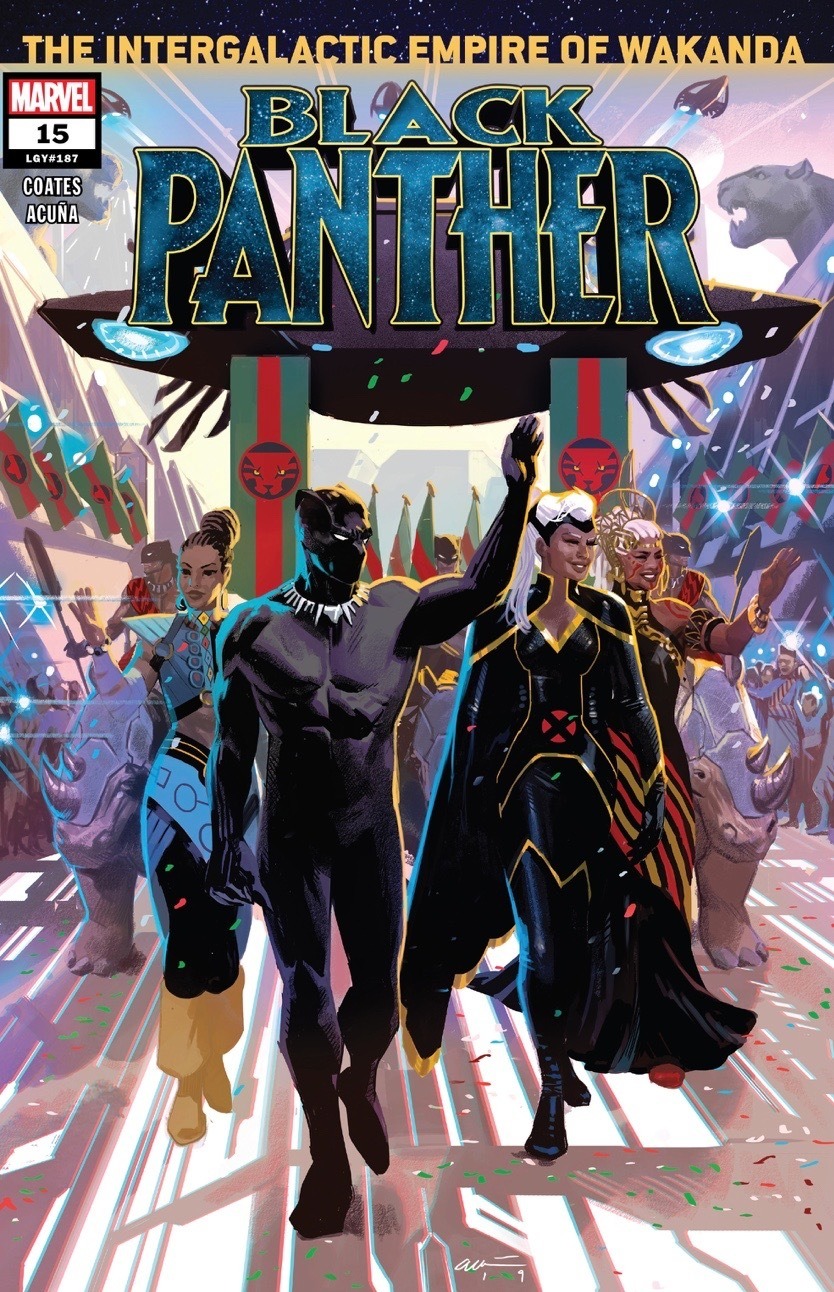 The Return of the King

T’Challa returns to Wakanda Prime and things are good. Really good. Good enough that he even questions if he was the problem. Shuri grounds T’Challa in the facts: his presence, actions, and tremendous nobility have brought on this ‘second golden age’ of Wakanda. The book takes a lot of time to flesh out where the nation sits in the global context of the Marvel Universe. Coates flexes on the panels — some are entirely dominated by the dialogue. Where this might be a detriment to some characters, the cleverly placed text sets up the trajectory of this arc with little effort and plenty of impact. 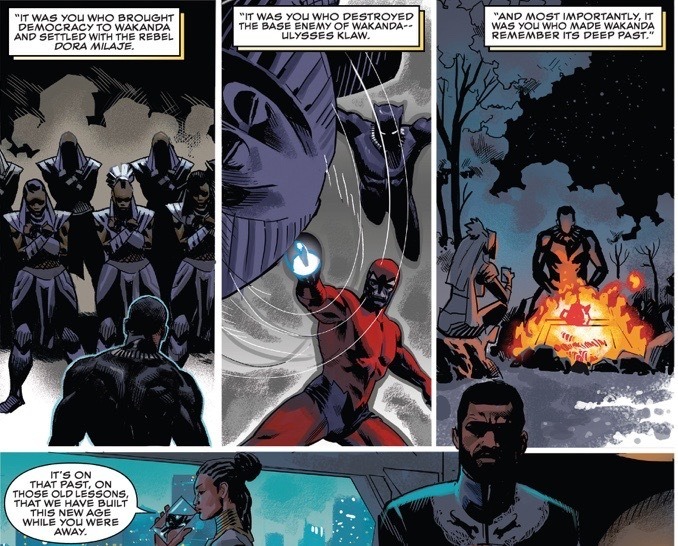 Black Panther #15 dwells on T’Challa’s sense of duty, post space war, by exploring how he relates to the world when he isn’t fighting. In issue #14 he spoken to the Queen Mother Ramonda about the state of the nation. In #15 he politics with Shuri about geopolitics. Standard kingly things. On her way out, T’Challa shows his hand and asks if she’s seen Storm. She’s away on X-Men business. Shuri assures him that she’ll holler when she can. He’s all brooding and thoughtful when that lightning strike lights up the Wakandan skyline. Ororo ‘Thee Storm’ Munroe knows how to make an entrance and plays no games. Can we talk about the Afrofuturist Black excellence of Kimoyo beads being used for a royal booty call? There’s no carbon footprint AND no paper trail??? I digress. 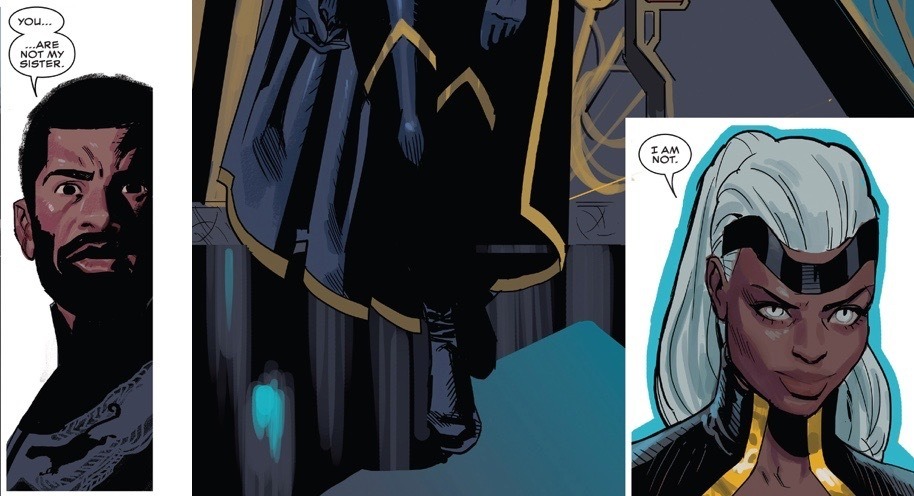 Two Places At Once

Post-coital cuddling with the goddess boo thang is short-lived, as T’Challa gets right back at it and hops on a call with Eden (aka the teleporting mutant Manifold) and the Maroons. Eden is hyped to not be under N’Jadaka’s control but admits that he spent the whole time tortured broadcasting live from the sunken place. T’Challa mentions remembering who he was now but feeling more like discovering a life he’d once lived. Torn between the peace he deserves at home and his duty to return the memories of the galactic Wakandans, he doesn’t give full attention to the ‘bio-anomaly’ that registered on the Mackandal. That won’t come up later. Oh wait… 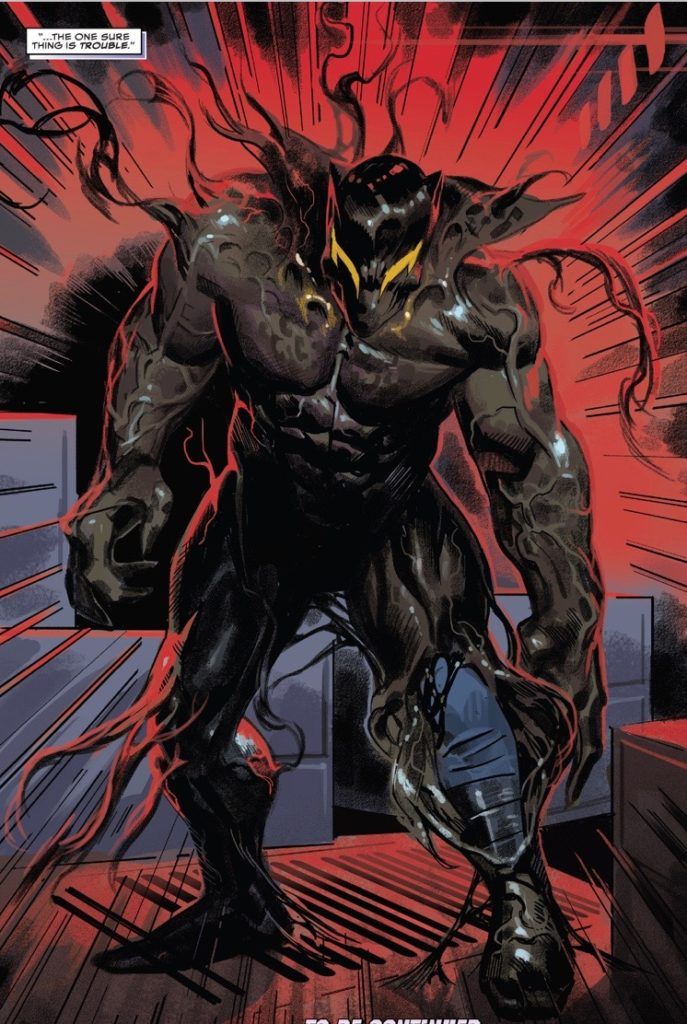 In spite of the milieu of corporate inertia, in the wake of the massive economic success of the Marvel Cinematic Universe, sustained, high-level storytelling and world-building with a triple-A character persists under Coates’ disciplined pen. I’m about to run out of superlatives talking about this book. There are plot arcs on multiple levels playing out and designing a tapestry that can be both a world unto itself and a place to weave in the entire Marvel Comics landscape. There are art choices in panel layout and character design that continue to innovate — Daniel Acuña can draw Okoye doing nothing and make her look badass AF. Facial expressions mean a lot in a comic and are hard to execute; the ‘come hither’ look in Storm’s eyes (scroll back up and see it again) cannot be mistaken. The homie Daniel Acuña is on fire.

7 Kimoyo Bead Tinder Swipes out of 10