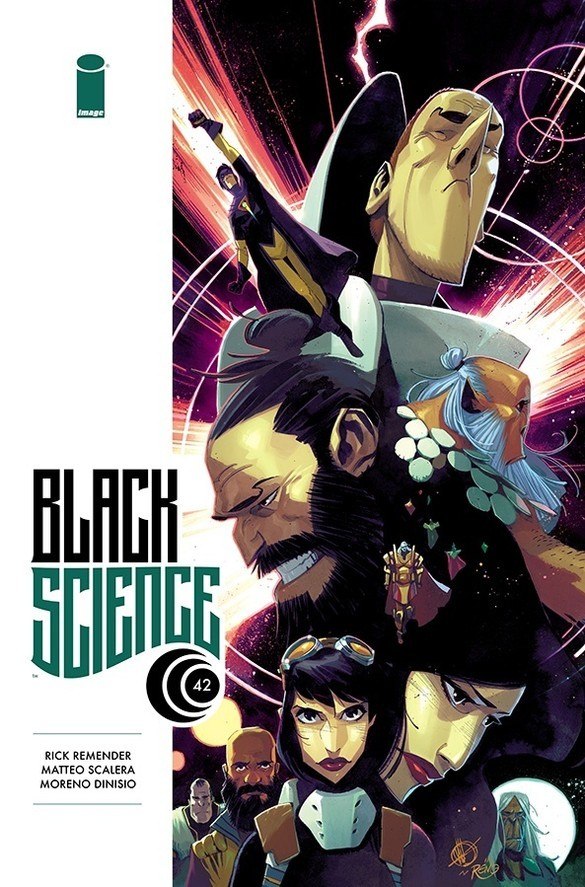 Rejoice, dimensionauts. Black Science has returned and Rick Remender refuses to hold back on building the suspense. It’s the issue before the big finale and things are not looking good under the Kadir Administration. Well, to be more precise, things are looking a little TOO good for Grant’s liking. Kadir and McKay have always been at odds, but it’s nice to see them playing “Dueling Ideologies”. I have to admit Kadir is absolutely stealing the show, leaning into his role as Grant’s nemesis full force. The only thing worse someone standing in between everything you’ve ever wanted is someone giving you everything you’ve ever wanted and never letting you forget it for a second.
Things get intense really quickly and make for a fun chase, while allowing it to sink in that the battle lines are drawn and there probably won’t be a neat ending for anyone at this point. Matteo Scalera is so good at what he does on the art front, it’s hard to pick apart specific things and speak on them. But I can say that one instance Scalera is really strong in is chase scenes, and Remender’s Black Science scripts do chases better than almost anyone else in the business. The intimate moments are definitely strong as well, but when Remender dials the tempo up a notch, Scalera shows up and shows out.

Bottom Line: Remender and Scalera are holding a master class in balancing intensity, strong dialogue and gorgeous action scenes. They have not let their feet off of the gas pedal and it doesn’t look like they intend to going into the big finish. The best advice I can give is to find every issue of Black Science you can possibly assemble, catch up and get into this finale. This is a book that deserves its flowers while we’re here.