After navigating my way to the Hulu Theater in Madison Square Garden, I was rewarded with a clear sight line of the 3Below panel with Guillermo del Toro at the center of the stage. I have alluded very briefly elsewhere to my love of his previous Netflix series, Trollhunters, so of course I was going to catch a sneak preview of the next chapter in the Tales of Arcadia saga.

Trollhunters is a “cookies and milk type of family series,” according to del Toro, a show in line with the memories of watching Johnny Quest when he was a kid. 3Below similarly takes cues from nostalgia, being a modern retelling of an immigration story. Princess Aja, Prince Krel, and bodyguard Vex are all esteemed members of an alien world. An evil overlord forces them to run. The artificial intelligence on their ship, affectionately referred to as Mother, takes them to literally the worst planet in the solar system. A place where no would ever think to look for them: Earth…yeah, I don’t see any lies there, do you? 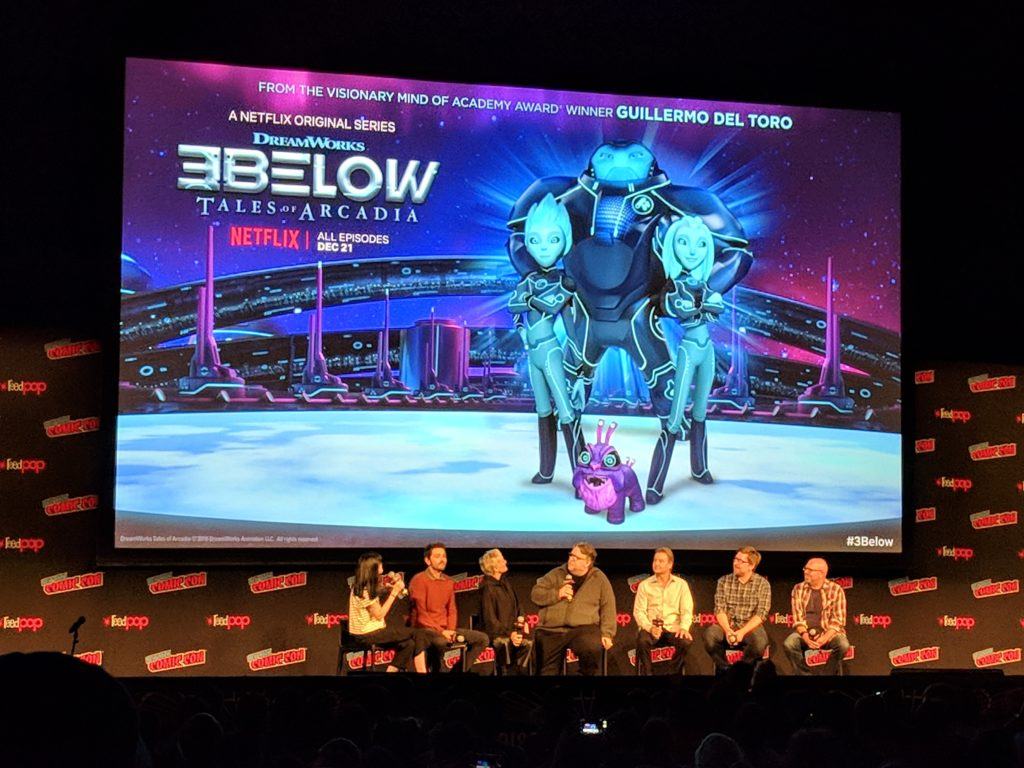 As fate and storytelling would have it, the trio end up in Arcadia. Mother disguises them in three personas: a Latino boy, a woman, and a senior citizen. It is now up to them to make it in a town that appropriately enough has trolls and wizards.

del Toro and the rest of the producers mention how the entire Tales of Arcadia world was greenlit from the start. They have been writing with the future series in mind. We even got to see Aja and Krel in a late episode of season 3 of Trollhunters. One of the episodes of 3Below will show those events from their perspective. Characters like Steve, Eli, and Gnome Chompsky will also be prominently featured in the series. It’s a truly grand undertaking. It will bring a smile to many faces, whether they are five or fifteen.

Diego Luna (Prince Krel) and Glen Close (Mother) from the voice cast were on the panel absolutely gushing over the opportunity to work with del Toro. Luna even joked about how “everyone from Mexico just melts” when they get a chance to collaborate with del Toro. He is excited to do a story for his kids who are fans of Trollhunters. Close talked about her adoration of animation. She was equally excited to bring Mother to life. Rounding out the cast includes talent like Orphan Black‘s Titania Maslany as Princess Aja, Nick Offerman as bodyguard Vex who ends up being a senior citizen who speaks like Conan the Barbarian, and Nick Frost as an alien refugee who has been on Earth for a minute.

This story is one about transformation for del Toro. It is about how we are so used to black and white definitions of good and evil, when we all exist in the gray. 3Below is a story that reminds us our fallibility, that it is okay to falter and make mistakes. He jokes about a saying he had in the writers’ room: “Your ambition should exceed your budget.” Even on a TV budget, del Toro and crew aspired to make a feature film quality product.

He ends the talk saying how the story ultimately feeds the soul. The creative team mapped out the story over Cuban food, aspiring to be like the other modern gold standards of animation, Adventure Time and Gravity Falls. He called all his work a fairy tale, and listen, I was pretty enchanted.