There’s a scene in Ocean’s 11 when Rusty and Danny are putting together the squad and going through their options. They need drivers and the following exchange goes down:

“I talked to the Malloys yesterday.”

“Yeah, they’re both in Salt Lake City, six months off the job. I got the sense that they’re having trouble filling the hours.”

Fam, our peoples over at Fox News and Breitbart? I think they’re having trouble filling the hours. They got nothing else better to do.

Fresh off the release of Captain America: Sam Wilson #1, written by rising star at Marvel, Nick Spencer, and drawn beautifully by David Acuna, the new(ish) comic book found its way into the deep end of the conservative conspiracy pool. Which is like when your problematic uncle traps you in the corner with talk about how things aren’t how they used to be. And then you just tolerate the shit cuz he’s family, supposedly, and you bet on the fact that he will eventually tire himself out and move on. And then, all of a sudden he’s comparing the prospect of gay folks being able to get married to bestiality and you wake up inside the conversation like, WAIT HOW THE HELL DID WE GET HERE UNC?!?! We talkin’ about comic books, y’all, HOW THE HELL DID WE GET HERE?!?!

If you haven’t read the newest iteration of Captain America, he’s developed some opinions that are apparently “un-American.” Well, wait, let’s start at the beginning of this particular scenario. Captain America is Black now. If you’ve been living under a Vibranium shield, then, Surprise! Somehow, this feels relevant to the conversation. Anyways, fast forward to last week, when Nick Spencer, who had consistently killed it on the Ant-Man comic previously, made Sam Wilson into a human being who happened to be in a comic book, which led to Sam having a slight crisis of conscious. He broke from the monolithic privatized army that is S.H.I.E.L.D. He found himself at odds with some of the practices of this country. And then, Sam Wilson, the current Captain America, spoke his mind about the issues that plague the country today. He talked like a hero — one that sticks up for the disenfranchised, the struggling, the underrepresented.

And then, in the comic, it was Sam Wilson can-eat-a-dick-o’clock. And then, in real life, it was half past go-back-to-the-projects. In the comic book, Sam Wilson is called a socialist, anti-American, a traitor, and everything else that Obama has been called in the last 30 seconds by some dudebro on Twitter. In the comic book, Sam Wilson is shunned, abandoned by those that sponsored him and propped up the title – well when the title belonged to someone else, anyway. But that was, creative writing, fam. Fiction, like, ya know? Made up shit, like, ya heard? Until it wasn’t. Until real people, in the real world, with real paychecks used real air time that advertisers shell out millions for to say how out of line the comic book was. That it was a corruption and spreading the liberal agenda.

Fam, I tell you no lies.

(props to you if you make it all the way through these two+ minutes. Hearing “civilians” talk about nerd shit is tough enough, let alone this…)

The segment on Fox ends with the talking head saying, “I just think we should keep the politics out of comic books.” So my first question is, why? The same dudes that can’t keep their ideology out of a woman’s uterus want comics to keep political views out of a fictional form of entertainment. Not much more political than a dude literally draped in the American Flag punching Nazis in the face since the 1940s. Didn’t see the outrage over Mark Waid’s “Strange Fruit” (love you Waid, love your work, but fam, just…no). Didn’t see them weighing in when Greg Land had every woman protagonist looking like Jenna Jameson. So, why can comics be rife with issues of the overt sexuality or racial constructs, but politics is off limits? Ok, cause y’all don’t care about that shit. That’s right.

Well, there’s a few things that Hail Hydra needs to come to grips with if they are going to critique Captain America for his supposed left-leaning views. First, I know it’s confusing because most of the time, comic book heroes don’t age, but this ain’t your Grandaddy’s Captain America, the same grandad that used to pull Black folk off the bus in the Sixties. I mean, it literally isn’t his Captain America; Steve Rogers is like 94-years-old and getting briefs on national security delivered to him with his Boost protein shakes. Second, if Captain America seems to lean left to you, then isn’t Captain just doing what his namesake is doing? Is the country not going left? I know that drives you cats insane, but he ain’t Captain Breitbart. He ain’t Captain Red State and he ain’t runnin’ for Governor of Mississippi. This is America, Hydra. My Captain is Black and my variant covers are blue. Don’t be mad at the setting of the sun. If you’re mad that the villains, who are some cartoonish enemies (Sons of the Serpent) modeled after the Klu Klux Klan, happen to share the same views as you do in real life, I mean… That’s not a comic book problem. That’s a why-are-you-so-terrible, problem. And third, if you gonna be mad about something, don’t be mad about Captain America being pro-immigration. Be mad that Nick Spencer has the ability to predict the future and you don’t. 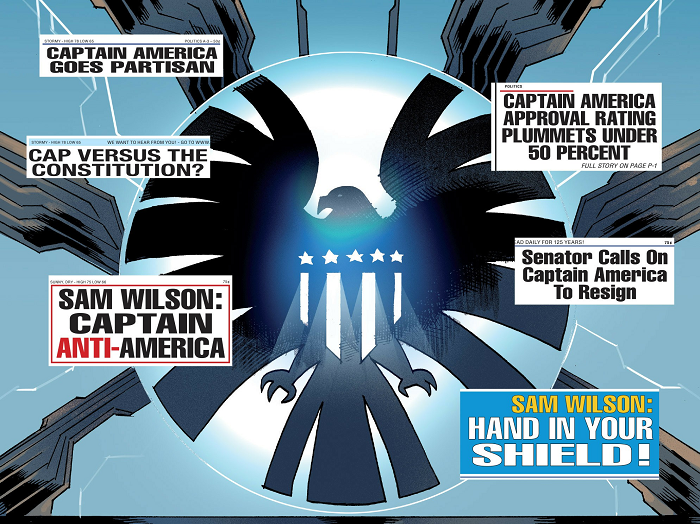