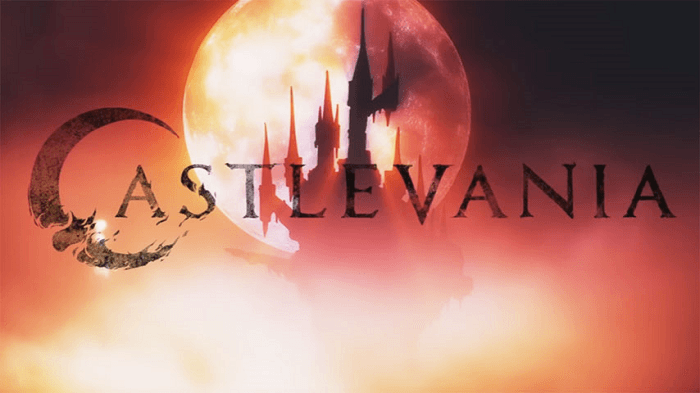 Look here fam, there are few titles that when mentioned instantly show your video gaming credibility from the jump. Castlevania is one of those titles. Symphony of the Night still putting numbers on the board if you got the right hardware. So when it was announced that Netflix was cracking the bullwhip on a Castlevania animated series written by gawd scribe Warren Ellis, you know the nerd streets was talking bout this shit.

Since Ellis has written so many things that have translated well to the screen (Red, Iron Man: Extremis, Trees in development), then him writing a show felt like going straight to the source. It also meant, if you know Ellis’ work, this shit was going to be dark. But yo, we talkin’ bout fuckin’ Dracula my monster hunter, so you knew what this was. 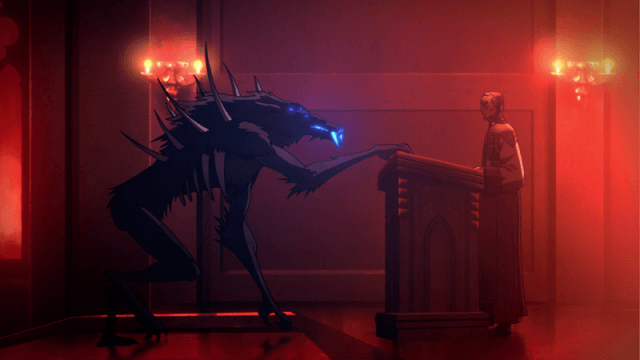 Speaking of which, the show begins showing Dracula, having withdrawn from the human world and lined his driveway with the most morbid of holiday cheer (read: lots of fuckin’ skulls). When Lisa Teppes dares to enter Dracula’s home in search of knowledge, never showing any fear for the vampire, Dracula finally indulges her, then presumptably falls in love with her. When the church accuses Lisa of witchcraft (with the predictable sentence), its fair to say that Dracula is fed the fuck up. He wasn’t even fuckin’ with you humans anyway, man. He promises to take his wrath out on the world in a year’s time for their crimes and ain’t nobody ever call Dracula a liar, b. 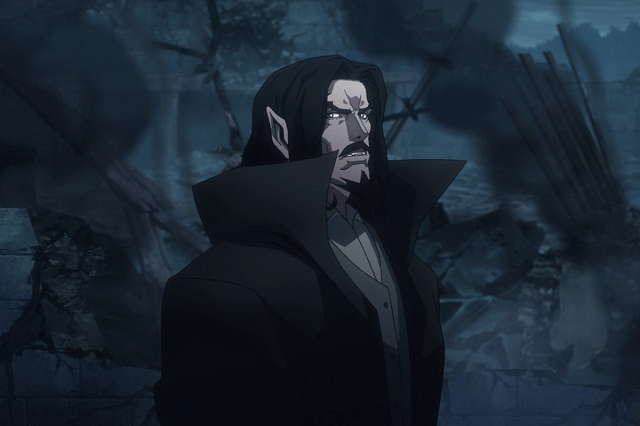 The biggest crime of Castlevania is that it’s only four episodes long. I KNOW RIGHT?!?! But I get it, budgets, risks and all that. It was green-lit for a second season before most people watched the first one, so it’s safe to say we got a lot more coming. The first episode is admittedly slow with some weird pacing.

There are two different time jumps in the first episode and is intentionally ambiguous in introducing a lot of characters, so it feels a bit disjointed. But the story becomes streamlined in episode two and centers on the shows’s protagonist, Trevor Belmont, member of the exiled Belmont lineage who were the monster slayers that kept the creatures at bay.

And fam, Belmont is a badass. Belmont out here putting up Mike Trout numbers fam. Your boy out here crackin’ the whip like Vampire Hunter Indiana Jones. Like, non-Halle Berry Catwoman. Like, that dude The Rock went up against in The Rundown. Look fam, there still ain’t a whole lot of whip references that aren’t racist af, so you gonna have to let me work through this.

Also mixed up in the story is the less than noble members of the Church and the Speakers, an organization that kind of does what the Church should be doing to support the commoners, but are instead more prepped to be the scapegoat for the horrors released upon the world by Dracula. The true tragedy of the very short first season is that these characters were just starting to get fleshed out when you reach the season’s end. Dracula who is prevalent in the first episode is mostly a boogeyman in the subsequent ones, but a foe that will definitely be present in season two.

Have I said yet how adult this shit is? Cuz this shit mature like the backroom of your favorite video store fam. When Dracula’s Army shows up, them cats ain’t just “terrorizing the town folks.” They out here severing limbs and disemboweling people, man. And when Belmont start putting the whips, short swords, and paws on people? They be leaving with less appendages than they came with. Not to mention the language is R rated fare. This ain’t no Voltron nostalgia built for your partner’s sister’s step kids. Shit is all the way real out here. Just brutal in all the right places.

End result? If it weren’t for the fact that Spider-Man Homecoming just dropped one of the hottest verses of the year, I’d say this is the best way to spend a little under two hours right now. And then, cuz this shit so short, watch it one mo gin. Or however many times necessary until that season two drops.