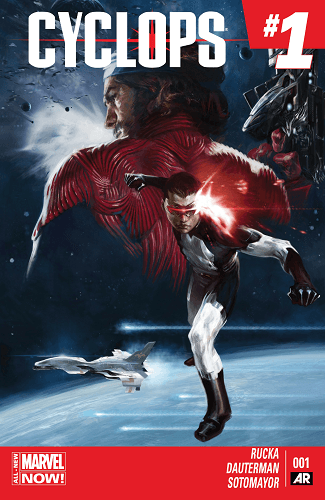 “All of us were in the future. Possibly our Future. Our future sucks.”

Giving Scott Summers his own book is a cool and yet very tricky proposition. As a fan of the most complicated X-Man ever, I was excited to see him gracing his own book, but with the super complicated lineage currently going with the All-New X-Men and Uncanny X-Men, weaving another story into all of that seems daunting. But on the other hand, the wonderful surprise of Scott leaving the X-Men to be with his father isn’t a surprising one when one considers that he’s gotten a pretty good view of his future where he kills his mentor and becomes the face of a very unpopular uprising. Thankfully, with all that noise around Cyclops #1, at least a writer the caliber of Greg Rucka is there to see it through.

There is a lot to unpack in Cyclops #1, concerning his decision to leave, his complicated love for Jean Gray and how he deals with the future he wants no part. And oh yeah, that whole “I thought my father was dead, but he’s actually an awesome space pirate.” Somehow, Rucka deals with all these issues upfront and efficiently while leaving time to begin the new adventures of Scott and his father Corsair.

The only minor complain about this first issue is the premise of Scott and his father Corsair trekking out on their own is that we probably lose contact with some supporting characters that had a remarkable amount of body to them in this first issue, especially Corsair’s lover Hepzibah. But I’m sure we’ll get some great personalities as Scott and Corsair explore the universe. We may not have gotten a lead on where the story is going, but it wasn’t needed for this first issue, as we learned that the relationships to Cyclops will drive the success of this book.