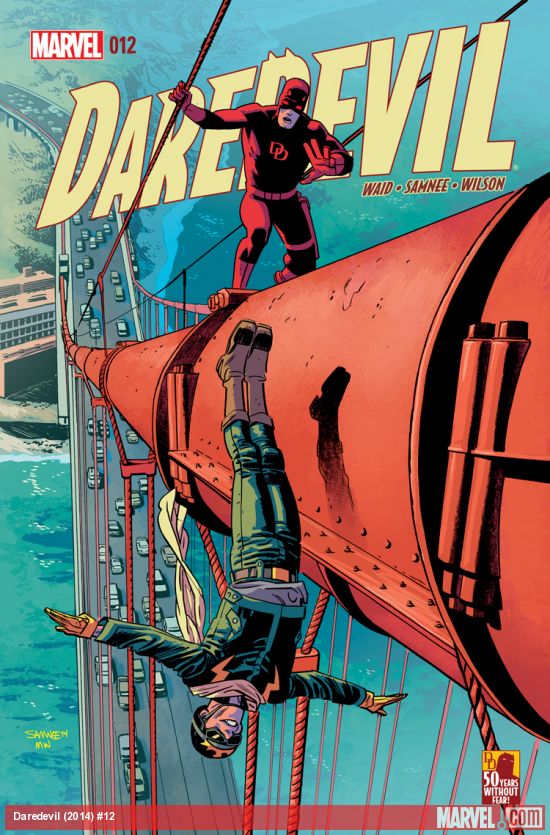 Yo man. Yo man. YO MAN!. Mark Waid is a fucking problem on this Daredevil run. My man is not fucking around at all. Waid giving us the Daredevil we shoulda got in the movie man. Major motion picture shit. The man so nasty with the story. We join Daredevil in the thick of the action this issue as he is trying to rescue the old stunt-master from being forced to drive up the side of the golden gate bridge cables. Daredevil is out here doing a hire wire act that keeps you hooked. The story is fast paced this time around and I am loving it. Waid is giving us the Daredevil that is truly The Man Without Fear as he chases down the old stunt master.

Now when I say Chris Samnee is a crazy for this one? When I say Chris Samnee out here drawing Daredevil in a high speed chase and pushing his radar to the max? I shit you not that, this is the kinda car chase that makes the news at 10:00 pm. The man is standing out the roof navigating the whip with a bill club tho!?!?! 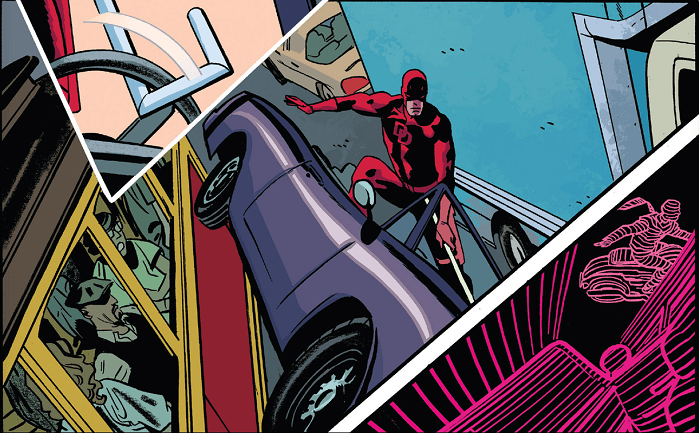 Samnee out here drawing my man technically ghost riding the whip (since he blind) while making the whip go sideways like the M.I.A. “Bad Girls” video! WHAT HERO YOU KNOW THIS NICE THO?!?! Daredevil damn near got cosmic awareness to be pulling this shit off man. The kid too nice. It’s so nice to see Matt back in that action and giving the reader proof to why he has the fearless moniker.

Once the action dies down we get a deeper look into the the elaborate plot that went into this whole ordeal with the new stunt-master. There is something heavy to say about showmanship and bravado that becomes the theme for this issue. I really enjoyed the turn Waid does for the reader. We see how even Daredevil can be played when his empathy is used against him. Waid and Samnee most definitely delivered a solid conclusion to this two part arc. I’m hoping we see more of the new stunt-master as he will probably be wanting revenge for being showed up by the original Man Without Fear.