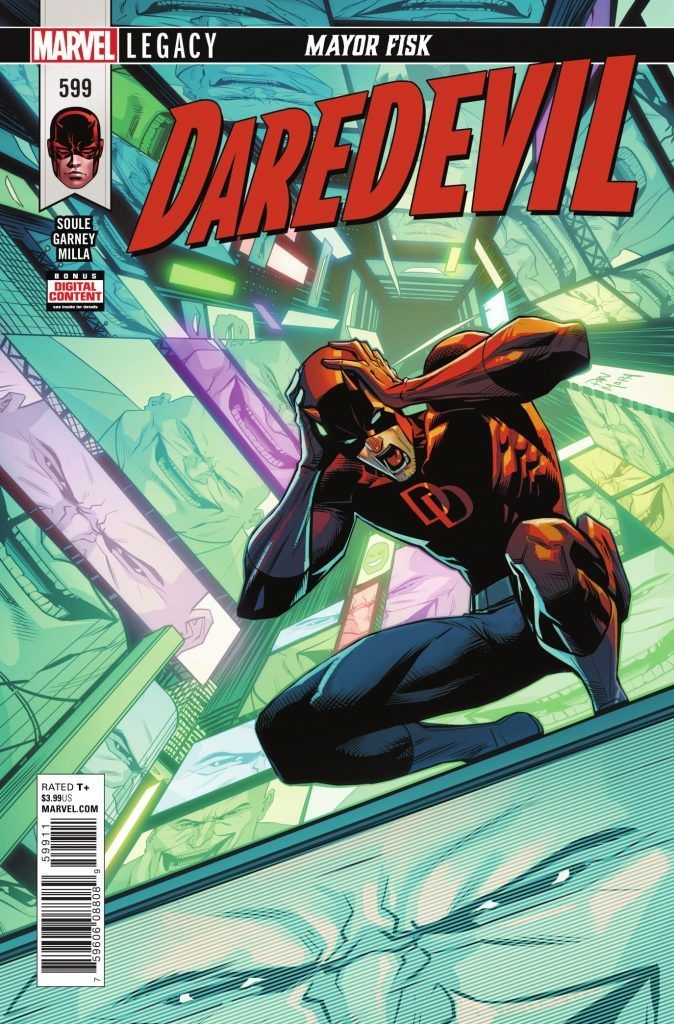 This week we have the pleasure of reading Daredevil #599, written by Charles Soule and drawn by Ron Garney. The fifth issue of the “Mayor Fisk” arc, Daredevil finds himself juggling the newly elected mayor Wilson Fisk a.k.a The Kingpin and the artistic serial killer Muse. Daredevil just needs to pull out a classic trick. Focus on the city, tune out the noise and find his target. What could possibly distract the “Man Without Fear” from a deadly foe like Muse?

This book masterfully captures the current political climate without diluting the power of a solid superhero story. Most of us in the comic book community and especially in the black nerd community can relate to being at odds with the current presidential administration. Daredevil lives the frustration of trying to get work done while navigating the news cycle’s toxic background hum. Finding and fighting Muse is a very pertinent, immediate problem. Fighting Mayor Fisk is still incredibly important but must take a temporary backseat.

I’d like to take some time to once again gush over Muse. Daredevil’s “immediate threat” could’ve easily been Bullseye or even the Hand, taking advantage of a long standing history. For a new character like Muse to take this role and instill the horror and expediency in the reader is impressive. I’d say Muse is probably my favorite new villain in the last five years at least.

Ron Garney’s work compliments an art-centered story arc well. It has a painter’s aesthetic and does amazing things with light, especially during the night scenes. I particularly like the way the light hits Daredevil and Blindspot’s black costumes. The colors contribute substantially to the feel of this book. Matt Milla, the color artist on this book, deserves praise for the work he put into this book.

The double whammy of top tier story and art easily puts Daredevil towards the top of comics Marvel is producing. Next month the 600th issue of Daredevil will conclude the Mayor Fisk story line and be composed by the same creative team. If the last few issues are any indication it promises to be a book deserving of a centennial spot.

9 Donald Trump Allegories out of 10