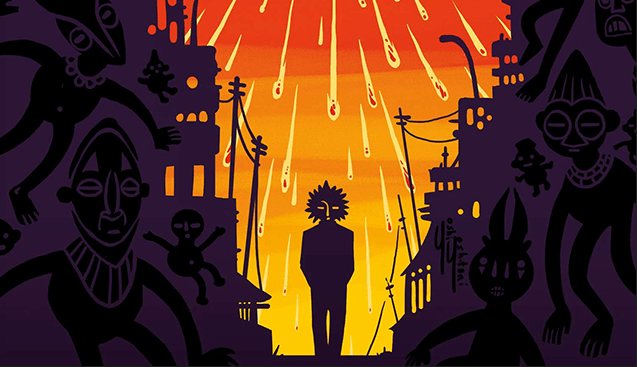 As you know if you follow the BNP Lit Instagram account, I do most of my reading on flights. Some books are best savored in the isolation of a red-eye. I devoured David Mogo, Godhunter by Suyi Davies Okungbowa in a cross-country flight, just me and a cup of bad coffee, squeezed between a stranger and my kid. David Mogo took me so far away, that I didn’t even notice how much I hate flying.

Carefully crafted, David Mogo, Godhunter fits together in three parts. It is a journey of self-discovery for David, the son of…well who his parents are is part of the mystery of the first 3rd of the book. For someone better versed in the pantheons of West Africa, the answer to the question of his parents may be easy to guess; there are plenty of clues. I totally fell down on the job and was totally surprised.

The streets of Lagos, Nigeria come to dynamic life in the book, only it is in reverse — a tragedy called “The Fall” has emptied the streets. We only know about the energy of the city by how much it has changed. This is an interesting approach to describe a city by its ruins, the presence by a progressively bleak absence. In “The Fall” the gods have come to earth, resulting in a crater in the middle of the city and a plague of restless spirits haunting districts and empty spaces. This has utterly unbalanced the government and social structures, leaving regular folks to call on David Mogo when they have troubles. Mogo makes a little money to keep a roof over his head and to help out his adoptive parent, Papa Udi. As in any good noir/fantasy, eventually David takes a job that’s more dangerous than it is worth, and everything goes to hell.

This book will undoubtedly be compared to Nnedi Okorafor’s africanfuturist fiction, as both are Nigerian sci-fi writers who set their works in Lagos, with roots deep in the culture. In some ways, such a comparison would be only skin deep. The energy of David Mogo is entirely different from say Lagoon. Okungbowa approaches the novel with a casualness of language that belies how immaculately it is put together. It takes a specific kind of talent to make the narrative feel this easy. Whereas Okorafor’s language has a completely different movement to it, it reads like each word is selected, polished and perfected. David Mogo reads with an effortless casualness. Both have a beauty, but they are different to be immersed in. 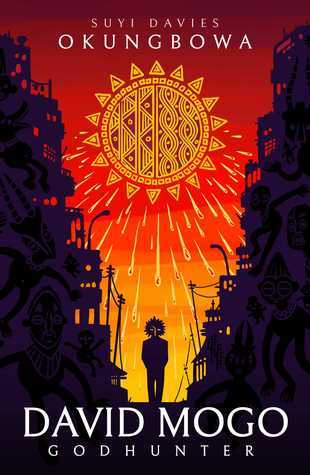 While we know from the start that David’s mother is a god and his father a human, David’s ” half ness” is never internalized by him. He maintains he is a full being, not half of anything. This structure means that the plot avoids any basic “half-breed” tropes. Those who expect him to be “half” are quickly set right by his capability to be fully both. David uses his god abilities and his human understanding to protect the humans around him from the gods, who’s ways and means are inscrutable at the beginning.

The story progresses and the reasons behind the appearance of the gods become clear. Importantly, while the people don’t necessarily know this, the gods are as powerless to return home as any human refugee. David finds himself in the employment of a human wizard who looks to harness the power of the gods for his own ends. When those ends are revealed to be nefarious, David switches sides and swears to bring the evil wizard down. This promise, and his attempts to protect the humans around him, leads him to deeper connections with the gods, and to the unpredictable powers he has. The story is filled with magic of all kinds — herbs, warded circles, magical amulets, spells, and prayers all figure in the plot. There is also a healthy amount of mythology, which is treated at times as utterly historic, other times it is revealed to be a complete fantasy. The book really keeps you on your toes as the reader can’t assume that any of it is all powerful or foolproof.

David is accompanied by his foster grandfather, Papa Udi, then collects other allies, the twin gods Kehinde and Taiwo, a silent teen bride named Fati, and later other gods and mortals. The group faces progressively stronger foes, a wizard, a wizard inhabited by a god, then a god in his full glory. Initially, David protects the humans because he can and because it makes money. As the story progresses, his fight becomes more imperative, as the city of Lagos becomes more fractured and destroyed. What starts out as ” a bad job” becomes life and death for him and his beloved city.

Finding home is the central theme of the book. The humans and the gods both fight for home, for what “home” means, and how they can build one. This raises a question: Can beings of different origins come to share a home?

A complex and interesting thing happens with the women characters in the book. In the first section of the book, women are only spoken about by Ajouli, the wizard. In his view, they are wives or tools, not peers. David is pretty unconcerned with them. His silence on the matter seems to let the stereotyping stand. However, in the second section, more women enter the plot and start to exert a strong presence in the narrative. They have their own opinions and actions and drive their own needs. To David, they are to be protected, but the women clearly don’t see themselves that way and don’t behave that way at all. Then by the third section, David is sharing his heroics equally with the women in the book, including two experienced soldiers who lead the militarized human resistance. (The also become a lesbian couple, in a super cute series of scenes.) The journey of the women from invisibility to prominence is quite effective both as a description of how we are treated in real life and in how David’s perception of them evolves.

Other themes in the novel revolve around violence and the human perchance for it. David, due to his parentage, is said to be surrounded always by chaos and destruction. However, contrary to his bloodlines, he seems to avoid the loneliness that would go with this destiny. He is both a creature of war and something larger. In the end, that’s as his mother intended.

David Mogo, Godhunter wraps all the action, humor, and thought in a wry, cynical style that while utterly Nigerian, is also fundamentally urban. The same way that New Yorkers talk about taxis, or San Franciscans complain about the price of housing, Lagosians love their city even as they know every flaw and fault. The love of the city flows through this book and is sure to ring true with lovers of Urban Fantasy. Along with that, the strong main character fighting magical evils fits right into this genre.

An adventure of literally cosmic proportions, the book remains tightly focused on one man, one group, one personal story. The big picture implications remain implications. We never explore what is happening in other countries, or even other places in Nigeria. Do different pantheons fall to earth where they were once worshiped? The possibilities are intriguing.