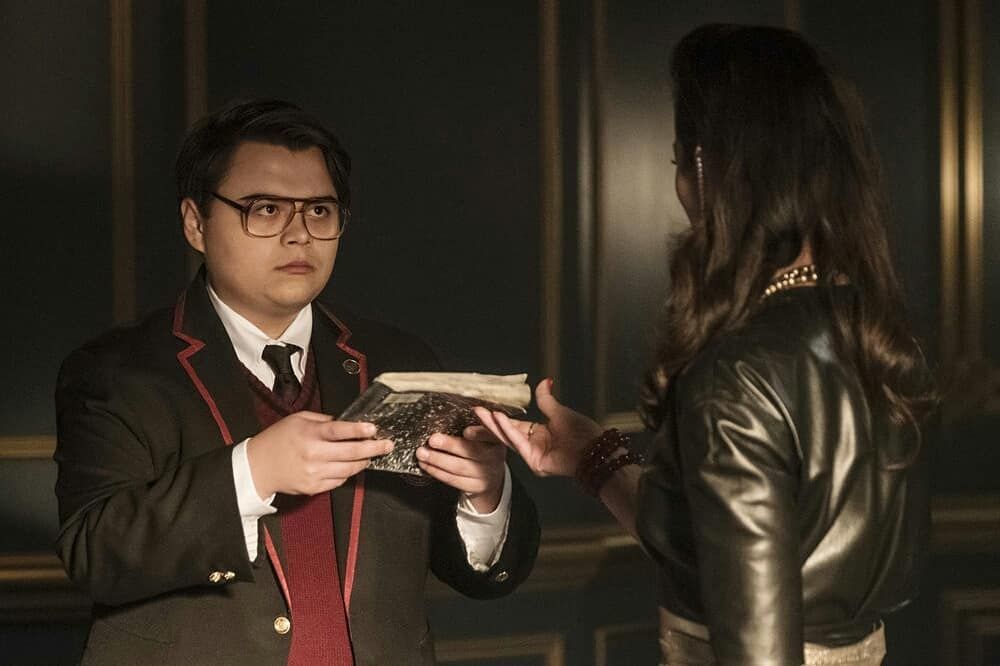 The tension is brewing between Saya and Maria now that Yukio has been killed. Filled with petty, Maria tells Marcus that she offed Saya’s boy, and Marcus opens her eyes to the fact that they would want the one at the top. They’re gonna come for Saya. Everybody in school is buzzing about who did it, and when Maria tries to smooth things over, her homeboy Juan aka Chico 2.0 attacks Sia and tries to marker out swiftly. Master Lin responds by putting King’s Dominion on lockdown.

Maria is locked up with Juan and Brandy. They spit venom at each other in Spanish while Brandy throws in jabs just to fuck with them. Brandy gets in Maria’s head and makes her think that Saya might retaliate for the arrow shot. She’s smarter than that though and writes a note to Marcus that she wants a truce. The note doesn’t get to him though, so Juan prepares Maria for war.

Marcus, Viktor, and Willie are stuck in a room, and Marcus just wants his two love interests to make peace. Maria’s peace note is slid under the door, but Viktor grabs it and eats it because Marcus was talking shit earlier. Marcus sneaks out of his room to try and speak to Saya, but Lin cracked him over the head before he can say anything.

Billy, Lex, and Petra are together and both boys make passes at Petra, but Petra passes on both of those chumps. Lex goes back to sniffing glue, and that’s when we get his fucked up and guilt-ridden backstory. He and his brothers used to take his dad’s dock access card to steal from the shipping containers until one day they got caught, killed a security guard, and Lex dropped the ID card. Dad got locked up and took the rap, and now he’s living this life. Petra proposes a threesome, and the boys look at each other like they were in a dream. They struggle to get right into it and lose out on the experience that their forty-year-old selves will hate because the lockdown gets lifted in Petra bounces to eat some grub.

Saya is caught up with Shabnam and her clan mate Riku. Shabnam is stirring up the pot while homegirl is pissed at Saya for not wanting to Avenge Yukio’s death. They prepare for blood to be spilled in the cafeteria.

At lunch, Saya and Maria duke it out. The girls are sliced up, food is scattered, the other students are watching with all the hype while they’re at each other’s throat. Master Gao pulls up and stops them saying that Maria is the poison coursing through King’s Dominion. Gao tells Maria she plans to remedy the cancer by cutting it out, and they take her away. Riku and Gao exchange a strange look in the hallway, and I’m wondering if Maria has been set up…

Lin interrogates that boy in a deep, dark dungeon. The interrogation is severe, then Lin whips out the family footage from Marcus’s childhood, asks him some questions, and figures out his tell. Marcus spills the beans, and Lin realizes how deep this shit goes. Master Lin goes to Diablo spewing lies and says Yukio was a drug addict who was in too steep. When Chico went to go collect, Yukio murdered him. Diablo says Lin will know his pain, eventually, and the foreshadowing is real.

Riku enters the dungeon that Maria is being kept at and gets ready to kill her until Saya walks in. Riku and Saya duke it out, and Saya beats the brakes off that girl and forces her to run. Riku tells her she picked the wrong side. You’d think that Saya and Maria would have hugged it out and became best friends after that, but they left on rocky terms.