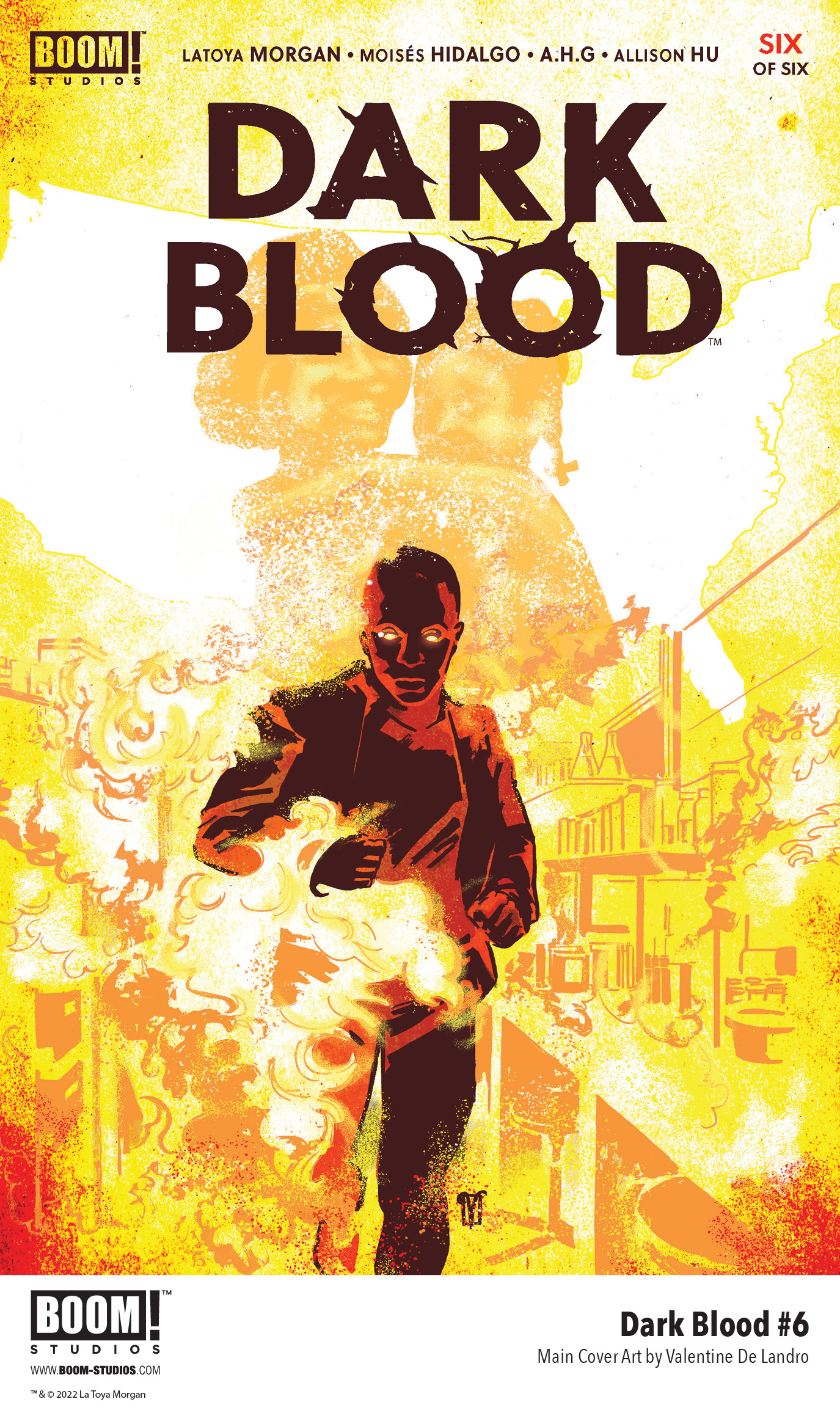 BOOM! Studios has given us the honor at providing a first look at Dark Blood #6, the final issue of an evocative six-issue original series from screenwriter LaToya Morgan (AMC’s The Walking Dead, Into The Badlands), rising star artist Moisés Hidalgo (Mighty Morphin Power Rangers), colorists A.H.G. and Allison Hu, and letterer AndWorld Design. The series features a young man forging a brave new future for himself and his family while dealing with his past, and it’s available in January 2022.

When his family is held captive, Avery must use his newfound superpowers and military training to mount a daring rescue to save his wife and baby girl from the facility where everything began. But freeing his loved ones won’t be enough, and ensuring that no one else ever goes through what he has may cost him everything…

In writer LaToya Morgan’s own words “Dark Blood is a gripping, genre-bending sci-fi thriller inspired by real historical events. Our Hero, Avery Aldridge, is a young Black man with unexpected powers that lead him to people and places that I hope keeps the reader on the edge of their seats.”

Dark Blood is the newest release from BOOM! Studios’ eponymous imprint, home to critically acclaimed original series, including BRZRKR by Keanu Reeves, Matt Kindt, and Ron Garney; We Only Find Them When They’re Dead by Al Ewing and Simone Di Meo; Seven Secrets by Tom Taylor and Daniele Di Nicuolo; Something is Killing the Children by James Tynion IV and Werther Dell’Edera; Once & Future by Kieron Gillen and Dan Mora; Proctor Valley Road by Grant Morrison, Alex Child, and Naomi Franquiz; The Many Deaths of Laila Starr by Ram V and Filipe Andrade; and Eve by Victor LaValle and Jo Mi-Gyeong. The imprint also publishes popular licensed properties, including Dune: House Atreides from Brian Herbert, Kevin J. Anderson, and Dev Pramanik; Mighty Morphin and Power Rangers from Ryan Parrott, Marco Renna, and Francesco Mortarino; and Magic from Jed McKay and Ig Guara.

Print copies of Dark Blood #6 will be available for sale on January 26, 2021 exclusively at local comic book shops (use comicshoplocator.com to find the nearest one) or at the BOOM! Studios webstore. Digital copies can be purchased from content providers, including comiXology, iBooks, Google Play, and Kindle. Fans and readers can purchase copies of Dark Blood SC, collecting the entire six-issue series, in local comic shops on June 8, 2022 and in bookstores everywhere on June 14, 2022.

For continuing news on Dark Blood and more from BOOM!, stay tuned to www.boom-studios.com and follow @boomstudios on Twitter.