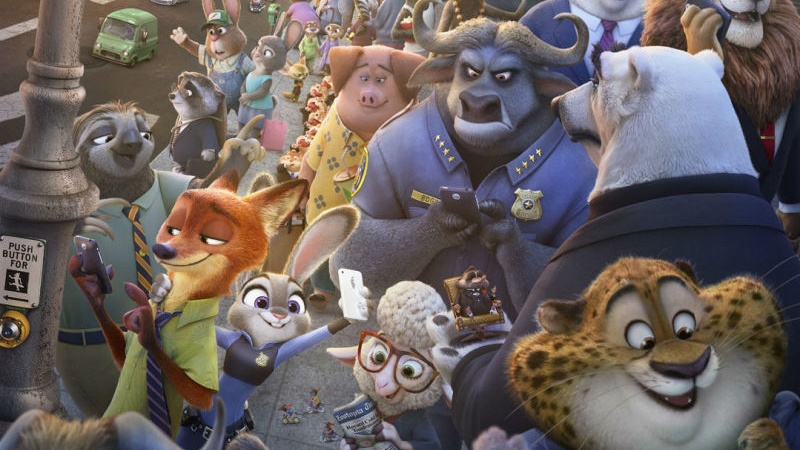 Fear. Treachery. Bloodlust. The three words that start the Disney-Pixar’s newest film tell a story of how the world used to be when it was segregated into two categories, predators and prey, up until modernization and intelligence brought a new frontier of peace and harmony. That’s right, of everything we expected this movie to be – a spritely bunny who would prove her naysayers wrong by becoming a cop – Zootopia is actually a thinly-veiled look at diversity… and it’s glorious.

If you expected the cute-underdog-cop tale you weren’t wrong by any means, only Zootopia is unexpectedly more. Zootopia uses the “chase your dreams” theme almost as a bait-and-switch to hit you over the head with a message that’s still strikingly relevant today: even for the well-intentioned (especially for the well-intentioned), diversity is hard.

The movie follows Judy Hopps (voiced by Ginnifer Goodwin) as the intrepid daughter of carrot farmers who live out in the country. She’s a cute bunny (but don’t call her cute — it’s okay when one bunny calls another bunny cute, but… you get the idea), but to the terror of her loving, overbearing parents, Judy doesn’t want to take the traditional rabbit job of becoming a carrot farmer, but instead wants to become a cop in the big city of Zootopia. There’s never been a rabbit cop before, as she’s constantly reminded, but Judy sets out to prove that it can be done, and that she can do whatever she sets her mind to do.

Judy reaches Zootopia – concrete jungle where dreams are made, where there’s nothing you can’t do – and lives the experience of every new transplant who moves to the city to “make it.” Move into a tiny apartment? Check. Live next to crazy Craigslist neighbors? Check. Watch your naiveté taken advantage of by swindlers? Check, check, check. And then your friends or parents call to ask how’s the big city, and you think about the ringer you’ve been put through, and feel overwhelmed and out of your element, and you tell them, with all the confidence you can muster, that you love it. And then, of course, you go on the adventure that turns your lie into the truth.

With its pop culture Easter eggs covering every decade from The Godfather to Frozen, and clever adult jokes that would be inappropriate if kids only understood, Zootopia is both hilarious and endearing for a movie with such heavy-handed messages; messages that surprisingly tackle rather sensitive issues of prejudice and, basically, white privilege and liberal guilt. Zootopia has all the ingredients: a hidden class system under a seemingly progressive society, an event that brings secret prejudices into public view, and a police precinct and government with an inflated sense of control over it all. And of course, even with their best intentions, they sometimes manage to do more harm than good – even our progressive non-predator bunny.

The movie was pleasantly obvious in its messages in favor of diversity and against stereotypes and discrimination. I say pleasantly obvious because having layers is part of what I enjoy in animated films; the best ones have subtler meanings to be uncovered, but they’re only hard to find when hiding under the obvious moral for kids, waving its hands in front of you and screaming “look at me!” It’s moral subterfuge, and animated films do it better than most by necessity of speaking to both 5-year-old kids and their 35-year-old parents. I was most curious — skeptical, to be honest — how Zootopia‘s message would portray the police when the dust would settle. There’s an obvious weight to Zootopia’s themes given today’s political and social climates, which is assumingly why they chose to address them, but would they take an obvious position or craftily walk a line as Judy does everything she can to become a cop? They would inevitably, I thought, piss somebody off. I won’t dive into details for risk of spoiling the film, yet suffice it to say Zootopia walked the line and, in this writer’s opinion, walked it well. And with all its social commentary, Zootopia is freaking funny.