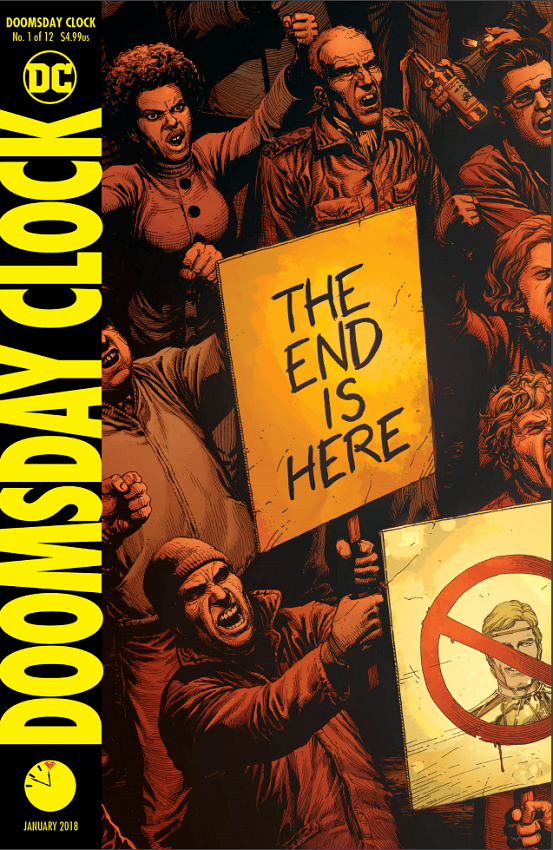 One of the most undisputed statements is that Allan Moore’s The Watchmen is one of the best limited runs or graphic novels in history. Outside of the prequels that weren’t all that great and one of the most polarizing comics adaptations to a movie ever created, most of what folks know of The Watchmen is that it was a masterpiece. Both tapping into a uniqueness in its themes and storytelling, it is one of the cornerstones that comic book fans hold dear with an edged loyalty. When the lead-ins to DC’s Rebirth culminated with Batman discovering the infamous Button, it signaled a return to The Watchmen in some shape or form. 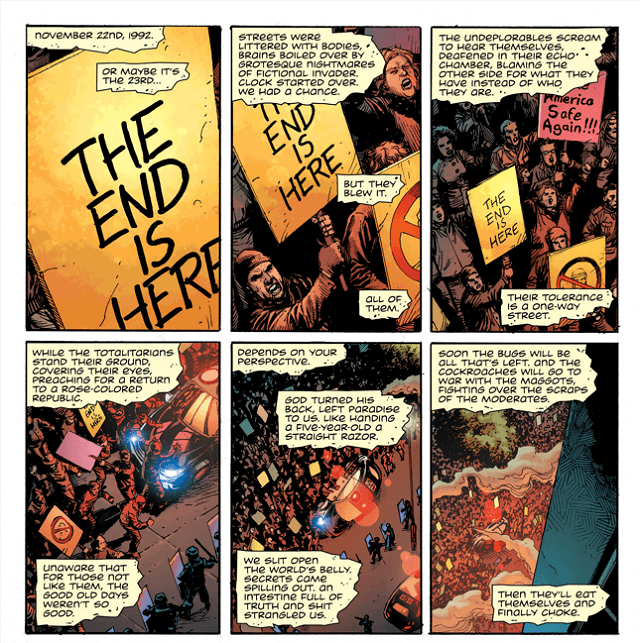 While the original Watchmen series took place in an alternate world from any other heroes, the challenge is how they will fit within the DC universe and what their re-introduction triggers for our existing heroes. How this will work is only briefly hinted upon in the first issue of Doomsday Clock #1, where a few old heroes from the vigilante Watchmen take center stage. The world is falling into chaos. Johns and Frank build a palpable end-of-world scenario, part based upon the natural progression of worst case society scenarios. Some the result of what the revelations of the Watchmen have left in their wake. Johns has spoken about how this was a more personal story for him and Frank and it shows. There is a lot of political commentary, though scattered and unfocused with intention.

As chaos spreads, the creators use fragmented news reports or broadcasts to show the scope of estrangement. We’re not getting a direct link into their political or social beliefs specifically, but we are getting insight into what hits their radar: references to our current administration, rising cynicism, dare I say doomsday scenarios. It’s all there and ripe for a Watchmen-type story. I’m not sure if it will rise to levels of “Fox News hates the new Captain America” levels, but it may raise an eyebrow or two, considering Johns doesn’t do this often.

As for the story itself, it’s a tightly woven character movement that sees some old characters come back in surprising ways. It carries a familiarity to it, which might be the most important element of this book. The Watchmen excelled in tone in addition to everything else, so nailing that had to be a requirement. This much is accomplished, giving us some personalities that open the story like it hadn’t been years without a Watchmen book. For Frank’s part, there’s a deliberate homage from style and lineage present. The 9-panel page layout was a staple of the original book and you can see its effectiveness here. 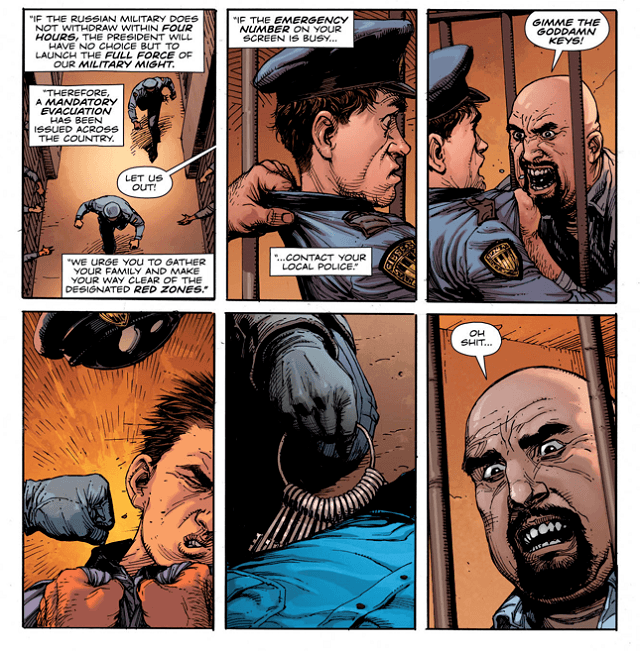 Not much of the story has been revealed yet, but so far, the creative team has laid out an intriguing and beautifully rendered opening. Not only do Johns and Frank need to craft a good story, they have the pressure of bringing character back into prominence for the first time since they were part of the best graphic novel of all time. We will see how this ends up stacking up to that, but so far, they haven’t given any reason as to why this couldn’t be a damn good book.