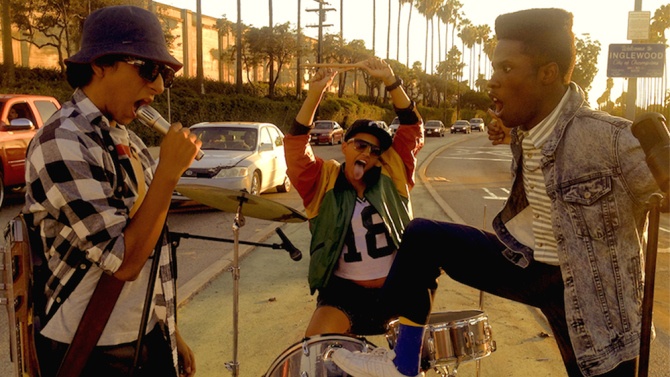 I think it’s important that I state off the bat that the movie Dope is not, I repeat, IS NOT “Dear White People.” There, you can rest easy for the rest of the review now.

I saw this movie opening day with my friend Sergio and the diversity of the audience in the theater was welcoming (although the old white people there surprised me a bit), but seeing so many black folk and people of color packed in for this movie gave this comforting feeling that this film’s atmosphere would be so black. Maaaaaaaaaaaaaaaaaaaaaaaaan, Dope delivered with interest.

The film centers around high-school seniors Malcolm Adekanbi (Shameik Moore) and friends Diggy (Kiersey Clemons) and Jib (Tony Revolori). We get the run down that they’re big into 90’s hip-hop and fashion, and things that would be qualified as white shit — things like “punk rock, skateboards, comic-books, and Donald Glover”, meaning they got that nerd stamp on them hard. The neighborhood is Inglewood, California, aka “The Bottoms,” [quote_right]we see the use of hood politics to cover geopolitics[/quote_right]and we see getting your kicks or your bike ran might be considered a good day considering how losing your life can happen instantly. We’re introduced to the woman of Malcolm’s affection, Nakia (Zoë Kravitz), and when he gets an invite to Dom’s (A$AP Rocky) party the norms of his life become a whole ‘nother monster.

Malcolm Adekanbi is the fanboy’s Everyman (Everyfanboy?) — this guy is easily Kamala Khan or Miles Morales in the flesh. Shameik Moore does a brilliant job of being the soft spoken, intellectual character that knows his place then discovers when to step out and above that place. We watch this Nigerian kid who gets the best grades and is applying for the top Ivy League college go from being an addition to his environment, into a survival mode that requires him to use the attributes given him by essence of being a product of that environment. Those parallels are part of what make Dope such an incredible movie.

Dope is the millennial’s Friday and the Blerd’s Revenge of The Nerds. Where Top 5 was the last movie that was unapologetically Black as fuck, Dope separates itself in terms of being geared towards a younger audience. We see things like the use of hood politics to cover geopolitics as Dom discusses drone strikes in the Middle East with his business associate. Dom also fact-checks Malcolm (acutely) on his hip-hop knowledge. A$Ap Rocky was perfect for this character and represented him not as the “bad guy,” because he wasn’t — he’s just a dude that can talk civil with you and just as soon punch you square in the face if feeling disrespected.

There’s a lot more action, as well as heavy commentary on race, gender, slang, the-N-word, and social media. Dope truly broke the mold by taking social media and incorporating it throughout the movie beautifully. We see straight up hood dudes using Google Maps to locate folks; we see a hashtag (#Lilly/#HowAmISupposedToEatMyPoundCake) come to life via social media outlets like Twitter, YouTube, and Vine; we see people throwing remixes on them and dubbing over the videos. One of the best portions of the movie is how the cinematography and social media streams become one via random cuts, video edits, and music as a key element throughout the film. The unique visuals of this film come at key points and are just as unique as the film itself.

Dope isn’t all laughs, and there were so many serious turns that brought you back to the realty of the situation that Malcolm found himself and his friends in. This film is truly a roller coaster, especially with the character development, which is what keeps you so invested.

There ain’t much more I can say aside from go check this shit out. This is a movie you are going to download, watch it, then say, “Nah, lememe go buy this shit legit cause it was that good.” When the last time you bought a DVD, homie? Exactly. When Dope hits that Blu-ray, it’s going to be that good you’ll want an actual physical copy. But you should see it in theaters first because it’s even better with a room full of people.