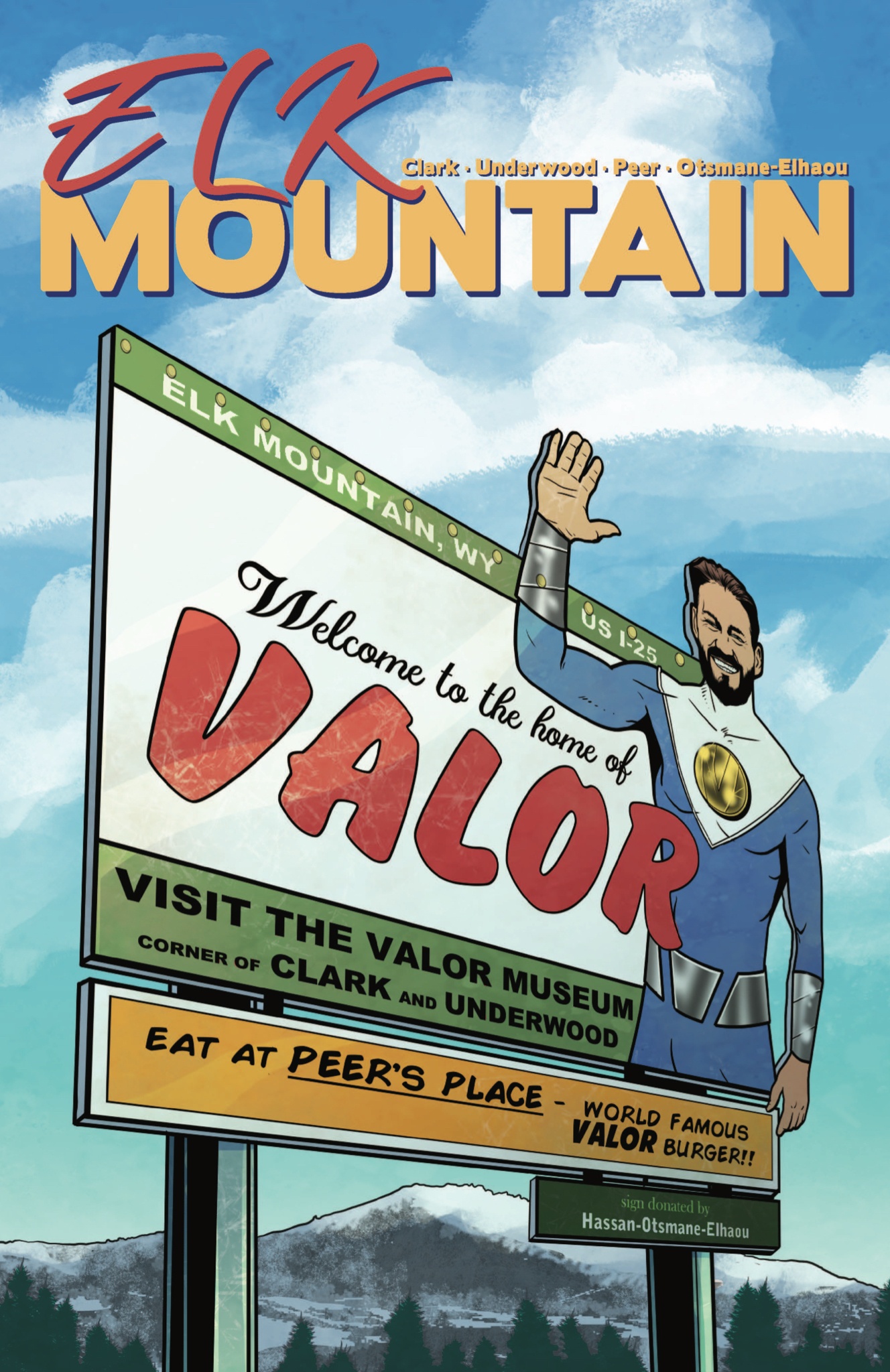 It’s not often that we see our superheroes take a position on real-world issues. More than anything, because of the escapist nature of comic books, we don’t expect them to. Sure, there have been plenty of stories where writers have their characters handle problems and save the day from situations similar to the ones we deal with but less often it’s something direct. Some of the best comics are brave enough to tell a story where they explore how our heroes tackle real-world problems or “politics” as some like to call it and the impact someone in a position of power can have. Elk Mountain by writer Jordan Clark and artist Vince Underwood is one of those stories.

Parallels. Parallels as Far as the Eye Can See

Elk Mountain: Part 1 definitely wears its influences on its sleeve. We follow Valor, a man who crashes on Earth as a baby and is raised by a small-town couple, using his extraordinary god-like powers to save the day. Sound familiar? No? C’mon, it’s a Superman story people. The only difference between Valor and Superman is that his parents are immigrants from Panama and his identity is well known among his community. A small but poignant change that is obviously influenced by the book’s major themes. Everything else, from Valor’s powers and enemies to his influence on the people of his hometown in Elk Mountain, mimics Superman to the letter. Writer Jordan Clark doesn’t shy away from this fact, and it’s because of this familiarity that Elk Mountain is not only Superman story but one that is well done. 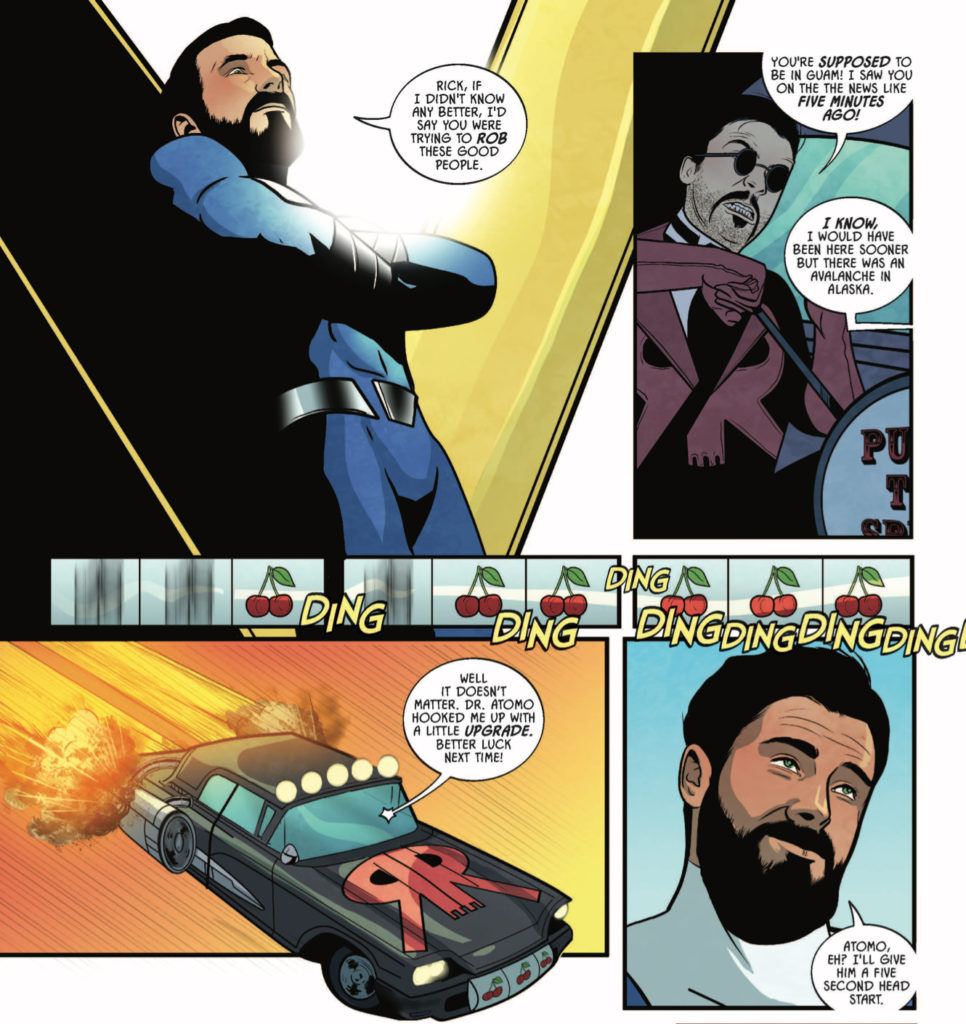 Think of Valor as Superman injected with a bit of reality. In between saving folks from natural disasters and stopping bank robberies, he also takes a firm stance on immigration. You’ll see him helping set up his hometown as a sanctuary city while, at the same time, saving children from detention centers. He’s got clear views on the President and even has that one family member who sported that MAGA hat in 2016. Rather than staying neutral on political issues, he takes a clear side and uses his position of power to do his part and make a change. That everyman quality makes him a lot more relatable as a down-to-earth type of man despite the fact that he can lift mountains and travel across the world in a span of minutes. 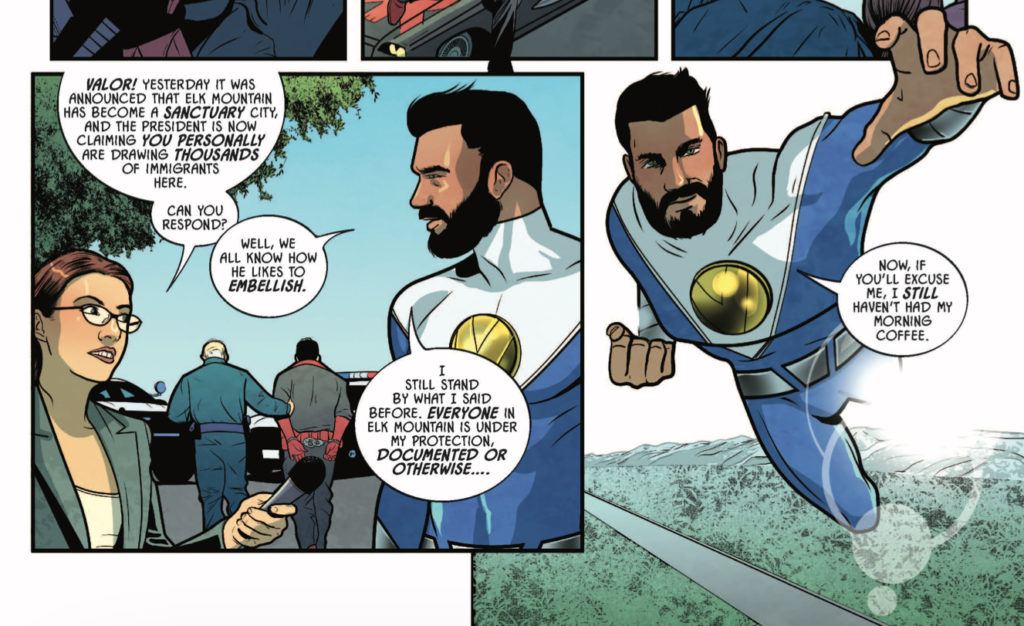 America’s contentious relationship with immigration isn’t just used as a minor plot point either. It’s the focal point of the story where characters realize the importance of why Valor was fighting so hard on this issue. During the second half of Elk Mountain, the book shifts from a “World’s Greatest Hero” story to a “World Without Valor” one.  Much like “The Death of Superman,” story arc, it’s here that we truly see the consequences of Valor’s disappearance. Crime rises and supervillains take advantage while the small town of Elk Mountain is thrown into chaos. 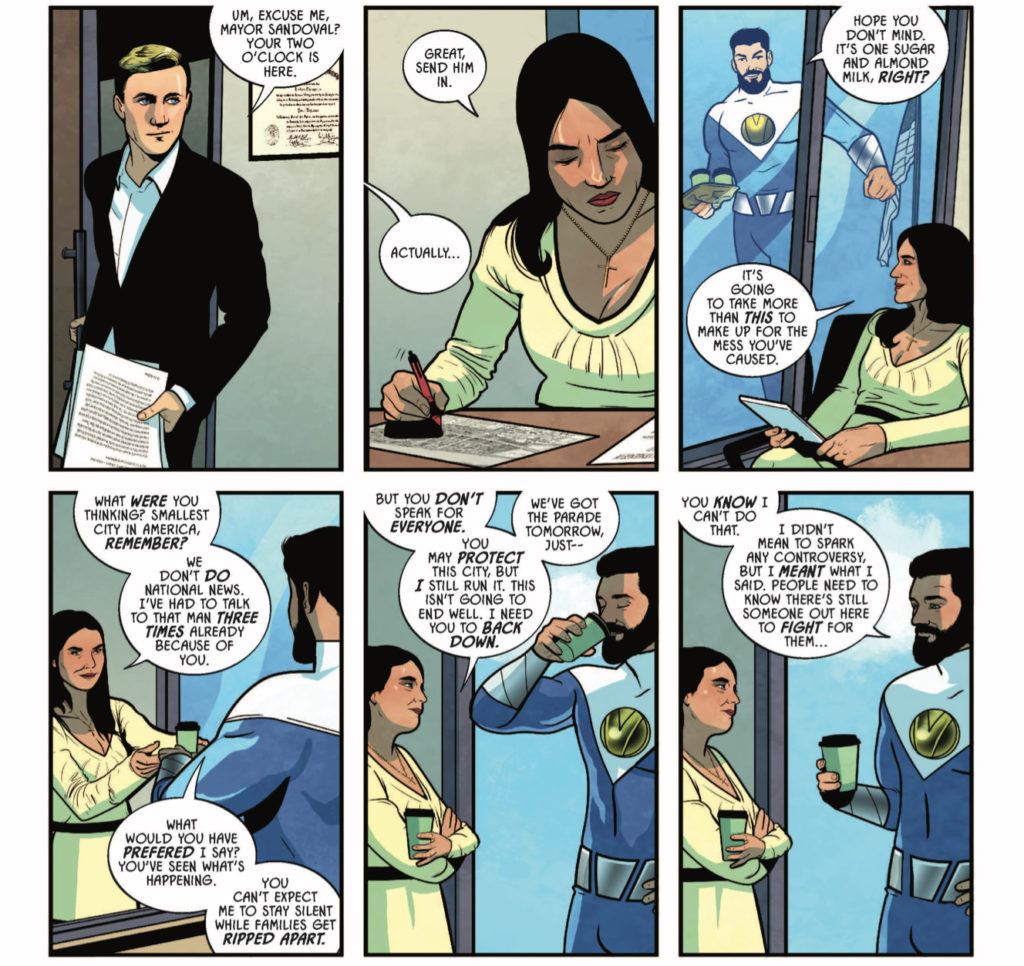 However, the biggest differences between those two stories are the heroes who rise up and the issues that arise. There are no superpowered individuals to try and take Valor’s place, just the citizens of Elk Mountain. In Valor’s absence, writer Jordan Clark shows us how a hero, or just simply a person, with power can set an example to fight against injustice, no matter the odds. Considering his actions earlier in the issue, characters end up having to take on Valor’s responsibilities, like the illegal immigrants he chose to give shelter. One critique of this part of the book is that a lot of time is spent focused on the villains rather than seeing the pressure of real-world antagonists like the government and the organizations who work to make life harder for immigrants trying to find a safe haven. It’s a minor complaint but something I hope gets addressed in part 2.

Saying Something Worth a Damn

Elk Mountain is great for plenty of reasons. The fun art by Vince Underwood has a weird but endearing mix: a comic book art style with uncanny realism. Honestly, the art is very reminiscent of the TV show Archer, just without the parody. It’s a style that fits the book really well. There’s also the well-written characters who feel like people you would meet in real life. Valor himself is one of my favorites, as his charm, personality, and good intentions make him so likable. However, the best part is writer Jordan Clark’s ability to use traits from classic superheroes to connect with readers. That hope, optimism, and the idea of being a good person is the crux of any tale featuring a “Super Man,” as well as the inspiration that comes from those lessons. 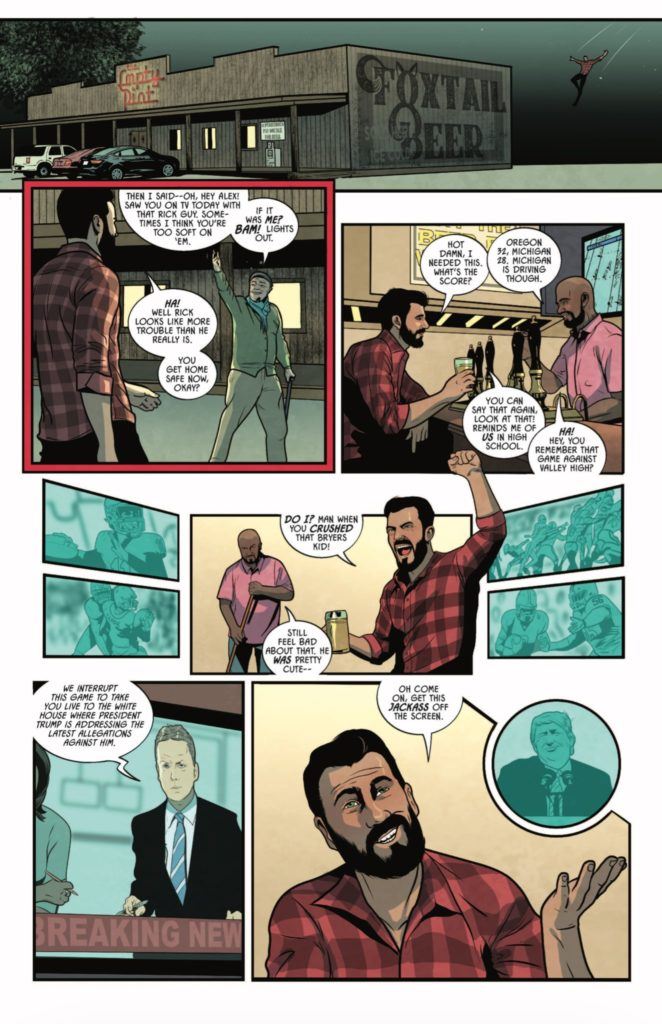 Elk Mountain: Part 1 makes a statement about an issue that we relate to, specifically with the process and actions of America’s dealings with immigrants. More importantly, it makes a strong case for why fighting against the way we do things is the right thing. Valor is a hero with heart and who, like Superman, fights for those who can’t. He’s also a hero that stands for accountability. Instead of doing nothing in moments deemed divisive, he acts. And when something of authority or influence does something substantial, it means something. I look forward to how Elk Mountain ends, seeing how the people of Elk Mountain fight on their own, and what more Jordan Clark and his team have to say about our current state of affairs.

If you’re looking to grab a digital copy, you can get yours here!

Writer Jordan Clark’s previous work includes titles like Bitch Planet Triple Feature #2, Duality, The Black Experience, Still Not Equal, Obeah, and BFF. You can check him out on his Twitter page.

Meanwhile, artist Vince Underwood has worked on and written his own book Page Turn, while doing covers for other titles like Hive Mind and Kane Maverick. You can see more of his art on his website.