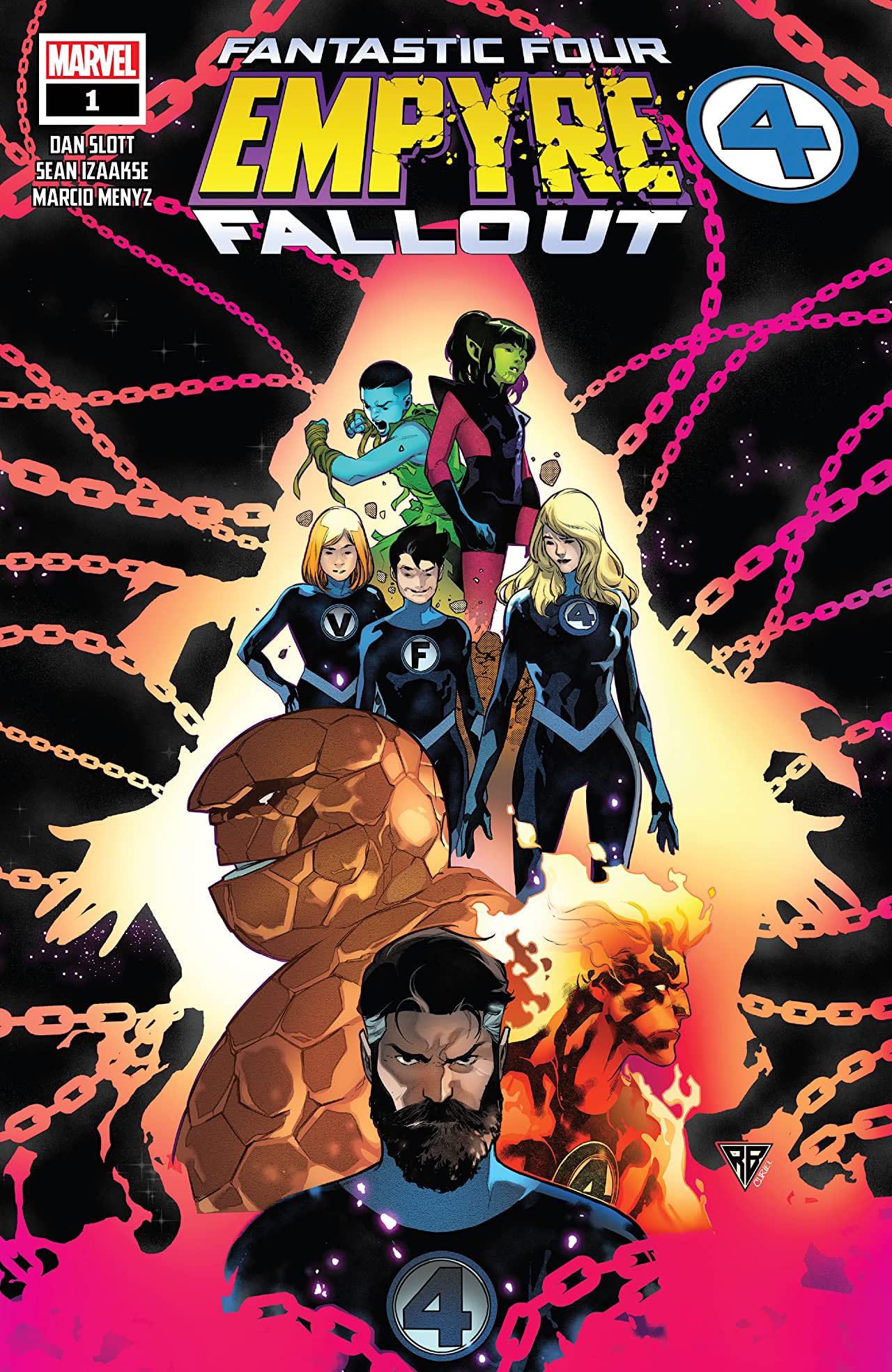 Endings are hard. They always will be, especially for an event that has had as much good momentum as Empyre has. Last week’s Empyre #6 brought us the final showdown between the Cotati and the Kree/Skrull/Earth alliance. A battle fought on three fronts – the Kree/Skrull alliance ship, in Wakanda, and on the streets of New York. As usual, our heroes overcome all odds to save Earth and defeat the Cotati. There are some cool moments like She-Hulk’s immortality kicking in and Mr. Fantastic in an Iron Man armor, but it ultimately wraps up in a nice neat bow that feels too expected … or so I thought.

Enter Empyre: Fallout Fantastic Four #1 and Empyre: Aftermath Avengers #1. Now, the Avenger issue of this epilogue has some great stuff. A space wedding, broken bonds, and the tease of the Kree/Skrull Alliance’s future. However, it’s this Fantastic Four issue that feels like it has bigger implications for the Marvel Universe and some really good old fashion wholesome content.

Let’s get the big stuff out of the way first. We get a great resolution on two fronts. Comics aren’t like movies, the bad guys tend to stick around. Quoi and the Cotati weren’t just to give up easily and it’s understandable. Hate begets hate and the Cotati have a reason to be angry and still want revenge. Normally, bad guys are left lingering to lick their wounds after events like this. Dan Slott does a great job of having our heroes recognize that the Cotati were pretty damn justified in their attack on Earth and the Kree/Skrull alliance. They work right towards making amends to the Cotati and healing their pain.

On the Kree/Skrull side of this issue, the heavy focus is on the children Jo-Venn and N’Kalla. We don’t get to see much of them in the main event aside from the last issues of the Fantastic Four. What I like about how these two characters are handled is that they are presented as the future of their races, even more than Hulkling is. They are the perfect example of unification between the Kree and Skrull and it’s a pretty big moment when the heroes stand up to protect that and give these two a family. It’s the Fantastic Four after all.

Aside from some great character moments, this event does a lot of foreshadowing. It wouldn’t be a comic book event after all without teasing what’s next. While there isn’t much action, Sean Isaaske sets the right atmosphere to match the story.  The Unseen lurks in the shadows again and does much more than be the Watcher’s substitute. There is also the matter of who supplied the Cotati army with advanced weapons, which is a plot thread that kind of comes out of nowhere. None of the books ever seemed to touch on this either. Either way, Empyre: Fallout Fantastic Four #1 is the better of the two epilogues.