Call me skeptical but I was expecting so expecting a cliffhanger on super tease mode that my eye rolling could’ve caused eclipse levels of shade. But I’m glad to admit I was dead wrong. We got everything folks. We got death, destruction, depression, love, deceit, and alllll that Time Travel fuckery that has plagued Barry every step of his hero way.

Can I Get A Montage?!

This episode starts off foreshadowing the inevitable with each member of Team Flash looking off into the distance. Looking into the essence of their being. Looking back on missed opportunities. Looking like the saddest sack of heroes DC done ever seen! Like on some real shit, y’all just sitting around contemplating how horrific it’s about to get for Iris? Joe and Wally just huggin’ on some ‘let’s remember the good times’ shit? 24 hours until her fade appointment and ya not gonna call up Jack Bauer or some shit!? At least Cisco hit up Felicity for the Pippen assist, but her text proves they’re not making any progress. HR and Tracy are trying to make moves on the Speed Force Bazooka. Back at the Caramel Love Nest, Barry and Iris look into each other’s eyes like Robb looked into the eyes of that Non-Frey ass girl, so Iris knows what must be done. Real World confessional time! More on that later.

ARGUS: Cisco and Barry meet Lyla (Diggle’s wife from Arrow and the new head of ARGUS) to ask for the help obtaining all them terajoules of energy to power their Speed Force trap. One problem. WE DON’T BELIEVE YOU, YOU NEED MORE PEOPLE! Lyla doesn’t trust Barry with the power obtained from the Dominator’s attack on C-City during the Invasion! Crossover episodes. Can you blame her?

S.T.A.R. Labs: Barry lays out his new plan. “Let’s break into ARGUS, steal the power source and save Iris.” Cisco claps back like, “Look, simpleton, the whole place is laced with a metahuman power dampener and it’s more secure than Fort fuckin Knox. I know people say that in movies all the time, but this that real shit.” Barry like, “OK. Looks like we gotta find ourselves a real ass thief. When was Captain Cold still alive? 189some shit? Iiiight. Bet.” Barry scoops up Snart from the past, cuz he hasn’t learned anything in 3 years and they’re off to ARGUS on that Oceans 11 flow. Joe and Kid Flash take Iris as far away as possible, without telling Barry, cuz you know..Savitar memories. Meanwhile, Savitar just received a Skype call about Barry’s new movements so he’s officially aware they’re recruiting Captain Cold to steal the power source. Killer Frost was like, “Should I go murk them out?” He said, “NA, we Gucci.”

ARGUS: They roll up to ARGUS get to work while dropping a few Easter Eggs and call backs to potential plot holes. Gotta say I was pretty impressed. They use HR’s face and body-swapping device to get past security. The homies basically Drake stroll through a blizzard up in ARGUS, walk past Gorilla Grodd’s cell along with a few other Flash captured Rogues and Barry drops a “Must’ve been where Amanda Waller kept her Suicide Squad” line and I was like, oooohhhhh shhhiieeeeetttttt?!?!? They tying the DCEU in, or just name droppin’?! Then I saw the Cheetah cell and was like, yessss season 4 bout to be lit!! Sidebar: Although I’m glad they acknowledged that they’ve been sitting on the face swapping tech this whole time (and didn’t just dismiss it), it makes me wonder why Berlanti, Kreisberg, Johns and the writing squad didn’t use it more than like twice all season. But I digress, cuz the rest of this episode is STRAIGHT FLAMES.

Barry and Snart get to the cell holding the alien technology that could power the Speed Force Bazooka. Barry and Cisco shook off the Montgomery 3000 security lock on the door that cost 10 mill’ to make but Snart ain’t no half way crook. Homeboy pops that lock open in 37 whole seconds while Cisco cried himself into the fetal position. They bout to go get that tech when King Shark appears as the tech-guard, forcing Barry to make a big decision. Barry, you bout to death ray King Shark into any icy oblivion and show me that you’re one badass Iris saving dude who wouldn’t mind getting a little kill happy or you gonna let me handle this realm of heroism you ain’t never know? Yo Captain Cold may be the smoothest mufucka in the Flash game after this episode. The way this guy carries himself is debonair. His voice is silky smooth and always influencing those around him. His actions are wild and lit AF.

ARGUS: Barry realizes he’s not about this life and give Snart his cold gun back, as he drops Shark Week facts and tosses a cold grenade up into the cell. The temp drops low enough to lull the massive creature to sleep. They snatch the tech out, the alarm sounds and door drops. Only Barry makes it out alive and he is left with another ultimatum. Snart was like, “You gonna leave me here to be eaten alive by this 900 foot shark or be a hero and hold me down?” Barry remembers exactly what he’s about and asks Cisco for help. Cis stops whining about the enormity of this lock and puts in that work. The door opens and they book it as King Shark’s arm is cut off trying to yolk up Captain Cold. It grows back, Titan style, and the guys rejoice then bounce.

One problem. Lyla been peeped you fools and got the hammers drawn. She soft though, so when Barry keeps it a buck and is like, “Yea we stole your tech after you told us we couldn’t have it. I’d do anything to save Iris’ life, so come at me Mrs. Salty about Flashpoint.” She coughs up the Dominator’s technology after explaining she saw that he didn’t leave Snart to die and wishes him luck. Oh, Iris wasn’t enough? Petty. Barry places Captain Cold right back where he got him from and tries not to step on a butterfly on his way back to the present.

S.T.A.R. Labs: Flash zips into the lab and asks where Iris is and bonehead HR immediately spits out that she’s on E-2 just as Savitar was whipping his Darth Flash face around to reveal that those suckers have just been played! AND. YOUR. SECURITY. IS. STILL. DUMPSTER. FIRE. BILE. LIQUID. TRASH!!

Earth 2: Joe and Iris realize the impending doom is getting closer by the hour so they start to reveal some secrets from their childhood and youth. Iris used to sneak out at night to make out with me (hey we can all dream right.).

Joe once used her college savings money for a booze cruise, cuz even the greatest dad on tv slips up in life. It’s real. It’s emotional. It’s the scene that made me think, “Shit, Iris really might die”. AAAANNNDDDDD Savitar shows up to completely dismantle Kid Flash, snap his knee in 47 places and beat dat weak ass attempt to take down the Speed Force GAWD. Iris gives herself up in order to spare the lives of Joe and Harry but Savitar was like, “Oh noooo boo boo, I wasn’t gonna kill them anyway. They gotta watch you die before that can happen. they gotta hold all dat weight. DUECES.” He zooms out of there and the team knows what’s next. 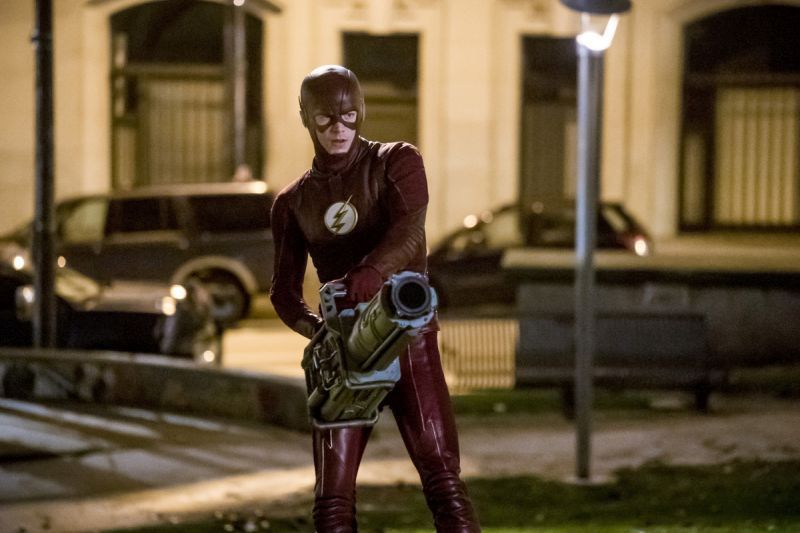 Team Flash suits up, guns up, Vibes up, and shuts up. It’s kill or be killed in these C-City streets and somebody gonna die tonight!! Savitar pulls up with Iris danglin’ like a wash cloth. He basically tells Barry to “Come at me bro.” and Flash unleashes the Speed Force Bazooka on him. Slight problem. He been there and done that so of courseeee he was ready to survive this blast. And how did he do it folks?! MAJOR PLOTHOLE FILLING: The Philosopher’s Stone! That lil old piece of rock that started off this whole season sucked up all that juice and turned that bazooka into a slingshot. Barry looked at the gat like a sad 1-minute man talmbout, “How could you fail me in my most important time of need?” Savitar laughs his way to a 4-foot scythe ripping through Iris’ back and ending this beautiful, black, passionate, Queen of superhero television’s life. Joe’s breakdown is gut wrenching. Barry’s attempt to run and stop him before the blade severs her spinal cord is as dramatic and hurtful as the first time we saw it in the future.

THEN they drop the video that Iris recorded earlier and my Speed Force God I almost lost it! Powerful stuff leading up to the finale.

This Killer Frost vs. Vibe showdown thooooo?!?!? She better come back to the light side. Then again, it’s been a good run for the core members of Team Flash. Eventually, somebody got to catch the RIPs.

Tracy Brand a Team Flash member full time? I can get down with that.

Great job sewing up reasons why we saw what we saw in the future. Wally wasn’t there because his leg is in 2 places. Iris’ ring isn’t on because she gives it to Joe before being kidnapped. The one difference is HR not being on the roof with the rifle and Joe being up there instead. Which leads me to my next point.

Fact Check: The face/body swapping device is called a transmogrifier. This is my guess for how Iris will live. Worthless H.R. refused to let himself be the cause of Iris’ capture and let his own life be taken in her place. Only to be replaced by another Wells from Earth 52 maybe?

This show is nuts and I love it. Amazing episode from top to bottom. Writing, comedy, plugging of plot holes, action, mystery. It was all there. One can only hope they come this hard when the season finale drops next week!