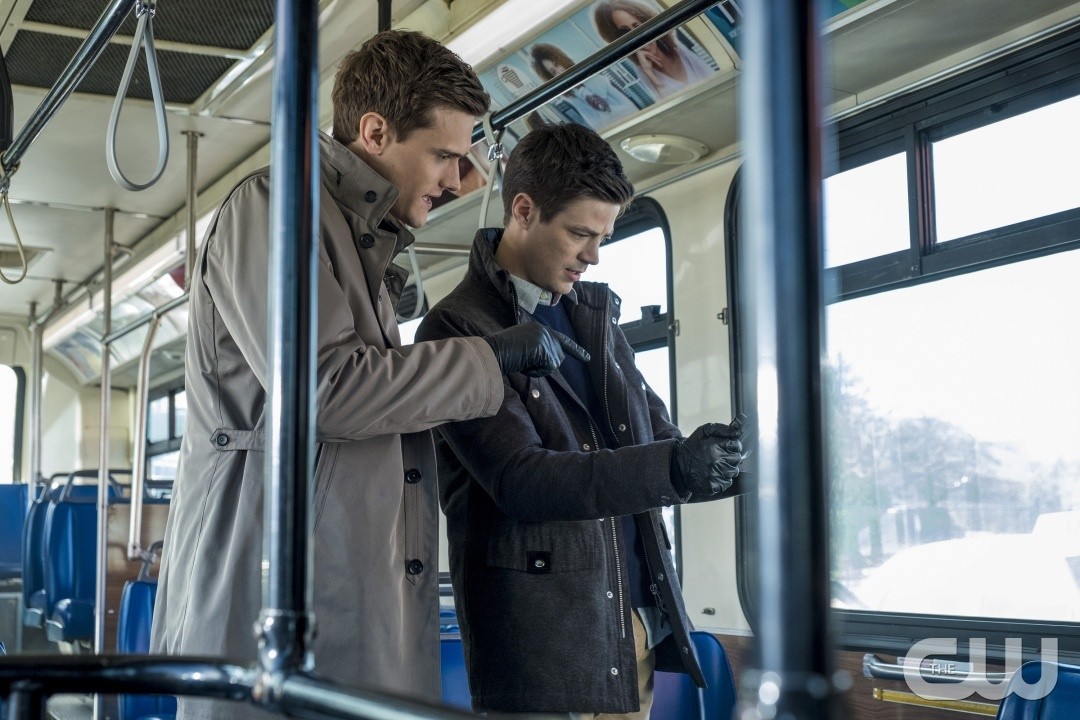 Whoa. What an episode. Was that really just 40+ minutes? Let’s get into it.

Get on the bus

This episode begins with Ralph taking Barry to check out the bus that granted him and those other metas their powers. They’re looking at examining residual dark matter, hoping to track down the last of the metahumans. As they discuss whether or not Harry’s plan might work, it’s clear that Ralph is still terrified of DeVoe but figures that if they can’t outsmart him, they’ll at least be able to put the evil mastermind down for a nice dirt nap. Barry reminds him that as heroes, they don’t have to kill anyone. Ralphie’s not buying it.

As they look for a trace of the missing metas, Ralph notices on their fancy iPad someone he remembers from the day hell broke loose and he got stretchy — it was some weird hippie dude who paid his bus fare that day. But according to the signature they’re seeing on their tablet, that guy seemingly vanished into thin air, or at least he seemed to.

Time to head back to the lab to see what’s up.

Harry’s holding on to what looks like some funky tuning fork which he’s dubbed “The Sonic Scepter.” Though Cisco gives him credit for the assonant name, he and everyone else are skeptical until Harry shows them what it can do with the aid of a paper cutout of DeVoe tied to a chair. This thing, which simulates Izzy’s sonic power, the only thing that has so far hurt DeVoe at all, could potentially destroy him once and for all.

But it’s pretty clear that Harry, while in a much better mood than he’s been in a long time, is also going off the deep end wearing The Thinking Cap. Joe’s hella suspicious and rightfully so.

In the meantime, Caitlin is researching what triggers Killer Frost — epinephrine. She figures a shot of that can bring her out instead of Team Flash having to traumatize her into going all Platinum Snark. Seems Caitlin and Frost are friends now, leaving love notes for each other and shit.

A breaching alarm goes off, and the Fantastic Four Team Flash head out ready to rumble. But what should come through the breach but that hippie dude — looking an awful lot like The Dude, bathrobe and everything. They scare the shit out of him, and into a breach he goes.

Turns out this guy, named Edwin Gauss, has been living off the grid for a while, but now he’s hiding in a pocket dimension like the one DeVoe can enter with the help of his floating chair. That explains why DeVoe wants Gauss — he wouldn’t need his chair anymore. He’d be able to bounce to a pocket dimension whenever he felt like it. (I, too, have always wished I could teleport — seriously, fuck a commute — so I get it.)

Harry insists he can use Cisco’s algorithm to track DeVoe and Gauss’s pocket dimensions to figure out which is which. He’s feeling pretty full of himself these days — his secretly dark matter-infused cap has given him the intellectual confidence he’s been lacking for a while, but he covets that shit like Gollum with the One Ring. Joe starts talking to him the way you’d talk to any addict. Of course, admitting you have a problem is the first step, and Harry’s at Step Zero, maybe even Negative One.

The team heads out to the woods to look for Gauss at what resembles a Rainbow Gathering. You know how some people just look like they smell like patchouli? Yeah, it’s one of those. Everyone there seems to think Gauss is amazing and is enthralled with him, calling him “The Folded Man.” Barry and Ralph set out to look for him and once again, Barry has to try to convince Dibney that murderizing him just isn’t a thing they’re gonna do.

Just then, Edwin comes running towards them with Caitlin in hot pursuit. He’s no speedster, so not so hard to apprehend at this point. Barry tells him they’re not cops, that they’re trying to protect him, but all of a sudden one of DeVoe’s samurai bots appears out of nowhere and shoves his sword through Caitlin. As it self-destructs, it speaks a warning: they’re not going to come between DeVoe and what he wants.

Back at S.T.A.R. Labs, Caitlin’s all “it’s just a flesh wound” and is fully healed nearly immediately. The rest of the team is ready to get back to their plan, but Ralph flashes on them — no pun intended. He’s sick of DeVoe always being at least one step ahead of them, and even with Gauss voluntarily on lockdown in the pipeline, he points out that they’ve been unable to protect the other metas even in a prison. Stretch wants DeVoe bodied, period.

Stretch heads down to the pipeline to eat some Pringles and be mad when he ends up talking to Gauss, or, rather, listening to Gauss have an acid flashback. But it soon becomes obvious that The Folded Man isn’t just drug-addled — he’s describing DeVoe. Somehow, perhaps by accident, his powers have gotten Gauss into his lair before. Ralph wants him to take them back there so that he can finish DeVoe once and for all.

Meanwhile, Cisco is geeking out with a model of the U.S.S. Enterprise when Harry storms in and starts tearing the lab apart — he can’t find his Oxy Thinking Cap. He loses it so completely, he attacks Cisco, believing he’d taken the cap. Joe walks in with it and tells him that his behavior reminds him of Iris’s mother’s and that he should think long and hard about how his use of that hat is affecting the people he loves.

Ralph has snagged the Sonic Scepter and is sneaking around with Gauss trying to find a good place to hop into DeVoe’s pocket dimension when The Flash appears, clued in by motion detectors that Gauss had left the pipeline. But Ralph isn’t backing down from his intention and, grossly, hides the scepter in his own body to keep Barry from taking it and then even tries (and fails) to punch Barry! I mean, he really tries it.

Barry knocks Ralph the fuck out, and when he comes to, he is STILL determined that DeVoe should die, but finally we understand why — it’s not because he’s afraid of what DeVoe might do to him. It’s because he’s afraid of what DeVoe will do to everyone one else — to Team Flash — the only family he has. Man, he really has grown over the course of this season.

Team Flash decides to basically follow Stretch’s plan, minus the killing part, which is unfortunately exactly what DeVoe wants them to do. They have Gauss open a pocket dimension to DeVoe’s lair, and at that precise moment, he and Marlize open one in S.T.A.R. Labs and take over ALL the everything, locking the team in. The bronze goddess Iris, luckily, was prepared for this moment and with an exploding earring, is able to get Joe and herself out the room they’re in. He decides to tackle another samurai bot, and she has a face-off with Marlize. This is, in fact, the fight we’ve been waiting for. Marlize is ruthless with a sword, but Iris yanks out a blaster, and the ladies go at it, trying to prove who would do more for the love of her husband.

Harry tries to jack up the amount of dark matter in his cap, and at this point, I’m kinda like “well, sure,” but he just manages to knock himself out — seemingly. Meanwhile, since Ralph’s been entirely too earnest all episode, he gets to inject some levity into this OMG THIS IS TERRIBLE turn of events — the power DeVoe uses to pursue him? Black Buffalo’s, which means Ralph is once again running away from an angry T-Rex skeleton. (I think I needed that moment. This episode got tense.)

Sadly, the humor is brief, as Ralph comes upon DeVoe, now wearing Gauss’s body and equipped with his power. Izzy’s body lies abandoned nearby with the other bus metas, and yeah, there’s a moment of sadness for Ralph’s lost almost-love, but Stretch ain’t done yet. He pulls out the scepter and blasts DeVoe with a bit of Izzy’s high C, knocking The Thinker on his ass. Ralph then starts monologuing about how just one more blast will kill him and how long he’s wanted to do this…and, DUDE! DO OR DO NOT, THERE IS NO MONOLOGUING. Didn’t you watch The Incredibles?

But before we find out just how badly this is going to go for Stretch, we’re back to the battle of the Real Bosswives of Central City. Maaaan, Iris. Like, I can’t even find the words to describe what a bad mother she is in this episode. Marlize disarms Iris and is about to plunge a katana into her chest, saying, “It seems my love is stronger than yours.” But instead of trying to move out of the way? Iris LEANS IN AND PULLS THE BLADE INTO HERSELF, smacks Marlize’s head against DeVoe’s chair, hisses “Get out of my office,” and presses a button on that chair to send it and Marlize off into a pocket dimension somewhere. SO ILL. I’mma need a Funko POP of Iris West, stat.

The rest of the team comes in right then. Iris insists she’ll be okay, Joe’s managed to behead the samurai bot, and Cisco can’t breach at the moment. So The Flash heads off to find The Thinker.

Now, I almost don’t even want to get into the end of the episode, but we’ve come this far, right?

We last saw Ralph monologuing with DeVoe-as-Gauss. When Barry walks in, he thinks for a moment that Stretch has killed him, but no! He’s just outsmarted him! DeVoe is in cuffs… er, wait. They’re not locked. And now DeVoe is able to hold off The Flash and get his hand onto the top of Ralph’s head. Shit. No.

In short order, DeVoe is easily able to defeat the rest of the team. Most notably, he says one word to Killer Frost when she touches him — “Melt” — and she turns back into Caitlin. DeVoe then takes off into his pocket dimension…wearing Stretch’s body, no chair required.

I have to say… I wasn’t quite sure where we were going with this when Ralph Dibny first joined the squad, but he’s been a great addition. I’m sad to see him go.

There’s more, though. Caitlin asks Cisco and Harry to check her out. All the dark matter in her body is gone, and so is Killer Frost.

Barry goes to clean up Ralph’s office. Iris tries to get him to talk, but right now, he needs to be alone. He has a drink there and promises Ralph he’ll keep everyone else safe.

The DeVoes are celebrating with a bit of bubbly. Ralph’s power means DeVoe’s body will now be immune to the side effects of his ever-expanding brain. (This bit feels a little hokey, but whatever.) It also means that he can now resume his original appearance — Ralph was able to shapeshift. He now looks like the DeVoe that Marlize has always known and loved and that the rest of us hate. And even more so, now.