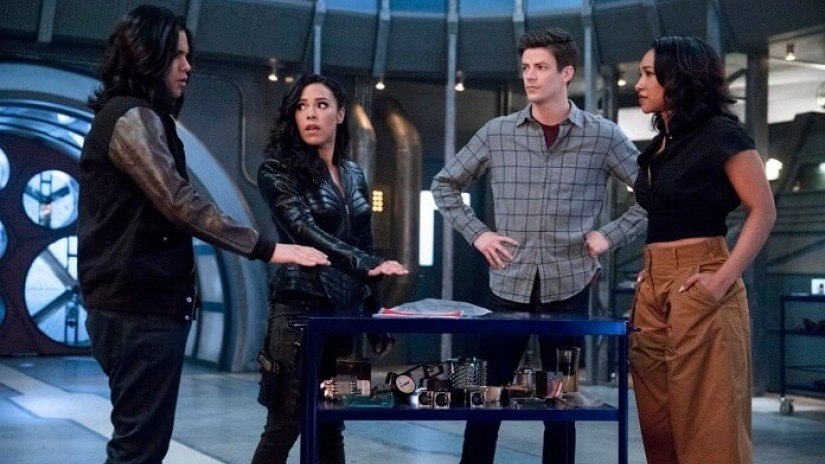 This episode opens with a flashback to eight years prior, with Clifford DeVoe being a condescending pedant at Oxford University, challenging Marlize during a public dialog about the Enlightenment and the value of technology to help humankind. Being, well, DeVoe, he’s a cynic–technology can and will be used in destructive ways; it’s a cancer. I would say he’s projecting, but Facebook.

At S.T.A.R. Labs, Cisco gets hit up via hologram by his breaching sweetie Gypsy–seems her pops is interested in him taking over his job on Earth-19 now that he’s retired. Cisco hasn’t decided yet and doesn’t hit her back–we all know you saw that text, Cisco! And we can guess the rest of Team Flash has no idea this is even a thing.

I think I’m losing my mind this time.

Harry’s running an experiment on Caitlin to bring back Frost. It’s pretty obvious that he’s not running at full tilt–he’s forgetting things, like the fact that all the dark matter in Caitlin’s body is gone. He finally admits to the team that injecting dark matter has caused him to start losing his intelligence, and it’s only going to get worse. He wants to figure out the solution himself, but aside from his waning smarts being a bit of an obstacle here, Barry reminds him that the way DeVoe wins is by splitting them all up. They have to work together if they’re going to win. 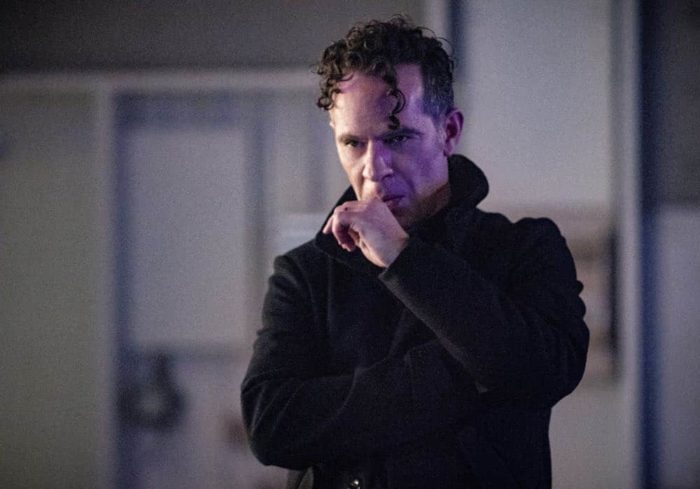 DeVoe and Marlize break into a Vandermeer Steel–pretty easy when you can breach in, morph your eyes into someone else’s to pass the retina scan, and turn your hand into a key to unlock the door. (Thanks, Ralph.) They’re stealing the first step to their enlightenment is some sort of top-secret technology encased in several large metal vaults, which DeVoe is able to shrink down to the size of Tic Tacs. A young security guard catches them, and DeVoe uses (one of his) powers to freeze the guy and make him put his gun to his own head. Marlize points out that they don’t actually need to hurt him, but Clifford reminds her that she knew there would be casualties before they breach away into a pocket dimension.

The next morning, Joe is on the scene with Barry. That guard did in fact shoot himself in the head. Turns out what DeVoe stole was solar panels–apparently really efficient solar panels. Barry asks Cisco to try to vibe the guard’s gun to find DeVoe, but Cisco’s not going for it, saying his powers aren’t strong enough–he’s not interested in getting that kind of migraine again. Could Gypsy (who’s got the powah!) do it? Uh, well, you know she’s kinda busy right now… Yep. He’s still dodging homegirl’s calls. He’s not trying to invite her over right now so that he has no choice but to discuss a career change.

Joe needs a favor from Harry. He wants him to distract Cecile, and Harry can’t know why because Cecile can still read minds like a beast. He agrees, of course. Not like he’s got a lot else to do these days, and she’s his only friend.

Another flashback–this time, it’s Marlize and DeVoe having a terribly English picnic in a park. Marlize is telling Clifford that she found his rude, public disagreement refreshing. But dude has a little swag–he dances with her and slides in for the lips.

Meanwhile… Seems that despite Cisco’s protests, Gypsy’s on Earth Prime so that they can combine powers and vibe the Vandermeer guard’s gun to figure out what DeVoe is up to. It’s a shipping container, No. 16, down at the docks–and is probably whatever he’s planning to steal next. But unsurprisingly, when the Flash, Vibe, and Gypsy show up, DeVoe is there already. (Can I just say that the whole “one step ahead” thing is getting hella old? I, for one, will be happy when this plot line is resolved.) It’s a different container he was after anyway, and he’s already gotten whatever was in it, which, after another episode of “Honey, I Shrunk an Essential Element of My Evil Plan to Save Myself a Hernia!,” looks like a fucking cocktail umbrella. Flash rushes him and ends up in some cold, snowy pocket dimension, and when Gypsy and Vibe try to blast him, he dispenses with them with nary a fuck given. Man, Team Flash. This is an awful lot of Ls you’re taking this season. Just sayin’. 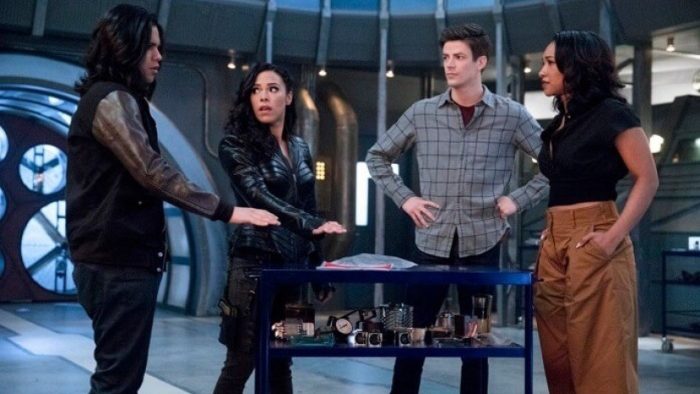 Gypsy blames Cisco for their inability to vibe the right container (though, would that have actually made a difference? My money is on NAH), and they start spatting right in front of the Flash. When Cisco asks if this is what working with her would be like if he took Danny Trejo’s job, Flash is like, “What job?” Oops.

Barry and Cisco talk about the job offer and what he’s going to do. He admits he wants to be with her more than anything, but he also doesn’t want to leave his team at the mercy of The Thinker. Barry is sure he can fix this and takes off.

The way we were.

This flashback shows Marlize wearing the tritest moving-day bandana ever as the young couple settle into their first apartment. She sends him off to get them wine, and she starts snooping through one of his journals. By the time he’s returned, she’s freaked the fuck out, convinced he’s written a manifest to rival the Unibomber’s. He’s declared war on the world’s leading philanthropists–he believes the people need to be deprived of the help that technology provides them, that people need a reset to restore balance. Basically, he thinks he’s Thanos without the fancy glove but a slightly better jawline.

Cecile is in the lab with Harry and notices that his thoughts are a mess. The more they appear, the more they disappear. Basically, the harder he thinks, the faster he loses the ability to do so.

Gypsy is at CCJitters taking shots of espresso like other people take shots of tequila. Barry finds her and whooshes her to S.T.A.R. Labs to talk to Cisco, spelling out the sitch for them (and everyone else in the room): She’s upset because he’s taking so long to take the job offer, and he’s dragging his feet because he doesn’t want to desert his team. But this Barry-led therapy session is interrupted when an alarm goes off; there have been two more break-ins at tech companies, with more dead security guards. Cisco and Gypsy try combining their vibing powers again, and this time get blown back by DeVoe.

Iris tells Barry to take a chill pill–that he can’t force Cisco and Gypsy to sort out their issues. She says that while he feels Cisco’s pain, he can’t fix it–he’ll just need to support him whether he and Gypsy are together or apart. And that’s all it takes to for Barry to realize that all the tech DeVoe has been stealing isn’t supposed to work together in a single evil. He’s building MULTIPLE evil machines.

Meanwhile, Cecile notices that she can see Harry’s thoughts clearly enough to write them down before they disappear and starts scribbling on the board like Russell Crowe in A Beautiful Mind. Coolest dictation service ever.

And we’re flashing back again, this time to a chem lab somewhere in the developing world. Marlize and a colleague have successfully purified water. She’s running out of the lab to tell folks when Clifford calls distraught. He misses her, but she says she’s not coming back–she’s working on something that’s making a difference. Suddenly there’s gunfire and screaming in the background, and homegirl is lying in rubble unconscious. 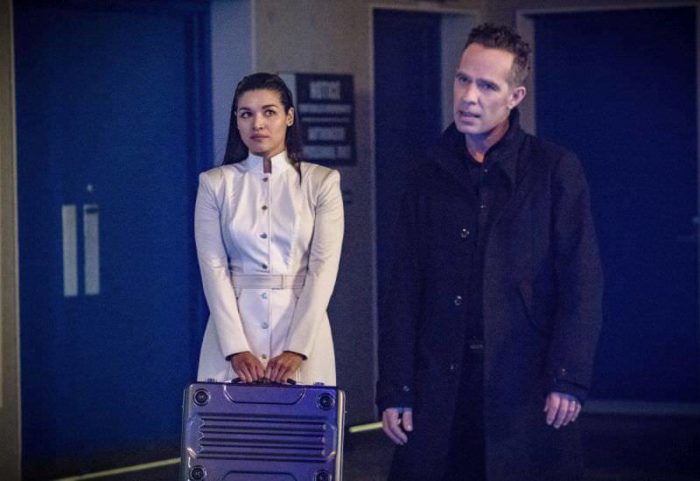 Gypsy and Cisco finally talk about the job–and, surprise!–neither of them want him to take the job. She doesn’t want anything to change. Cisco is upset, though. As much as he doesn’t want the job, he also is tired of being in the longest long-distance relationship. He doesn’t want to have to breach to spoon his girl. It’s not enough for him, but apparently it is enough for her.

Down in the Cortex, Barry has figured out what DeVoe is up to. He’s heading to Mercury Labs and its giant network of computers. Iris figures they can finally beat him to the punch. (Why? No effing idea. That hasn’t been a theme this season.) Cut to DeVoe and Marlize making the Mercury supercomputers bite-size before Team Flash has had a chance to even walk out the door. But maybe not! Just as the couple are about to make their exit, the Flash knocks DeVoe into a wall and blasts him. Vibe pops up behind Marlize before she can move. Could it be that they’re actually not going to get their asses totally kicked this time? Well, maybe not. Marlize is no slouch; she can’t shoot beams out of her hands or anything, but she knows how to throw ’em. She knocks Cisco out and pulls out that katana. Gypsy takes her attention away from Clifford to stop her from knifing her boo, and here comes Caitlin with the cannon. She’s trying to get back in the action and bring back Killer Frost. But DeVoe does the 500-pounds-of-concrete maneuver on both the Flash and Caitlin and then levitates Gypsy into the air, preparing to crush her windpipe the same way without even touching her.

Cue Marlize having yet another crisis of conscience, saying she won’t watch him kill an innocent life again. He hits her with the same power so that she can’t move–and she’s holding her arm like it’s injured. She gives him yet another mini-lecture about what his ultimate goal is, and down goes Gypsy, looking pretty dead. He then tells Marlize to get the case and they stride into their pocket dimension again. Luckily, Gypsy’s not dead–when Cisco comes to and scrambles over, she does the deep breath of someone who just had the equivalent of a boot on their neck for a long-ass time.

In the meantime, Harry and Cecile have finally figured out The Thinker’s plan. He’s going to use a network of satellites to blast the earth with so much dark matter as to turn everyone into, well, what Harry’s about to be: not terribly bright.

Flashback time. Marlize wakes up on a cot with her arm in a cast with a concerned Clifford by her side. He rushed there as soon as the line went dead. This attack has made Marlize turn a corner and is now a True Believer–technology IS a cancer. Fast-forward to her sitting in his chair while he tells her her re-broken arm will heal. We’ve all been waiting for Marlize to finally snap, join the #metoo movement, and tell Ol’ DeVoe that time’s up! Looks like she’s finally had enough. She tells him she’s leaving him. And because of the chair, he can’t touch her. She reminds him that her commitment was to her husband, and he’s dead–The Thinker’s first victim. “You are nothing without me.” And with that, she’s Audi 5000.

Aha! Joe wanted Harry to keep Cecile occupied so that he could plan a surprise baby shower for her. That’s sweet.. Cisco’s still bumming, and then there’s a knock at the door. Uh oh, it’s that chick from the coffee shop, the one with the Oregon Trail shirt who keeps popping up. This time she’s brought a diaper bag for the expecting couple and then disappears, so… we know this “gift” can’t be good. And, wait–is she a speedster?

Sure we’ll find out soon.