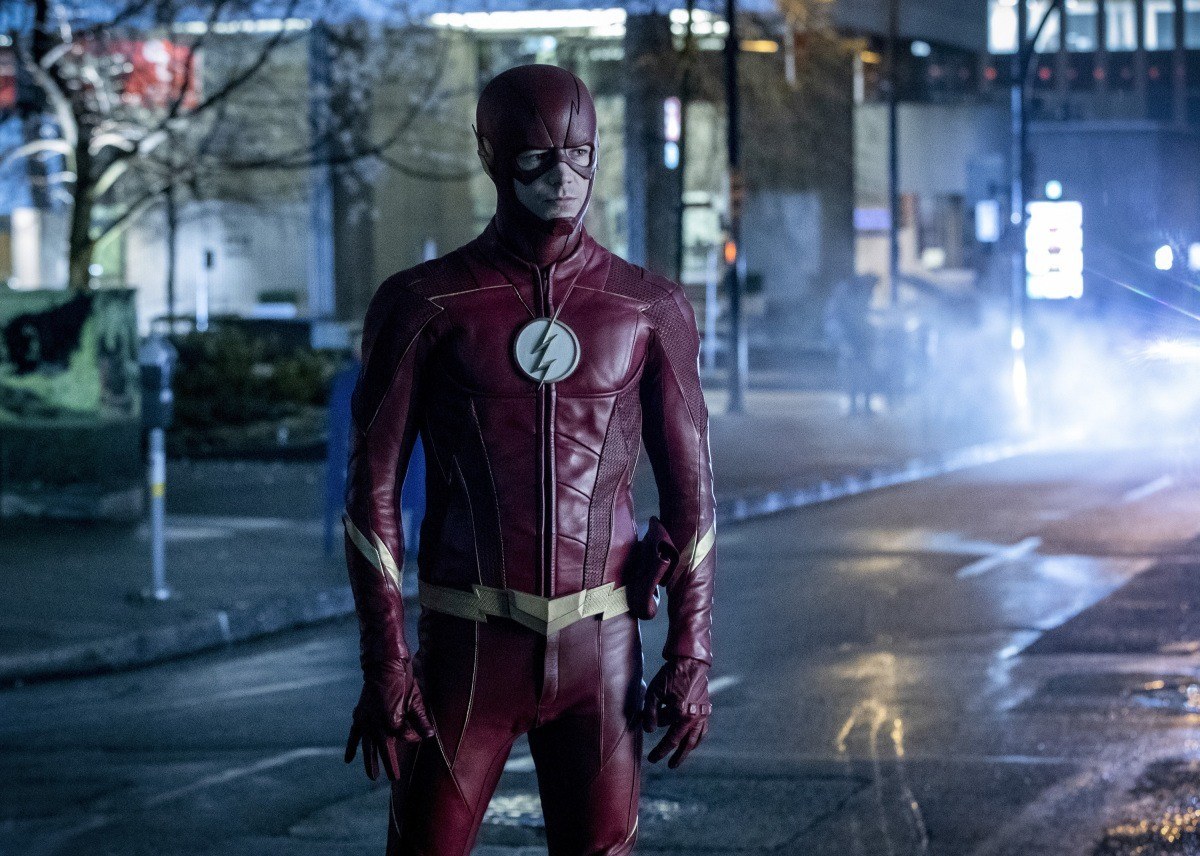 We’re almost through the season!

Season Four’s penultimate episode opens with DeVoe obviously posing as John Diggle while scamming his way into an A.R.G.U.S. black ops site. The second he’s in, he starts unleashing death and destruction while the Hallelujah Chorus plays in the background. He makes a comment about how his wife abhors violence, but since they’re, uh…taking a break, I guess he feels free to open a can of whoop-ass on every commando he encounters, which isn’t hard when he contains multitudes of meta-human powers. He makes it into a lab holding whatever it is he’s come for as the scientist there desperately tries to send an SOS on some fancy iPhone.

At S.T.A.R. Labs, Cisco is thinking that when DeVoe resurfaces, he’s going to want to head to an airfield to trigger his Stupid Machine. He suggests the team split up and each cover a different location. Barry’s not really with that considering how dangerous DeVoe is even when they’re using the buddy system, and especially right now when they’re not running at full-speed. Caitlin’s trying to find herself, er, Killer Frost; and Harry is, well, giving everyone a preview of what happens if the Thinker’s plan comes to fruition.

In the meantime, Iris’s blog is generating a lot of chatter. Half the city claims to have seen DeVoe, but then she gets a message that looks like it may be a real lead if she can un-encrypt it.

Is there really only one therapist in all of Central City? Caitlin’s on the couch this time, talking about her “missing” friend. The shrink almost immediately assumes she’s got multiple personality disorder, but does start digging into Caitlin’s childhood and her experience of losing her father to ALS. Is there something else, though — some other sort of trauma lurking in her past? Unfortunately, they have to cut their session short when Caitlin gets hit with an alert from the team. When she asks the therapist if she charges by the hour, the doc replies that for her and her friends she charges by the quarter-hour. Makes sense.


The crew finally unencrypts the message Iris received, and it turns out it’s from that A.R.G.U.S scientist: “Devoe coming for Borman.” Yeah, he wants Fallout. Where’s A.R.G.U.S. keeping him? Barry dashes to Star City and returns with a very unhappy and nauseous John Diggle, who immediately wretches into a trashcan. With a little prodding, he discloses that they’ve been keeping Fallout in a facility called the Castle. Diggle’s not thrilled to learn that DeVoe got in by impersonating him, but now that they know where the Thinker is, they also know what he’s up to — Fallout makes a perfect battery. They’ve got 12 hours until the Enlightenment begins.

Barry thinks it’ll be easy to get into the Castle, but it’s built like a steel trap if that steel trap has, like, 5 billion volts running through it. The floor is made up of metal plates that arbitrarily send deadly electrical blasts if triggered. So, Barry figures out a way to use this to his advantage–if he’s able to trigger all the plates, he can use the power boost to run fast enough to follow DeVoe into his pocket dimension and destroy the satellite on the other side. Only problem is DeVoe’s got six hostages, including that scientist, suspended above those plates.

Back at the West home, Joe and Cecile are getting ready for baby, packing up a bag for the hospital. Apparently, Wally’s even going to make a visit to meet the newest West kid (Yeah, we’ll see. Personally, I think we’re never seeing Kid Flash again, but anyway). Now that we’ve almost gotten used to Cecile reading every-damn-body’s mind, shit gets even weirder. She’s talking to Joe when suddenly she sounds like an extra from Bill and Ted’s Excellent Adventure. Just then, a pizza delivery guy arrives at their door talmbout “Dude, where’s my car?” Huh. Well, this is a new pregnancy symptom. Why doesn’t she just get swollen ankles and hemorrhoids like the rest of us?

Iris is searching for Marlize, figuring that she’s just as dangerous as DeVoe and needs to be stopped before she makes an appearance. Harry has a brief moment of clarity and points out that instead of using facts to try to find Marlize, Iris should focus on feelings. Where would Marlize feel safe right now? Iris is impressed with his insight–it’s been a while since Harry felt (or was) valuable and helpful–and she asks him if he wants to help investigate.

In the meantime, Caitlin and Cisco have an idea. They want Barry to bring them into Flashtime with him so that they can help rescue the hostages while he goes after DeVoe. They’ve been doing a little research, and the aura Barry generates when he enters Flashtime means he doesn’t need to physically hold on to them. They’ll have enough time to get the hostages out of A.R.G.U.S. while he pursues DeVoe. They give it a trial run, and Cisco finds it’s harder than they thought. When he starts getting nervous, he can’t even move his legs, much less open a breach.

Caitlin examines Cecile to figure out why she went all Surfin’ U.S.A earlier. Seems the increase in relaxin, a pregnancy hormone, is expanding not just her joints but her telepathic power–she’s not just reading other people’s minds now, she’s able to inhabit them. She even spends a few seconds being Caitlin during the exam, which prompts Cecile to remind her that there’s no point in hiding from memories: she should confront them.

Harry and Iris continue their search for Marlize. While his intellect may be degrading, his empathy seems to be on an upswing. He suggests that Marlize can help them stop DeVoe. Iris isn’t buying it — she did get a sword to the chest, after all, and is way less convinced that Marlize isn’t a monster just like her husband.

Flashtime training continues. Cisco finally is able to open a baby breach. Caitlin, though, is unable to successfully use a weapon, and when her legs get stuck like Cisco’s did, we briefly see a flashback to a bike accident she had as a child when her legs were also stuck. With that, Caitlin is thrown out of Flashtime — into a wall, and knocked unconscious. That’s a wrap for Barry: he refuses to train them any further, certain he’s going to get them killed.

Harry follows Iris home to apologize for being insensitive to her feelings about Marlize. However, he’s still heavy on the empathy train and storms into the loft. While tracking mud everywhere, he points out that Marlize used to be an activist dedicated to helping people, and could be convinced to help them. It’s the mud that makes the difference. Iris mentions that he’s making a mess in her home: the first place she’s lived with Barry, and it’s the place she feels safest. Just like that, she knows where they should go look for Marlize.

Joe gets home and finds Cecile gathering the bag to take to the hospital — along with the katana she vetoed earlier. This time, she’s Joe! Oh, boy. She take a puff of the inhaler Caitlin gave her, and totally loses herself, not just behaving like Joe but being him. A little mindfulness pulls her back.

Cisco is annoyed with Barry and his reluctance to keep training them to use Flashtime. Barry’s terrified about losing his friends like he lost Ralph. Cisco gives him a pep talk and reminds him that Ralph became a better person because of Barry, one who would make the choice to be a hero. They want the same choice.


By the time the Flash, Vibe, and Caitlin get to the Castle, DeVoe has shrunk down Fallout’s containment unit to the size of a G.I. Joe action figure and is heading into his pocket dimension. The hostages are all frozen in the air over the electric plates. The Flash runs through, triggering each one to accelerate, then narrowly slides through the breach into DeVoe’s pocket dimension before it closes.

On the other side, DeVoe releases his five tiny satellites into the air, followed by the Flash who uses the metal grenade Amunet gave him to destroy one of them. DeVoe pops up behind him quoting Nietzsche (of course), seemingly unfazed. There are more satellites where that came from, basically, and The Thinker believes that once he’s reduced the world’s population to a bunch of drooling drones, it is he who will teach the dumb masses how to live and lead them to a new peace. When the Flash points out that with this plan all human relationships will be destroyed — children won’t remember their parents, husbands won’t remember their wives — it becomes really clear that he’s still hella bitter over his breakup with Marlize. Love is a welcome casualty of his Enlightenment.

After getting all the hostages out of the Castle, Caitlin asks Vibe to help her revisit the moment when she was a child that surfaced during training. They step into the past together and she realizes that even then, long before the particle accelerator, Killer Frost was a part of her.

Iris figured out that Marlize went back to England. She and Harry breach into Marlize and Clifford’s first apartment in Oxford. This would be a great time for Harry to use his newfound empathy to reach her, but instead his bumbling gives her a clear view of what’s going to happen to all of them. This time, though, it’s Iris who is able to put aside her feelings and try to get to the part of Marlize that knows her husband’s plan is wrong. Iris says, “You asked me what I’d do to save my husband. I’m asking you what you’re going to do to save the world.” Iris with the bars again.


Back at S.T.A.R. Labs, an alarm goes off. Guess who’s there, using the particle accelerator to launch his Enlightenment?

Next week’s going to be a doozy.