We went to the land of milk and Starbucks for #GGC17 and our #BlackWomenDreaming panel. Here’s how it went down:

Enjoyed Our #GGC17 panel, #BlackWomenDreaming? You’ll love these articles from our panelists! pic.twitter.com/PtCzQ53nXv

LESLIE: Geek Girl Con is well on its way to being a permanent part of my fall nerd activities. For the second year running, we had a great time. We were welcomed by artists, booth dealers, cosplayers, and panelists, not to mention the city of Seattle at large.

This time around, I divided my time between socializing with other Black women nerds at the con and attending the wide variety of panels. A highlight for me was the Como Se Dice Nerd panel on Sunday. The 4-woman panel held a wide-ranging conversation about being Latinx (a gender neutral word to refer to Latino, Latina, and non-binary people of Latin descent) in nerd spaces. Part of the conversation was about how, while we may share the “People of Color” tag, being a Latinx nerd is very different from being a Black one. The diversity of culture, language, and geography within the box “Latinx” makes talking about a “Latinx experience” challenging, let alone mobilizing any sort of group wide opinion or social media force, like #NoConfederate or #OscarsSoWhite. A huge point of conversation among Latinx people, regardless of how long they’ve been in America, is the idea of “passing into American-ness” and how their nerd interests signaled “American-ness” to their families and friends — with better or worse consequences. They really encouraged the audience to interrogate their Latinx nerd stars, to find the ones that they love and identify with, and if they can’t do that, to create their own. With such a wide variety of Latinx voices on the panel, comic book producers, ‘zine writers, novelists, and fans, I left wanting to know more and immediately started following @ComoSeDiceNerd on Twitter and haunting the #LatinxCreate hashtag. I felt a number of overlapping concerns with the panelists while also learning a lot about the specificity of the Latinx experience in America. Informative and entertaining — exactly what you want a panel to be. 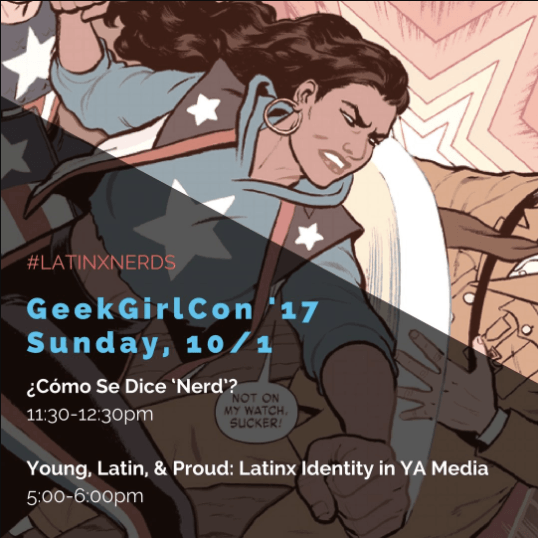 LAUREN:Geek Girl Con was one of the first conventions where I really felt seen, not just because of the subject matter and diversity of panels, but in the smaller details of the con’s structure. First was Introvert Alley, an addition I might have to make my personal mission to demand from all future cons. A quiet space filled with folks eating, barely whispering, typing quietly on laptops, or just catching a quick nap, Introvert Alley reminded me of a Press Room without the incessant undercurrent of need for productivity. Even though the con itself felt spread out enough that I was able to secure a peaceful corner to myself, just the knowing that there was a safe space to recharge my energy gave me more social stamina than usual. One consideration I would suggest might be to rename it Quiet Alley or Comfy Corridor, something that makes it immediately apparent to overstimulated extroverts that they’d also be welcome. 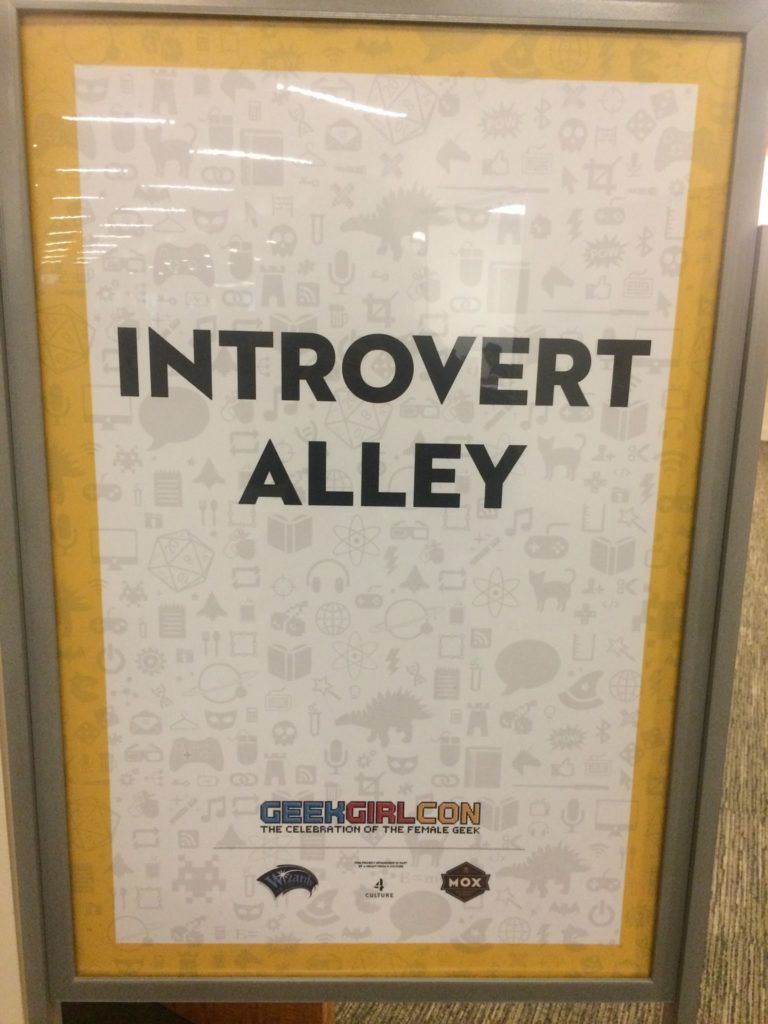 Speaking of welcoming, this brings me to the POC meet up engineered by Geek Girl Con agent Rebecca Davis at the Tap House Grill. Normally the idea of this kind of get together is a nervous nightmare for me, but Rebecca’s consistent warmth and genuine nature drew me in when she invited our group. The room was a good size, the location wasn’t too far from the convention center, and the atmosphere was casual enough that you didn’t feel compelled to mingle or even engage with everyone, but you still felt like part of the community immediately. I also liked that food was optional and that there were plenty of Seattle locals who were able to explain some of our culture shock and the real history of the neighborhoods we were staying in, an experience you normally only get if you already have connections in the city. Like Introvert Alley, I would totally hold this meet up as a model for necessary additions to all future nerd conventions.

IZETTA: I am counting Geek Girl Con 2017 as my first official large nerd con and I cannot begin to describe all of the feels. Geek Girl Con is first con that I ever attended were I not only felt welcomed, but wanted. It is common for Black folks and most POC to find ourselves weaving in and out of predominately white spaces. We often carve ourselves time and space within places that were not designed for us, but toted words of welcome and vague celebration. Geek Girl Con is not that kind of space. It is unique in its design of creating spaces for all of us. Geek Girl Con gave us spaces shared, spaces uniquely set apart, all welcoming and all celebratory.  At Geek Girl Con, I felt visible. It was the first con that made me feel seen. From the art that was displayed throughout the halls to the panel discussions and the attendees, you knew from walking in that diversity was not a second thought or a mere additive. Instead, diversity seemed to be what Geek Girl Con focused most on and everything else was second.

One of my favorite panels  at Geek Girl Con ‘17 was Virtual Reality in Pop Culture. The panelists were Stephanie Hawn, Dr. Evie Powell, Aileen McGraw, Eva Hoerth and Drew Stone. The discussion centered around representation in and of VR in media and in its social and practical uses. Dr. Evie talked a lot about POC representation in social VR gaming. Much of her focus was on how identity in these spaces in reflected in our avatars and the limitations that affect various communities. Dr Evie and many of the other panelist talked about sexism, ableism and rape culture in VR. What I loved most about this discussion is that the panelists offered answers to combating the -isms. When asked, they also offered answers and ways that they are actively finding ways to make virtual reality more accessible to underrepresented communities. These were necessary conversations to be had about representation and access. I’m happy to say that these conversations were happening in this and many other panels throughout Geek Girl Con this year.

CARRIE: Leslie and I went to GGC last year and enjoyed ourselves immensely. I knew deep down that I wanted to return and that we should bring more womenfolk with us when we did. AND WE DID. WE BROUGHT OUR SQUAD. I have to say the environment was inviting, the sense of community was there, present and alive. Coming back into the fold of the Geek Girl Con reminded me of the spirit of con: that we’re all welcomed and free to be who we are unapologetically. And you know I leveled up cosplay wise, last year I was Uhura and this year I was a lightsaber toting Finn with that infamous jacket and all.

My favorite panel: the Comics as Resistance one that took place Saturday night featuring a phenomenal lineup of educator Rachelle Cruz , and artist Taylor Crockett and writer Kristen Enos. I was hyped to hear about the experiences of creative womenfolk from marginalized backgrounds on their bodies of work, on where they first saw themselves represented and how they fought to make their place in their world. Cruz gave us a page of these extraordinary reading recommendations that included comics, prose and teaching texts. Crockett, (who has some terrific #Inktober illustrations, by the way) spoke on several comics that featured POC that capture people by the feelings (Another Saga fan!) Enos told us at her breaking into comics as an Asian American woman who previously worked in Corporate America and detailed her amazing, LGBTQIA themed projects. (Take my money!)

There were so many great panels; with a focus on panels that catered to the POC/Marginalized perspective. When Leslie had first told me that she had submitted our panel idea of #BlackWomenDreaming: Building A Creative Community, I didn’t think we’d hear back with a yes. We did and we rocked it. And we touched folks with our presentation and our words and that feedback didn’t just come from Black women who attended. A Filipina friend of mine that I met at the con that I know from Twitter told me that she recently reconnected with a Filipina Activist group in her attempt to build her own community of women to and for support. Ripple effect, much? I also had time to meet and speak with the Looking for Leia documentary film crew that was there that weekend and how did I love them! Hearing the love of fandom, of Star Wars and Leia and that representation in the world of fandom that women are present in but often excluded from certain circles just warmed my heart.

I soon found that I wanted to be everywhere—I wanted to see everything and I wanted to hangout and meet everyone. There simply wasn’t enough of me to go around. And even as I was leaving the convention hall suitcase in hand to leave to jet to the airport I was hailed down, hugged and spoken kind and loving things to. From meeting new friends that I had fangirled with on twitter to old friends that I had met and congregated with last year to the new friends I met and followed from the Women of Color meet up that took place later that evening. I love Geek Girl Con for being inclusive and welcoming of us and that manifested in several ways from general neutral bathrooms, to nursing stations, to wide aisles for those who had walkers, wheelchairs and strollers and the like and what can’t be understated—the terrific panels devoted to marginalized folks. I’ll be dreaming of you until next year GGC. Thank you for being you. (PLEASE have a green room next year. It was sorely missed as there was one last year!)

NICOLE: What struck me most about GeekGirlCon was its inclusive personality. If GGC was a person, they’d have a coffee, a snuggie, and a good book waiting for me when I arrived at their house. Lauren mentioned how friendly the agents we met were and how the details made a good experience better. Leslie and Carrie noted how inviting the con was last year and how that made returning–with a squad–an easy choice. All of the BNP crew that went have a “my favorite panel” story to tell or a “I just met the nicest nerd” anecdote or a panelist who said the realest, truest, most down to earth sh*t and got that instant follow on every social media outlet either because I need that kind of positivity in my life.

But those aren’t even the parts I’m talking about. Beyond seeing a wide range of Black and brown women on panels and on the showroom floor (thank you, lord for smiling down upon me and my desire for art that looks like me and my friends and family) and in low-pressure but well coordinated social sessions, what I saw was a wide variety of gender expressions and a generally low level of fuckery (none that I saw and at some point I started actively looking because I’m a cynic who expects the worst of people).

At almost every panel I went to and while I walked the floor I saw nerds with nontraditional gender expressions walking around and nerding like nerds do and I didn’t hear or see the basic ass gender police show up with their wack and ignorant comments. It’s really sad that “full of decent people who mind their own business when it comes to gender” is the bar that the world has set, but it is for now and, from what I saw,  GGC surpassed that and hosted a place where it was safe for nerds to be nerds.