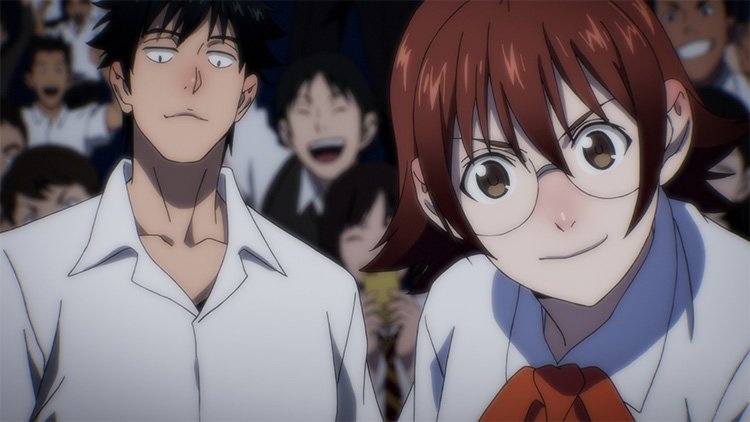 The opening of this episode of God of High School was huge. A brief minute was all it took to bring everyone into a world that sets this apart from other battle anime. In the opening, an island is shown with odd marks drawn carved somehow pressed into the land. The only explanation to one man in the room is charyeok, which we will soon find out means to borrow power from a “God”. To end the quick but stacked opening, someone by the name of Park Mujin walks into this Pentagon-like building like a damn boss! Who is this Republic of Korea National Assembly person rollin up like Deebo?

I gotta say, I’m loving the comedic side of this show! When Mori and Mira are on their way home and he’s inspecting her like a thoroughbred before asking if she was secretly a gorilla (because she snapped his damn neck during the slippers jerk fight), I cried!

Started From The Bottom..

Episode 2 hits us with a little more of that character backstory any good anime needs to be filled with. Our main boo Jin Mori wants to fight as many guys as he can to get stronger. Goku immediately comes to mind when listening and watching this starry eyed protagonist and you can’t help but root for him to kick ass left and right. Daewi is in it for the money while the pride-filled Mira wants to revive the family’s sword dojo.

When Mori knocks Mira’s sword into the water and she doesn’t overreact, but instead slaps him clear across the face and dismisses him from her presence with 3 cold words, you know he done fucked up! A gut wrenching story plays out of Mira’s father pleading to not let the Moon Light style be forgotten. He wants her to find a proper successor to the fighting style and has no idea he’s unintentionally creating the beast that we now know as Yoo Mira.

She’s wading in the water trying to find the sword so she can fulfill her one and only wish, when Mori pulls up with a flashlight offering a second set of hands. Aaaannndddd then Daewi comes through a few moments later with a brolic spotlight that wasn’t sketchy at all. Don’t worry he “borrowed it from work”. This scene was all it took to solidify these three as the trio we’ll be riding or dying for all season.

Sidebar: I’m not sure how time works in this show, but I’m kind of digging the time jumps and holes that are being left out. We never saw how episode 1’s battle royale finished, and only got a glimpse back at it because of the gorilla joke. Now we have no clue how it went from a battle royale to bracket style tournament…..but it did and now it’s time for fisticuffs!

Mori, Daewi and Mira handle 1st round business with ease. Wannabe Madara watches Mori’s matchup and recognizes the unorthodox taekwondo skills that come with these shonen protagonist hands. Fuck what you heard, Mah Miseon is a wrestling fans dream! Homegirl came out the gates hittin dudes with stunners and now she’s suplexing mufuckas into oblivion like Kurt Angle! Bast praise a lovable anime nerd because Baek Seungchul gives me LIFE embracing his inner nerd and reading a book the entire time he whoops somebody ass with a metal bat. Hit em with that Kakashi sensei flow.

Of course the most honorable person in the room picks a fight with the Madera of High School aka Slipper Jerk and gets matched up against him this round. Love Tai Chi but it didn’t feel like it was going to be enough to beat the mufucka who just made your nose bleed with the wind from a kick. Mori tells him to be careful, knowing how tough the beast mode asshole is.

Match starts and in the middle of the ring Go Gamdo starts spewing venom about dude falling off the path of a martial artist. Them fightin words where I come from! Gambo surprises everyone with some fireee tai chi techniques! He’s putting that overworked and underpaid overtime in. A few rabbit step, dragons strikes, flaming ten thousand horse strikes and steel ogre mountain strikes later and Madera of high school realizes he better come correct or risk getting washed.

Unfortunately, that’s all she wrote for Go Gamdo. Slipper Jerk removes one hand from his restraints and start molly whompin on that man! The fight went from “Oh dam, Madara ass dude getting serious now”, to “DAMMM Gamdo is getting destroyed right now”, allll the way to “Welp, he brought that disrespectful ass Northern-style Taekwondo into the ring and Gamdo is basically a dead body.” I loved the hope and optimism that Gamdo displayed but they are simply on different levels and the final block sealed that deal. Skipper Jerk had Gamdo by the neck dangling like string cheese.

Jim Mori does what any great lead character would do in this situation, and intervenes, which makes me so proud. Butttt it also places him in a real shitty position now. With that being said, I’m really excited to see how this all unfolds next week. What sort of punishments are doled out in this kind of a tournament? Will this decision give us insight into the tournament administrators or what kind of anime this will wind up being? Can’t wait to find out.

Honestly, that episode contained one of the more wholesome solidification of friendships I’ve seen in an anime, and the fact that they pulled it off so quickly and effortlessly hopefully means we’ll see the impressive writing continue. Also, I’m beginning to appreciate the duality of each episode. They don’t focus solely on one lane and it makes for much richer storytelling. The first episode was an amazing intro to the world of teenage carnage, but this 2nd one is firing on all cylinders. The fun story, grin inducing humor, genuine fighter motivation, battles that exude pure hype and top notch writing are all on display in the 2nd episode of God of High School.