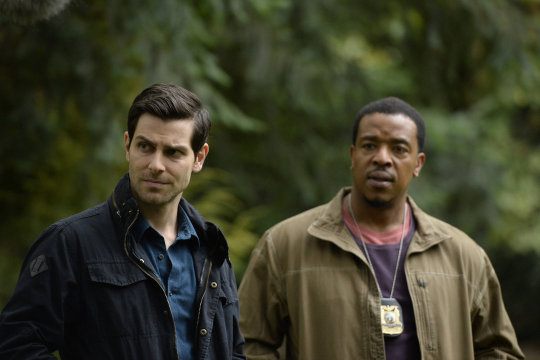 [quote_simple]“When something itches my dear sir, the natural tendency is to scratch.”[/quote_simple]

We return to Portland to see a huge bug-type-thing clawing its way out a well-manicured park lawn late at night. Immediately, it un-woges into a man in tattered clothing. He’s looking at everyone walking past him like they’re a pork chop. Cue the unlucky dude walking and talking on his cell. I think you know it didn’t work out for that dude, but he did manage to call 911 before becoming a midnight snack.

In the tunnels tombs under the loft, Eve is laying on the ground like she’s exhausted from a wild night of partying. And by partying, I mean obsessively scrawling ancient hieroglyphs on the wall, compelled by some unseen force that I’m sure is the stick. Her hand is still marked by a hieroglyph where the stick defended itself and burned her. Upstairs, Nick is having a restless nightmares-about-all-the-people-I-killed-in-this-loft sleep. He gets up to check on Kelly and have a drink of water. For some reason, he decides to open the door to the tunnel to look around. Before he can do anything Adalind comes to get him in that “baby, it’s 3am come back to bed” way.

Sidebar: Has this dude not checked on Eve in days? What in the hell kind of friend or fearless leader is this mess? Only reason old girl was a hexenbeist in the first place was trying to save his ass because he wanted his Grimm powers back. Only reason old girl lost her powers was because he decided to use the not-FDA-tested stick on her and now he just abandoned her in the tunnels while he’s cozy upstairs in a bed with his rapist? C’mon man, throw her a blanket or a sandwich or some human decency or something.

At Casa de Renard, Diana is asleep while her dad unpacks her voodoo dolls and the tiny sword she used to kill Bonaparte – or to make Renard kill Bonaparte. Meanwhile, Renard is conversing with the ghost of Mesiner like full-blown conversations with guys you shot in the head are normal. After apologizing for killing him and thanking him for helping deliver Diana, Renard starts drinking. Brava on the excellent life choices Sean. As proof that this was a healthy coping mechanism, Renard immediately sees rows and rows of dead Mesiners on his floor.

Meanwhile in the park, un-woged bug-guy emerges from the lake looking considerably less haggard and dirty and evil.

Rosalee and Monroe are mid-ultrasound and they hear one, then two, and then three heartbeats. Triplets. Trip. Goddamn. Lets. Nick and Hank are at a diner talking about the stick and Nick’s odd low-key addiction to it when they get that call from Wu: a body. It’s unlucky cell phone guy minus all of his clothes, wallet, and ID and in close proximity to a pile of rage which can only be what bug-guy was wearing as he clawed his way to the surface. They run the prints and get a name. But before they can follow-up on that lead, they hear screaming from the other side of the park. Seems like a kid fell into the bug-guy’s hole and, lo and behold, there’s a decayed corpse in there. It doesn’t take long for Nick and Hank to figure out the hole the kid fell into was made for two. Since one of those two is missing and there’s a dirt trail from the hole to the dead naked unlucky cell phone guy, they have an idea about what happened even if they don’t understand it.

Across town Adalind comes to pick up hellspawn from Renard. He’s acting weird because of the drinking and haunting. He seems on the verge of asking for her help, but doesn’t follow through.

Bug-guy is at a diner eating everything in sight and generally creeping out the wait-staff by referring to food as “she.” He seems disappointed that “she” didn’t last long enough; she was evidently so pretty that he got distracted as he was assessing her longevity as a food source. Which is why the waitress remembered him when Nick and Hank came calling after the dead man’s credit was used at the diner. All of this is confirmed when the medical examiner reports that the body retrieved from the hole was a female, was buried for at least five years, had an unidentified digestive enzyme in and on her tissue, and gnaw marks on every bone of her body. Completely freaked out by his ongoing conversations with a man he killed, Renard calls Striker and sets up a meeting for that night.

At the loft, Diana asks Adalind about Meisner, y’know, because her father was screaming his name in his sleep. This kicks off a walk down memory lane that includes the time Meisner helped deliver Diana and the time Meisner threw the king out of the helicopter while Diana watched. Diana misses Meisner and wanted to see him; she seems undeterred about the whole “he’s dead” thing. As Adalind is pretending not to be straight scared of her own kid, Diana drops another bomb: “Eve’s here, in the wall, drawing.” Adalind is obviously like WTF so she goes down into the tunnels to find her. Eve looks like slow-simmered garbage and she barely makes it up the ladder before she passes out in Diana’s bed. Diana, like the problem she is, goes into the tunnels the second her mother’s head is turned.

She catches the holy ghost. Her purple blacklight eyes illuminate everything Eve drew on the walls. Adalind comes up behind her and is appropriately freaked out. Once they’re back topside she calls Nick.

While Adalind is rescuing Eve, Nick and Hank are at the spice shop knee deep in the books looking for mentions of other bug-guy Wesen. Rosalee and Monroe show up with their “good” news about the triplets and get into the search with them. Turns out the bug-guy is an immortal party animal who rises from the earth for twenty-four hours every seven years to feed and find a food source for the next seven years he’ll spend underground [*tips hat to the lady whose bones he’s been gnawing on for the entire Obama presidency*]. When Nick shows the gang the sketch artist’s rendering, Monroe is convinced he knows the face but can’t place it. Nick gets the call from Adalind and seems genuinely surprised that’s she’s been living in the tunnels. Where did you think she was, Nick? Her whole life has been destroyed. Remember how she lived at HW’s Portland base and you kind of got that destroyed? Yeah… so, I repeat: where did you think she was?

While Nick is on his way home, Eve tells Adalind that she wanted to leave, but couldn’t. She also lets her know that her superpowerful spawn sensed her down there AND was drawing the same things she was. That was a nice subtle threat to preface her “I’m sorry.” But what is Adalind sorry to Eve for? Has she apologized to Nick for the rape, yet? Nick shows up just then and Eve is like “well this is awkward, I should go.” Adalind says the realest thing, “you look like hell, where you going?” Nick sees Diana’s drawings and learns about Eve’s so he goes into the tunnel to investigate. Eve follows him. Hank calls Nick with news of another body: unlucky bar boyfriend.

[divider type=”space_thin”]
Meanwhile, Monroe is still trying to figure out how he knows the face from the sketch. He’s drawing hair on the sketch. And glasses. And a beard. And then it hits him: the sketch is of a statue at the park where the bodies were found. Since this is an immortal Wesen, it’s logical that he might very be the man who donated the land for the park and for whom the park is named. This is seeming more and more likely as partybug is describing what Portland was like in 1850 to the lovely lady he picked up at the bar. Monroe and Rosalee let Nick know their theory so him, Hank, and Wu head to the park because that has to be where he’s taking his date.

Meanwhile Sir Barely-Appearing-In-This-Episode shows up at a weird, dirty knick knack shop. He and the nondescript gentleman behind the counter immediately dive into that Wesen talk: the body body spell and the haunting. Renard wants to know if the haunting is real or in his mind. Renard gives the dude his ring (a ring that was his father’s and his grandfather’s before that), but dude pushes harder and gets Renard’s other ring (looks a lot like an engagement ring).

The guy behind the counter produces a “spirit vacuum” and promises that it’ll pull out any spirits attached to Renard. So, we just gonna ignore that the vacuum looks exactly like a glass coffin? Okay. Then the dude tells Renard to strip and get in. Now, I’m all for Renard’s abs, but this is — no, nevermind: I’m all for Renard’s abs. Partybug and his date are walking in the park, his park, and he’s in the middle of a pretty convincing speech/pickup line about the fragility and unappreciated nature of life. This obviously leads to a kiss and the kiss leads to blunt force trauma to the back of the woman’s head. But Nick and the crew show up before the bug can burrow into the ground and antics ensue.

However, Nick and Hank and Wu are getting their asses handed to them when a hippopotamus-looking Wesen bites the head off of the partybug.

Welp, I did not see that coming. Turns out the lovely lady from the bar was Wesen. She does a quick head nod at the Grimm and keeps it moving.

Meanwhile back at the glass coffin and curio shop, Renard and (actual) oiled abs are inside the coffin. The shopowner turns on the machine and a gray smoky ghost emerges from Renard BUT then a spark shocks the shopowner and he falls to the ground. When he stands up, it’s Meisner. Welp. Meisner pulls his best Count Rugen and is like “how many years can we pull off your life?” and turns that machine all the way up.

Renard wakes up in an empty room which might be the shop he went into to get answers. He turns around to find Mesiner who says only “A mind is a terrible thing to lose.”

I have so many questions: Is Renard being haunted or losing his grip on reality? What is the stick trying to say in all those drawings? Is Eve going to live in the loft with Adaline, Nick, hellspawn, and baby Grimmenbeist? What is Rosalee gonna name her litter? Is Eve finally Juliette again? Is Juliette a hexenbiest?