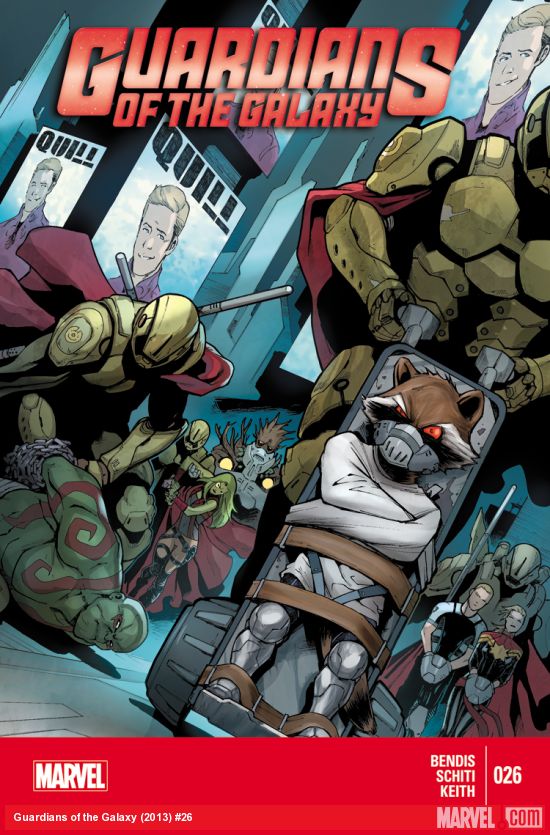 Man, Bendis is a different beast and the same animal dude (Kobe system). This guy is meticulously carving out a section of Marvel for the Guardians of The Galaxy crew and it has been working beautifully. We remember a few issues back that Peter Quill was the newly elected president of Spartax (they just elect folks very easily via popular demand. Shit, if we had that in the states John Stewart or Michelle Obama would be the next POTUS). That comes to Quill’s front door pretty quick and we see how it englufs Kitty as well as his whole crew (mostly via some quick thinking by Quill).

Bendis is having Quill grow up pretty fast within this series. He has his relationship with Kitty going to the new level (see GOTG & The X-Men: Black Vortex Omega #1) and now running an entire planet. Quill is given a chance to make some real change within the system which you can tell is scary for him and extremely new to him. As always Valerio Schiti comes thru with the art looking great. There is a bar scene with Kitty and Quill talking about his presidency that is down right fucking hilarious to read through. Schiti also did a bang up job detailing Groot’s new look post Black Vortex as well.

We got high stakes and action filling up the GOTG series so far. This is a great jumping on point to get into the series as well as witness Peter Quill beginning his way to being a straight up adult adult (he’s a bit of a man-child which isn’t a bad thing at all). It seems all good but there’s some shit going down on Spartax as well that ya gotta check out next month in order to get the big reveal.