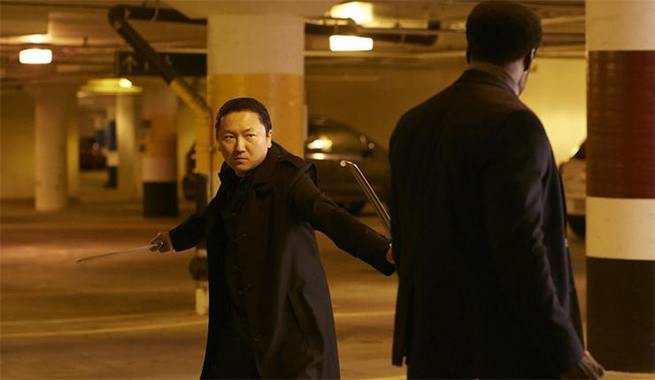 Okay, this might be a little confusing but follow me. *Deep Breathe* Heroes Reborn opens up with future HRG and future Hiro at the summit on June 13th planning to find Claire and also stop the bombs from going off. FT HRG is told Claire is at the summit by an Renatus employee and they go off to look for her as present Noah arrives. Meanwhile, on the outskirts of Odessa, a black truck pulls up to a man standing on a dirt road. The tinted window rolls down and *Allow me to reintroduce myself / My name is MO-HINDER SURESH!* The man who’s research is the equivalent to Jay Z’s the blueprint when it comes to the Evo game appears on screen. Suresh gets in the whip with none other than the dirtiest player in the game Angela Petrelli. Turns out that Suresh is being funded by Renatus and is giving a speech about how the Evo’s and humans can live in peace together. Angela is telling him, “nah son.” She saw the future and told Erica there is gonna be a catastrophic extinction event in a year. Erica decides this is the perfect time to devise a master plan to rid the world of Evo’s and restore humanity with her being the head woman in charge. Angie also sees the Evo’s who are going to save the world. Suresh isn’t feeling the warning though. Angie tells him his research team has been killed and Erica is gonna kill him too. Suresh says YOLO, meets up with Molly Walker, and gives her his research just in case.

Erica has Phoebe in a bunker at her house forcing her to make enough darkness to cover the Summit or else her brother Quentin won’t live long enough to see the new world.
Erica arrives to the summit. FT Noah and FT Hiro get into a room and start devising their plan but have to hide because PT Noah and Erica come in to have a meeting about summit security. Erica breaks it to PT Noah that he’s being cut from the team and that Claire is gonna get got. PT Noah is taken away. FT Noah tries to go after him. FT Hiro tells him to chill. Angela finds FT Hiro and FT Noah (She doesn’t know they are from the future) and lets them know Claire has been rushed to the hospital. FT Noah goes to the hospital and FT Hiro tries to find the bombs.

PT Hiro, who is a Renatus consultant, is in Tokyo. Evernow creator, Hachiro Otomo, meets with PT Hiro to show him the new game and also convince him to help Erica take over the world. PT Hiro refuses so Otomo locks him in the game and takes his sword. Thus giving Renatus the ability to harness his power.

Suresh meets with Erica, is subdued by Harris, taken to the parking lot, and is a sneeze away from getting assasnated when the FT master of time and space shows up to save him wielding two blades looking like the epic swag child of Morpheous and Roxas from Organization XIII. The illest fight sequence of the season so far occurs between FT Hiro, Suresh, and Harris clones, who are strapped with bombs that will take out the whole summit. FT Hiro could take them all out but there are “Too many butterflies”so he time travels back to the hospital.

PT Noah is being held in a interrogation-ish room and Erica sends Casper to wipe his memory. Casper instead helps PT Noah escape. Luke, Joanne, and Dennis, who has a medical condition that makes him extremely sensitive to sunlight, go to the summit to have a good time and also search for the possibility of curing Dennis.

Phoebe gathers enough darkness to cover the Summit and the bombs go off killing most of everyone including Dennis, who’s body wasn’t found this episode. PT Noah, Casper, and Molly survive and go to the hospital. Claire and PT Hiro are announced dead as a result of the bombing but the HRG’s and Otomo know that’s not true.

FT HRG and Angela get to the hospital but it’s too late. Claire had a cardiac arrest during child birth and didn’t make it but the twins are fine. FT Hiro apologizes for the loss and explains that he’s seen every outcome possible. There’s no way to stop June 13th from happening without stepping on too many butterflies. This is where FT Noah realizes why he erased his memory. Claire’s kids are gonna save the world and Erica knows this because Angela told her. He wiped his memory to hide the location of his grandchildren so they don’t get killed (Now Angela knows they are from the future). 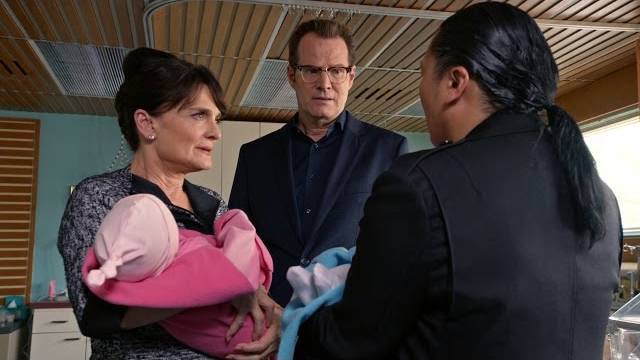 FT Hiro and Angela take the babies Nathan (Tommy) and Melina to raise them somewhere in time until they are ready to save the world. Erica arrived at the hospital with Harris to rid any trace of Claire there is left. FT Noah sees her and follows her. PT Noah sees FT Noah and follows him. FT Noah puts the silencer on the ratchet, points it at the back of Erica’s head, and the show ends with PT Noah yelling in an attempt to stop him.
*Woo that was a lot*

Are you watching Heroes Reborn? You can catch all of our recaps and commentary here in one place.