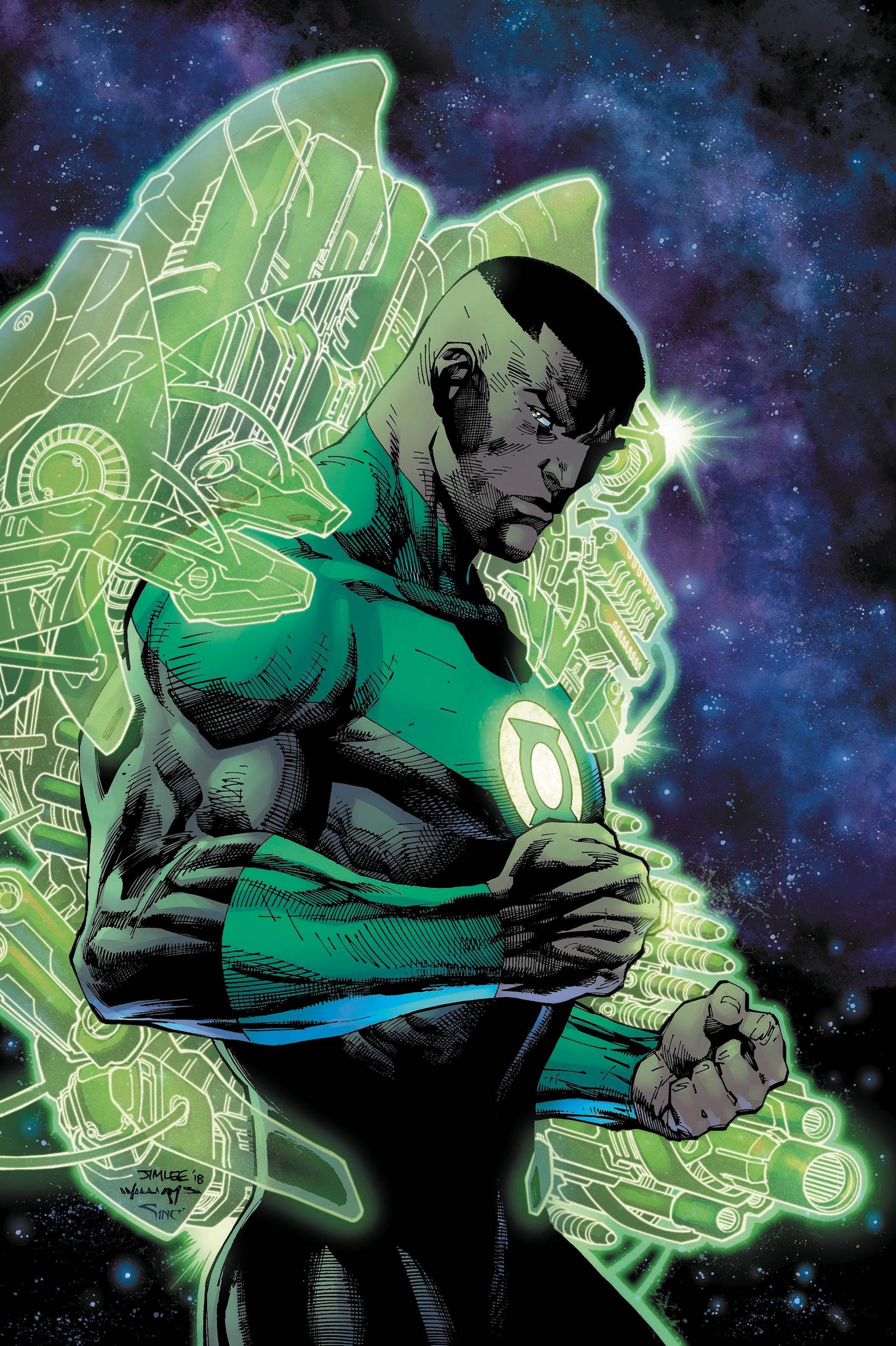 There may be a whopping eight human Green Lanterns, but if you were born in the ‘90s, the one you probably hold near and dear to your heart is Green Lantern John Stewart. And if you don’t, you’re wrong.

John Stewart is one of the coolest, most confident Green Lanterns, and out of all of them, has the most leadership qualities. In the confines of DC Universe, he’s regarded as one of the best Green Lanterns. But in our world, we don’t see much of him. He may be around a lot, but most of the time, he’s just that: around.

Despite a fifty-year history in the comics, he’s rarely had the spotlight. That is until fairly recently And given that, he’s been able to shine. It’s my hope that DC can give other non-traditional main characters the opportunity to flesh out some of their nuances and shine bright as well. If John Stewart can do it, anyone can.

Created in 1972 by Dennis O’Neil and Neal Adams, as a backup for Hal Jordan and Guy Gardner. He’s since been a main staple of the Green Lantern Corps, and if you are a religious reader of those books, you’ll see him quite a bit, often in important moments in the DC Universe.

So why am I wasting my time complaining about his lack of visibility? Because we can always do better, that’s why. And if Batman and his merry band of nocturnal vigilantes can have a plethora of books on the shelves giving a myriad of characters detailed focus, so can the Green Lantern Corps and the heroes in their ranks.

Don’t get me wrong, John Stewart has had a few pillar moments since 1972. After failing to save the planet Xanshi, he dealt with the weight of failure on a massive level for quite a while, spinning into his first solo title Green Lantern: Mosaic, where he took care of the Mosaic World, which had large sections of cultures from multiple planets trying to coexist in one setting, working through his inability to save Xanshi along the way.

From there he spent some time with the Darkstars, another intergalactic police force, but he ultimately decided to rejoin the Green Lantern Corps, getting in the thick of things as one of Sector 2814’s main Green Lanterns. He’s even been a core member of the Justice League a few times.

John’s been the main dude on occasion. He’s been in them trenches, but from a narrative standpoint, we haven’t seen a lot of development for the character since Xanshi blew up, and that was in the late ‘80s, early ‘90s. That is until this past year, in Geoffrey Thorne’s Green Lantern series. But we’ll get into that a little later.

If you’re my age, which is mid to late twenties, or even a little older, you mainly know John Stewart from the famed Justice League cartoon that we all grew up watching on Saturday mornings. The roster for this show had the Trinity, as well as The Flash, Hawkgirl, Martian Manhunter, and Green Lantern. But it wasn’t your dad’s Hal Jordan Green Lantern, we got John Stewart. And let me tell you, getting John over Hal at such a formative age, as a young Black boy, meant that I was never gonna mess with Hal in the same way that I messed with John. And I don’t think I’m alone in that.

Justice League soared where the comics often failed John. It developed him as a character, not just within conflict, but as a person in his regular life as well. We got to see him spend time at home and interact with his community. We got peeks into his background as a Marine and an architect, and we got to see him explore his complicated relationships, often as one corner of the love triangle featuring him, Hawkgirl, and Vixen. It was a golden era for sure.

A lot of this was because of the late, great Dwayne McDuffie, who undoubtedly brought a lot of lived experience and authenticity to the fleshing out of John’s character.

As I got older and ventured into comics more, I yearned for more John Stewart content and found that it was really lacking. As I stated before, he’s always around, but the comics never seemed to focus on the rounding out of his character in the same way the show did. This would be fine if no comic characters got that treatment, but Hal Jordan being the golden child of the Green Lantern Corps in the comics meant that all that nuanced development went to him.

This made me mad. The blueprint was clearly laid out by Justice League, why weren’t we getting more John Stewart content injected into our veins on a monthly basis?

Honestly, while John Stewart is a part of every main DC event, and often part of some flagship books, it wasn’t until Geoffrey Thorne’s Green Lantern series from last year that I felt that John Stewart finally got some shine in the comics the way I’d been hoping for.

The series shared two protagonists: John Stewart, and Jo Mullein, and each issue told seemingly isolated stories in the aftermath of Oa’s central power battery exploding. John Stewart, newly appointed leader of the Corps was on a mission in space when the battery exploded, stranding him and many others lightyears away from any way to get home. Jo Mullein, on Oa with Simon Baz when it all went down, is now the sole Lantern with any juice, as her ring has a different source of power.

Over twelve issues, we see both protagonists painstakingly grow and evolve without the structure of security they’ve grown accustomed to. John in particular has to grapple with who he is outside of being a Green Lantern, and away from anyone he knows. It was a must-read comic for a full year, and I’m so happy we got it.

It’s not done either, as John Stewart’s story is spinning into another book coming out later this year, a one-shot called John Stewart: The Emerald Knight.

Look at my boy shine. He’s really out here. This is the type of growth I’m talking about. It’s not enough to simply be around. It’s not enough to have cool double-page splashes with sparingly cool moments. We want growth for our characters. We want change. We want ups and downs. I know it’s a lot to ask for when, at the end of the day, these characters are run by a company whose sole goal is always to make money, and being safe and consistent with what works is the option that promises the most money. However, when you take a chance and give a character the spotlight who normally doesn’t get it and give a creative team with the passion to give that character some nuance the reign to do so, you are normally gonna get something special.

Who Else Could Use Some TLC?

Now that we’ve seen how there can be success with a character when you give them a chance to shine, I’d like to talk about a few others who I think deserve this same treatment. They’re characters that we see all the time, but you can look at their storied history and not find much of a change since their inception.

With the Tantu totem, Vixen is able to conjure the spirit and abilities of any animal, giving her a myriad of powers. Tied to her Ghanian heritage, there’s a lot of potential to flesh out a culture that many comic readers may not know about, as well as see how African Americans grapple with the loss of their culture in relation to the slave trade. Mari McCabe, Vixen’s alter ego, is an American, and her connection with the totem not only gives her an immense powerset but a tie to her past. Learning about the culture through her eyes would be an interesting read. I’d read that twelve-issue series in a heartbeat.

This is one I can talk about forever. Cyborg has the potential to be one of DC’s most important characters, and I won’t shut up about it until it happens. This is part rant, part manifestation.

After a horrific accident left most of his body obliterated, Victor Stone was grafted to an alien alloy that was able to not only keep him alive, but rebuild his body, and grant him superhuman abilities.

Cyborg has been given a lot of runway in the past decade or so, so I don’t want to sound ungrateful. But I want us to push farther. Cyborg is presently seen as the guy who can boom tube anyone anywhere, as well as being in a never-ending conversation about whether he’s more man than machine. I want better for my bro.

Cyborg is a Black man from Detroit. I want to see what that looks like in the 21st century. How he grapples with being a Black man that survived his traumatic experience and what that does to him internally.

This is the age of the internet, and technological advances are being made every day. Cyborg can and should be at the forefront of that. He’s from the city of industry, and he’s a physical manifestation of that. I know they call Superman the “Man of Tomorrow,” but I really think it’s Cyborg. Superman isn’t even from here.

Alright, I’m gonna shut up now. I just want to see my dog eat like John Stewart, that’s all.

All and all, I’m saying that when you give characters the limelight and put the right people behind them, it can yield some pretty fruitful results. John Stewart is proof of that. I hope they continue to let dude shine.