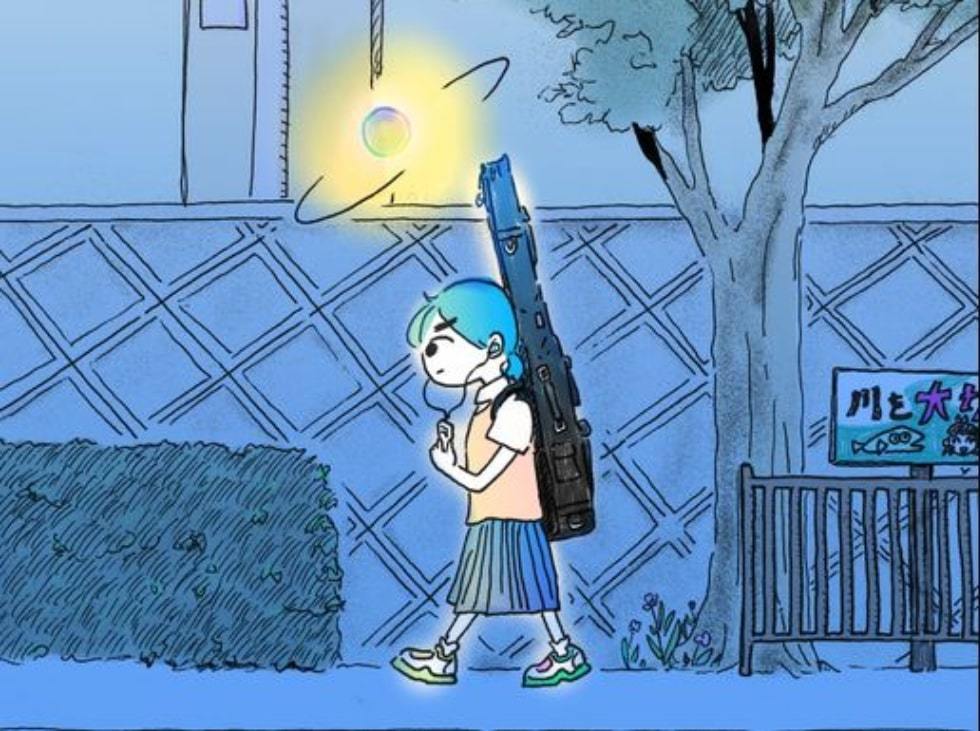 September has finally rolled into the arena and it’s still too hot for sweater weather and anything pumpkin spice, if that’s your thing. This is a perfect time for a seasonal check in to spotlight a few gems on my physical and digital bookshelves for anyone looking for some new manga to read! Romance, school life, yakuza–you name it! I got it!

Blue Period is one of my favorite ongoing manga series at the moment. When I reviewed the first volume, I wrote that it was a stunning debut about passion, art, and youth. As I kept reading this series about a high school kid who stumbled upon a new passion: painting, I was not prepared for the amazing story I would lose myself in. Hitting somewhere genre-wise between seninen, drama, and school life, it has a healthy dose of coming-of-age vibes too. Yatora, our protagonist who has had a late start in creating art enrolls in prep school to help him prepare for art school exams. It was a thrilling arc that really resonated with me as he constantly found himself hitting walls again and again as he was figuring out his weakness as an artist and how he saw the world.

Catching up with volume seven revealed that our boy earned his way into the nation’s most competitive art school in Japan. Yatora is OFFICIALLY A COLLEGE STUDENT. This volume was such a gut punch when I first read it. Yatora has been so gun-ho on creating art and his first semester as a student has come with such crippling self-doubt and hardship that he’s almost at a complete loss on why he is even there. Volume eight picked up the pace with the mangaka going hard in the paint on fleshing out a question I’ve had since volume one: Who is Yatora Yaguchi? Who is he without this passion for art? Who is he as a person without a paintbrush or pencil to sketch? For a “manga about the struggles and rewards of a life dedicated to art,” I continue to keep this series in my reading rotation. Yatora’s first semester as an art student in college is such an engaging story that continues to leave me entirely in my feelings as I read on, cheering him on! New perspectives, new friends, and new ways to consume, observe and create art makes this journey of his never dull and one I will continue to read.

The Yakuza’s Guide to Babysitting

Kirishima Tooru is the one and only right-hand man of the Sakuragi crime family. For him, he’s good at his job and doesn’t mind getting his hands dirty. He’s even earned the nickname “the Demon of Sakuragi.” To get him to use his head and be more responsible, he receives a new assignment like never before from the boss—babysitting his daughter! This manga follows the super heartwarming and super hilarious adventures of a beloved little girl and her yakuza caretaker!

The Yakuza’s Guide to Babysitting is perhaps the most wholesome pick on this list that I would recommend to anyone needing a manga rec that will pull at your heartstrings. I’ve been reading the series on the Azuki app to prepare for watching the anime adaptation that is now streaming. Yaeka, the boss’ daughter, who slowly learns to come out of her shell with help of her unorthodox family who are all doing their best to be the best support system they can be, is just what I needed. The relationship that Kirishima has with the kid is adorable to the third degree and so it has been enough to get me emotionally invested in in the manga just one volume in. I keep thinking of the author’s note in the back of the first volume where she says she had started to lose sight of what she wanted to draw after so many failed attempts to win contests to break into the manga industry. Finally, she allowed herself to create the story she wanted to read and what followed next was this work which endears me to this manga even more.

Tsukiko and the Satellite and Other Stories

The Azuki app has some indie and smaller press manga publishers and Tsukiko and the Satellite and Other Stories is a fave that I first found scrolling when looking for something new to read. This work is the first English-language collection from the Kyoto-based Japanese painter and comic creator MISSISSIPPI who is also known to be a zine maker. Altogether, five dreamy sci~fi short stories bring to life small, everyday moments including a long wandering father returning home, a bike repair job that’s more than meets the eye, and a summer laborer becoming acquainted with a mysterious girl by the river.

As my introduction to the creative known as MISSISSIPPI and my gateway title into her comics work, I found these short stories just so wonderfully weird in such a light-hearted way. I was so sad to get to the end of the book and promptly reread the entire manga in one sitting. These sci-fi-tinged shorts give us bursts of storytelling with such a playful tone and vibe that I loved them immediately. One of my favorite stories, “Audrey Hepburn 2049” (with translation by Anna Schnell) details a wonderful surprise when a beloved bike needs repairs and leads to an amazing discovery that any cinema lover would appreciate. Tsukiko and the Satellite and Other Stories show a very genuinely playful and fascinating side of manga that I want to see more of. I believe I am in good company as publisher Glacier Books has released another collection of work: Invisible Parade by MISSISSIPPI that includes the Ignatz nominated story “WINTER BREAK 2029,” which I can not adore any more than I do now.

After being dumped by her boyfriend of two and a half years, Koyori went to her longtime friend Hijiri’s house to drink away her sorrow…and ended up spending the night with him! The next morning, she sobers up, realizing what happens, and freaks out. Hijiri, who she’s known all of her life, has confessed! He loves her and wants to be with her. Koyori is blindsided, and she’s not sure how to reconcile the new development with someone she’s known since they were kids. She’s still pretty crushed on getting dumped and not at all sure if she’ll lose one of her closest friends if this new relationship doesn’t work out. Oh, and her ex wants back into her life now. Koyori needs to figure out what she wants before she loses it all.

As part of Kodansha’s Digital First Line, Changes of Heart proved to be a winner even though I’m not sure when I’ll be able to have it in print. I had heard of this manga a while ago and was eagerly awaiting its English-translated version, and I’m happy to read it digitally. For now. I’m always game for some Josei manga of grown women figuring out love, work, and life. Now, I do admit that the beginning of how Koyori and Hijiri started their relationship is a little sketchy (please drink responsibly, y’all!) but this series has really evolved into this beautiful story of two people who have known each other their whole lives receiving the love they always deserved. Some readers did not care for the seas of awkwardness that these two have to navigate across, but it only made their struggles and commitment to each other more sincere and worth reading. One of the major narrative themes in this manga is discovery, and it is incredibly sweet and moving to see these two rediscovering each other through the lens of being lovers and figuring out what a relationship means on their terms.

I found this little gem on the Book Walker site, looking for something new to read in the Josei category. Released in four chapters, Happily Divorced reads like a short anthology of a revolving cast of characters: mostly women experiencing the high and lows of marriage. The cutesy art-style doesn’t take away from the hard hitting stories contained here that offer up the many reason why a couple would separate and divorce. In one story: a husband is selfish and refuses to take his wife seriously, leading her to be bullied by his mother until she has her breaking point. In another, one wife is abused by her husband and emotional abuse is defined on the page along with her plan to get away to safety. While all the chapters are short, they are no less powerful and these stories that stayed with me long after I finished reading.

I have been interested in reading more manga anthology works since reading the Seven Seas Entertainment title, My Brain is Different: Stories of ADHD and Other Developmental Disorders. I believe this format does wonders in shorter spurts when detailing real life issues like how divorce affects families and the lives of women, in this case. At the end of the fourth book in this series is an author’s note not to be missed on the creators who interviewed people for this work with all the care and sensitivity for such a topic that is still taboo in many cultures and circles. I hope to see more Josei manga featuring narratives not just dealing with divorce but complicated relationships in this vein of storytelling. Reading Happily Divorced has also led to me further my search for more manga anthologies and similar works that do a lot in short page lengths.

What manga is a must read on your book shelves this Fall? I’d love to know. Sound off in the comments or via our social media channels!

Love manga? So do we! Check out more manga reviews and related content here!