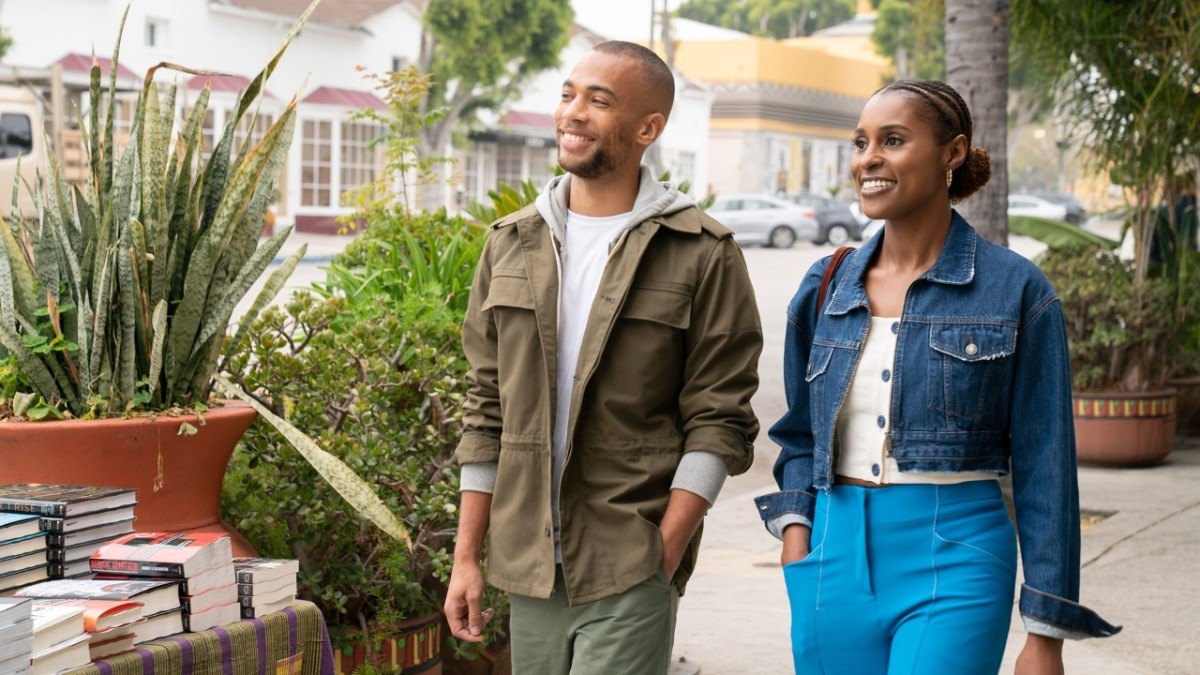 What’s up, y’all? After Daniel’s acting out last episode, Issa is down with moving on up, or at least moving on out. She’s all up in her new bathroom mirror cheesing when Daniel knocks on the door to drop off the last of her boxes. Things are still hella awkward between them, and Molly, who is arriving with some housewarming presents for her girl, is glad to see him go.

Molly is big-upping Issa on her fresh start, but Issa is way less certain she’s not going to end up trying to be a whole new me and end up in the same old shit. Wise. At least she’s learning something? Anyway, her bar is off to a good start with a bottle of Henny, and she has a foam mattress to sleep on instead of the floor. Molly insists she get rid of the old birthday cards, Zane novels, and Adele CDs Lawrence burned her after their first date 1,738,992 years ago.

Issa’s new life, though, means being the property manager here and on-call at all times. That means Issa finally gets to meet Trina, the resident the landlord mentioned when she first came to see the place. Trina, who is convinced there are squirrels in the walls–and they’re having babies. Ooookay. 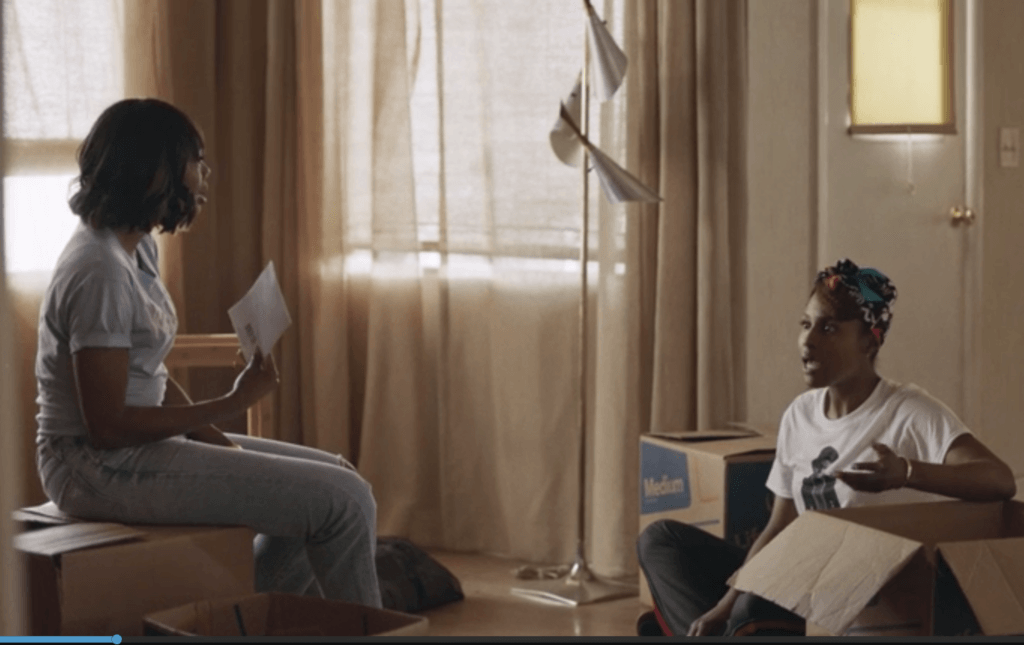 Later that night, while going through more mementos, Issa runs across her old rap journal from high school. She was so corny, but also talented, and she’s enjoying her little trip down memory lane.

Molly’s still having a hard time at her new job at the all-Black law firm. People are polite, but she’s not sure how to get a word in edgewise. And Taurean, well, he’s an arrogant ass. But maybe that is a point about which she can find solidarity with the other female associates. 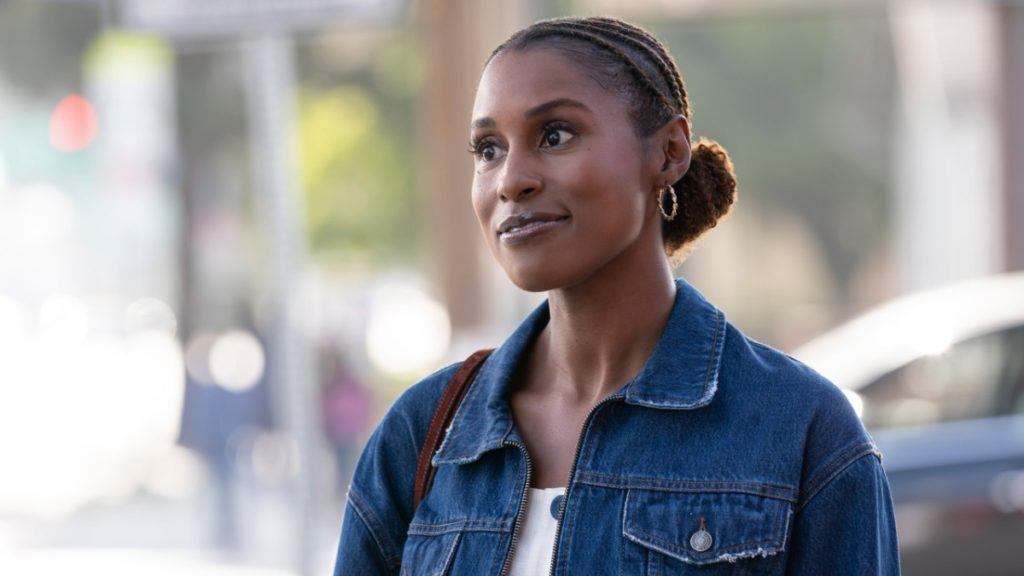 Blast from the recent past.

In the We Got Y’all world, Frieda lets Issa know that she’s good to go back into the field. So maybe things at work are looking at up? Issa decides to treat herself to some fancy tacos at the shop nearby when suddenly she hears “Party Lyft!” and her taco hits the ground. Oh, shit. It’s that hot-ass dude she gave a ride to in the season premier who ended up in a fistfight with that much bigger cat who refused to put out his blunt in the back of Issa’s ride. Nanceford? Nah, his name is Nathan, but Nanceford sounds better–almost as good as he looks. And since it’s going to take eleventybillion years for their tacos to be made, they decide to take a walk to Leimert Park.

Turns out Nanceford is a barber from Houston, so he’s not trying to hear anything about barbecue in Los Angeles, but he’s impressed by the rest of Issa’s tour. He’s funny, and she’s clearly feeling him. In fact, Issa’s feeling him so hard, she blows off a text from Ahmal at the airport (oops) and then a text from Frieda, who still needs to talk to her about her new work assignment (double oops). But now Nanceford wants to see where Training Day was filmed, so their walk continues.

Meanwhile, Molly is back in her therapist’s ridiculously beautiful home office, venting about her job. It’s Taurean, and not fitting in, and more than anything, how hard it is to start all over again. Then she mentions that since Dro, she’s trying to not get stuck in another situation where she’s settling, but seems that Molly somehow has managed to not even mention him to her therapist. Whoops. 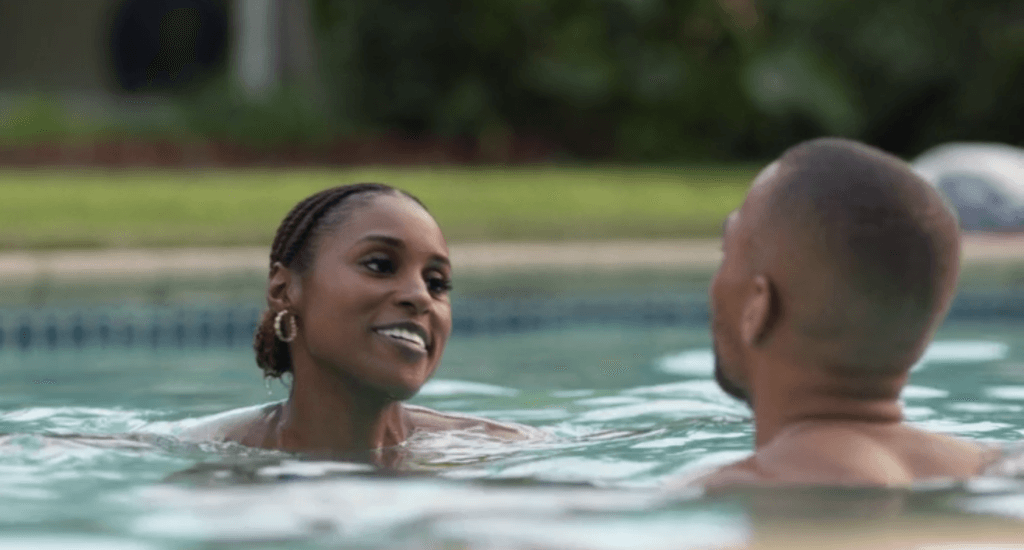 Party Lyft and Nanceford have made it over to “the hood,” which Nanceford feels should indeed be in quotes, since he thinks it looks a lot better in L.A. than it does in Houston. They decide to play a quick round of Truth or Dare, which means the skeletons are tumbling out of the closet. Issa comes clean about the fact that her last relationship ended because she cheated, and Nanceford seems impressed by her honesty. He asks her if this was her neighborhood, and she says no, she lived up on the hill.

So that’s where they head–the house she lived in when she was a kid. Nanceford dares her to break in, so they can see the pool she barely got to use when she was a child because her parents divorced shortly after they got it. In they go, and now it’s his turn: Issa dares him to jump in the pool, naked. Damn, Iss. That’s brazen. We appreciate you, girl.

But he’s not doing this alone. Once Nanceford’s in the pool, he dares Issa to jump in, too, and she does–not that he had to beg or anything. Apparently it’s cold, though I swear I see steam rising off the water. Issa confesses that she used to use a rock in the backyard as a stage, and tells him that she used to rap, and still does. He’s captivated. However, when she notices a scar on his shoulder and asks about it, Nanceford waves it off. So now Issa is changing the game from “Truth or Dare” to “Truth or Truth.” She doesn’t find out what the scar is from, but she does learn that Nanceford’s place got flooded during the hurricane and that’s what motivated him to make the move from Houstom to Los Angeles. Looks like everyone’s out here trying to start over. Issa confides that she, too, wants to make some changes, especially with her job. She wants to do something that means more to her, and that involves music.

Because things are what they are, it takes about five seconds before some white dude is yelling, “Honey, call the cops!” because there are two naked Negros in his pool, so Party Lyft and Nanceford have to make a run for it. 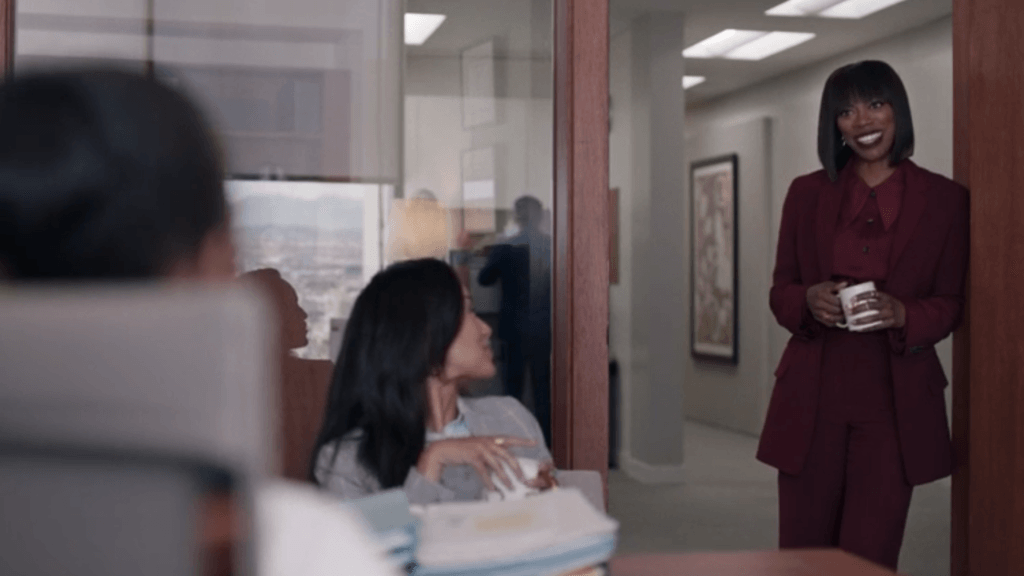 Molly is taking her therapist’s advice to heart–instead of trying to compete to be top dog, figure out where you can be helpful. She asks one of the female associates if she can help her with one of her cases. But Molly maybe has decided to spread herself a little too thin. When they drop by to see if she can help them out that night, seems she’s also helping Taurean with his case. Molly. That’s not how you make friends and influence people.

Back at Issa’s new apartment, she and Nanceford sit on boxes to eat their now-cold tacos, and they end up making out. Which is when there’s a knock at the door. Looks like Trina has a son, a rather precocious one at that, who’s interrupting the festivities because his mama said that Issa must have changed the locks to their apartment, and they can’t get in. He also wants to know if she and Nanceford are “eatin’ tacos and kissing on the mouth.” Oh, dear. Trina is clearly going to be a problem. Anyway, Lyft Bae dips out, but they clearly are planning to see each other again. (Maybe after Coachella in the next ep, which Issa is texting with Kelli and company about. FORESHADOWING!)

Anyway, the next morning, Issa finally dumps the trash box full of Zane and the Adele on her way to the office. Once she’s there, we get a better view of the We Got Y’all staff–it really is very ecru. When Frieda comes over to talk to Issa about her new assignment to a middle school, Issa has just…had enough. She says she can’t do it anymore and quits.

Wow. Didn’t exactly see that coming. I mean, sure, kinda. But maybe not that abruptly. Good thing her rent is half-off. Just means she’s gotta get the squirrels out the walls, I guess.